This past August, Joe Rogan celebrated 20 years in stand-up comedy, and he feels it's been a strange ride. He's been a sitcom star ("News Radio"), a popular reality host ("Fear Factor"), and now provides color commentary for the Ultimate Fighting Championship.

But the thing he's been doing the longest, and the thing he's best at, is stand-up comedy, as evidenced by last year's Showtime special "Joe Rogan Live" and the comedy album "Shiny Happy Jihad." Rogan got his start here in Boston. He still remembers the day — it was Aug. 27, 1988, at Stitches on Commonwealth (now the Paradise Rock Club). He went to Newton South High School and taught martial arts at Boston University and at a school in Revere before giving comedy his full attention.

He'll celebrate his two decades in comedy tonight at the Wilbur Theatre. We caught up with him by phone this week to talk about Boston comedy, "Fear Factor," and the UFC.

Q. What's it like looking back on 20 years of doing stand-up?

A.It almost doesn't even feel real. Almost feels like I'm talking about someone else's life. Twenty years is a long time. When I think about the first time I did stand-up, I don't even feel like I'm the same human being. It's very strange.

Q. How important was Nick's Comedy Stop when you were coming up?

A. Boston was hugely important, not just Nick's Comedy Stop. But Stitches, Stitches played a huge part. That's where I did my first open-mike night. I did a lot of the open-mike nights there, worked on a lot of material there. I think that's also where I got my first professional gig, at Stitches. The whole Boston scene was just a very unusual scene for comedy. In the late '80s, when I started, there was really no place like that, where you have an environment where, first of all, where you have all these national headliners. They should be national headliners; they're local headliners. Guys like Don Gavin and Steve Sweeney and Kenny Rogerson. I got to see all these great, great comics.

Q. Do you feel you had something to prove as a comic because people knew you from "Fear Factor" or non-stand-up jobs?

A. [It's] not that I had something to prove, but I definitely wanted to have something people could watch. I had a reputation for being a television host, from "Fear Factor," for doing something that's not funny. Yet I'd been doing comedy for so long, but all I had out was a CD that I had put out in 2000, and I had a lot of new material.

Q. Do you feel that you surprised people with some of the material on the Showtime special and "Shiny Happy Jihad"?

Q. What do you tell people who don't know much about the UFC?

A. That's an interesting thing, because a lot of people just assume they're talking about cage fighting, and they assume that anybody who's going to come and see it is a [expletive] moron. They're going to be a person who just wants to see death and destruction and people beating the crap out of each other and the downfall of civilization. It's really not like that. It's just a really intense form of competition.

It's also strange because of my kind of comedy. My kind of comedy is, I talk about all sorts of things. I talk about drugs and life and sex, the mysteries of space, and the way we look at the world. It's a very strange world that we live in that we literally are on a rock flying through the universe. We're flying through space and no one ever brings it up. You ever stop and think about that? Very few of us ever do, including me. I talk about it onstage, but through my daily life, how often do I really think about the fact that we are literally flying through the universe? And sometimes that kind of thinking doesn't lend itself to the typical UFC fan. It just makes it more of a challenge in how you deliver it, more of a challenge in how you phrase things. 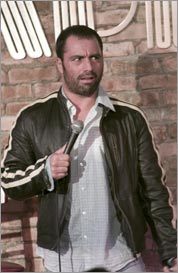