At home with the past

LEXINGTON - People make stuff. That much we know. Why they make stuff is much harder to say.

The kind of "culture" that routinely gets written up in newspapers and is taught in school - I'm talking about fiction and poetry, fine art, the movies, music, the performing arts - is one kind of making stuff. Its agents place a premium on originality and aim to communicate to a broad audience.

But there is another kind of making stuff that, though it also falls into the category of "culture," tends to thrive away from the roving, jittery, inconstant flashlight of the mass media.

This kind of creativity is concerned less with originality than with maintaining time-honored traditions, and it speaks, for the most part, to a small audience - anyone, that is, who feels connected to those traditions and the communities they bind together.

A lot of people are starting to worry about this kind of making stuff, which we may as well call folk art, though the category embraces more than just embroidery and baskets: It includes the making of weather vanes, decorated duck decoys, mortar-less fieldstone walls, musical instruments, sacred art, festival costumes, tin men, and decorated eggs.

The people who worry most about this kind of stuff are called folklorists, and their fear is that people today lead busy lives, are constantly moving from place to place, and watch too much television.

Their fear seems well-founded to me. I worry along with them. I think, for instance, of my father, who loves boats and so decided, with a friend, to build a yacht from scratch while his children were still young (it's still sailing); who loves weaving and so built a loom (still in use); and who loves carpentry and so built half of the furniture in my childhood home (OK, that one couch was a bit uncomfortable). I, on the other hand, watch television and do a lot of lying around reading. I don't make anything.

I may be an extreme case, but I think I am symptomatic: None of my friends makes anything either.

The good news is that a lot of people out there are still making stuff. Not just old people, and not just people who live in rural Peru or eastern Uzbekistan and make stuff for a tourist market. A great many of them live in Massachusetts, and folklorists in this state have been working hard over the last two or three decades to find out who they are, what they do, and why they do it.

If you want a taster, you should see "Keepers of Tradition: Art and Folk Heritage in Massachusetts," an exhibition at the National Heritage Museum in Lexington. The show, which is modest in size but rich in content, was organized by the state's chief folklorist Maggie Holtzberg, working in tandem with the museum and the Massachusetts Cultural Council.

Holtzberg says she spent years dragging her young son around ethnic festivals and to fiddle conventions and folklore interviews all over the state. She also deployed dozens of fieldworkers, who have taken notes, taped interviews, and forged relationships with many kinds of makers.

Holtzberg and her colleagues have tried to appreciate more than just the aesthetic qualities of the objects they find, emphasizing the social and historical contexts from which they arise.

The show begins, for instance, with a dazzling costume from Boston's Caribbean Carnival made by Tamara Shillingford. The festival, held at the end of August, is rooted in Mardi Gras and, according to band leader Errol A. Phillip, the kind of celebrations that took place "when slavery was abolished. You're giving praise for freedom."

The link with emancipation is tenuous today, but the jubilation persists, as does a spirit of poking fun, competing, and, since 1994, dressing up in full costume, known in the Caribbean as "playing mas." The costume here is sensationally vibrant, and a screen showing footage of it as worn in the carnival makes it seem even more so.

In a similar vein - but emerging from a completely different tradition - the show includes three tin men made by retired sheet-metal workers William Walsh, Glenn Walker, Daniel Hardy, and Richard Clarke. Tin men appear in another local festival with deep roots, the St. Patrick's Day Parade, and they are traditionally a way for metal workers to advertise the products of their trade, recruit apprentices, and display union pride. The three here were made especially for this show. "We are the only trade that takes a flat metal stock from the mill and rolls it, forms it and fabricates it," says Walsh.

The show also includes a small array of musical instruments, including a Walters button-box accordion belonging to Joe Derrane. Derrane played the accordion in a popular band that attracted huge crowds of Irish immigrants to ballroom dances in the '40s and '50s until the dances and the music fell out of fashion. Brides, says Derrane, "would tell you, 'Well, I hear you have a great band, but I don't want that accordion.' "

A music critic for the Irish Echo heard some recordings of Derrane playing and wanted to know when he had died. "He's not dead," came the reply. "I just talked to him a month ago. He's living in Randolph and this is his phone number."

A folklorist's dream. Derrane was persuaded to pick up the button box again after decades of neglect, and he describes the day he first played for a festival audience again as - excepting his wedding day and the birth days of his children - "probably the single biggest day of my life."

As you wander around the show you see doilies and duck decoys, pottery and Portuguese crochet. There's not much logic to it all, and lumping so many utterly disparate cultural traditions together in such a small place is in many ways unsatisfactory. You are pleased to discover, for instance, that the tradition of Russian icon painting is carried on in Massachusetts by the capable hand of Ksenia Pokrovsky, but how might it relate to the beautiful hand-pierced and hand-carved lamp with a mica shade by Carl Close Jr. or the deerskin and porcupine-quill Native American shoulder bag after an 18th-century Anishinaabe design by Dave Holland

The answer is that it all comes under the umbrella of folk heritage. If that category seems a little too general and the objects that fall into it a little too arbitrary, remember that this exhibition is more than just an exhibition. It's one part of a much bigger project, which includes Holtzberg's great catalog essay (it explains the stories behind the various objects in some depth) and, beyond both the show and the catalog, a great deal of valuable documentation, which can only help in the attempt to keep these traditions alive and the effects of too much TV at bay. 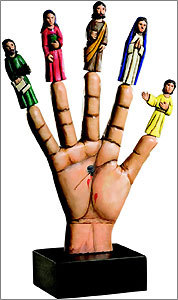 (Photo by Jason Dowdle) "La Mano Poderosa/The Most Powerful Hand," by Carlos Santiago Arroyo, is on view at the National Heritage Museum.

Keepers of Tradition: Art and Folk Heritage in Massachusetts