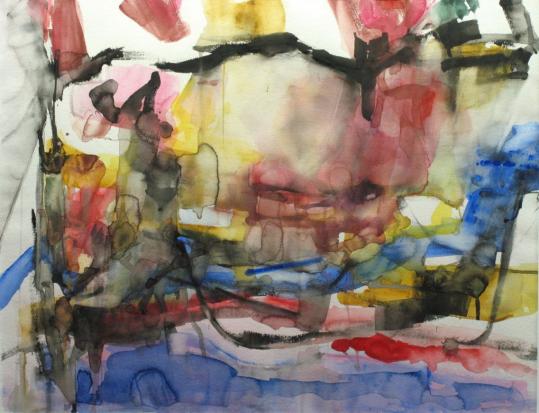 GLOUCESTER - Call Jane Deering peripatetic. Affiliated with London's Purdy Hicks Gallery, she stages winter shows in the Santa Barbara, Calif., area and summer shows in her home here. This year's fresh, eclectic exhibit, "CA{-2}UK," spotlights artists from California and Cape Ann (hence the "2" after "CA") alongside a handful of British artists. (It's open on Saturdays, otherwise by appointment.)

The works are as wide-ranging as Deering's travels, encompassing painting, photography, studio furniture, and styles as diverse as Cape Ann artist Erma Wheeler's watercolor "Quarried Waters," a shimmer of a rock-and-water landscape, and British artist Rana Begum's sharp, untitled screen prints sporting bold bands of color buzzing against one another intensely. Organized loosely by palette, the works together read like a rich conversation filled with surprises.

California photographer Christina Seely's haunting large-scale color series "Lux Portfolio" was inspired by NASA maps of regions of the world at night; the largest consumers of electricity glowed. Seely has traveled to those cities and photographed them at night from a distance, capturing their spooky illumination with long exposures.

"Lux Metropolis 35°00'N 135°45'E" shows Kyoto, Japan; the eerie shine of a pocket of forest in the foreground depicts lit pathways to the temple from which Seely shot the city, which spreads out in the distance enveloped in a purple aura. Her photo of Boston, taken over Dorchester Bay from Squantum, catches colored slivers of reflective light in the dark water.

British art star Cornelia Parker's "Beyond Belief" looks like spun gold; it's actually a former crucifix drawn into wire, a glittery tangle casting an inky shadow, asking what's left when the symbols we pour our faith into are gone.

Cape Ann furniture maker Jeremy Adams applies a wry twist to his beautifully crafted objects. His pair of end tables based on a design by the late modernist architect Gerrit Rietveld sport rectangular wooden inlays that suggest a grid but lack a grid's ho-hum regularity; there's a clever, offbeat rhythm to the tabletops. Jim Gaylord, a California artist, offers a cryptic, rich gouache drawing, "Blessing in Disguise," that moves from wooded landscape to black-blotted abstraction to elements of textile design with strange, satisfying logic.

Finally, Deering has turned a tool shed into an art space with several small, square abstract paintings by Gloucester artist Juni Van Dyke, who is the dealer's sister. They read like a diary, each a thought for the day. Some are vivacious, coated with resin, and pop off the wall; others sport softly toned veils and tracings; they pull you in. Deering's summer shows make me wish she exhibited in Massachusetts year-round. If she did, she'd never have brought this wild mix of artists together.

The allure of the sea
The wood carver James T. McClellan, who died in 2005, lived out his long life on the North Shore, building boats and organ screens, and carving doors and sculptures. His retrospective, "Carved and Gilded: The Sculpture of James T. McClellan," now up at the Cape Ann Museum, shows the artist's deft hand, his love of curves, and his passion for mythology. He was a romantic, a sculptor with 19th-century sensibilities making work in the 20th century.

Unfortunately, you step into the exhibit and immediately see a gilded American eagle - a well-made object, but one that's tough to put an original spin on. McClellan's sea horses and mermaids have far more character. Look at his mahogany sea horse with a gilded fishtail: A filigreed mane accents the muscled, curving neck; the tail spirals back playfully. The doors he carved for the Gloucester Lyceum and Sawyer Free Library follow the same maritime theme, with a magnificent, watery Poseidon pulled by a stormy team of horses. McClellan found his voice in the stories of the sea; his best work here channels the ocean's power.

Finding a balance
Julia von Metzsch got her bachelor's degree from Boston University last year, spent time studying in France, and returns to BU in the fall to pursue her master's. Her small paintings on wood panel, at Mercury Gallery in Rockport, entice with the loose, fluid texture of her strokes. They're all spare Cape Ann landscapes, with none of the sentimentality that beach painters are prone to, and none of the sunny light.

Von Metzsch strikes a balance between abstraction and representation; her brushwork, and the way she carves out sea, land, and rock with broad strokes, make each piece nearly abstract. Then there's that delicious moment of coalescence, when the elements meld together and you see a familiar place.

In "Magnolia Beach," a patchwork of rocks, each its own dab of paint, tumbles down the panel in gray, mauve, and blue; a fringe of grass, and its own fringe of shadows, stops the sense of their soft fall. The sky in "View of Cranes Beach" has been gently swiped with brown - von Metzsch often uses a wet brush; her paint is nearly diaphanous. The landscape below dances with daubs of paint. She's like a poet, distilling the essence of a place in a few small gestures.