It was over-the-top. It was labor-intensive. And it was spectacularly inventive. The jewelry made by Art Nouveau designers like René Lalique and Georges Fouquet around the end of the 19th century can seem heavy and overelaborated to modern eyes. But it turned the history of Western adornment on its head.

Don't worry if jewelry is not your thing. The Museum of Fine Arts' small but dazzling "Imperishable Beauty: Art Nouveau Jewelry" is a show you should see regardless. Anyone who responds to technical virtuosity of the highest order, anyone turned on by seeing an aesthetic sensibility taken right to the limit, and anyone even remotely susceptible to color is bound to fall under its spell.

Jewelry shows present a dilemma for art museums, which may explain why we see them so rarely. It's true that jewelry is one of the more imaginative arms of design, a field in which function tends to play second fiddle to aesthetics. But it has also been a field in which taste trumps art, in which ostentation and conspicuous expenditure can count for more than originality and aesthetic conviction.

So it was in 19th century Europe before Art Nouveau. Preciousness was the order of the day. Taste was governed by what has been termed "the tyranny of the diamond" - a habitual preference for glinting diamonds and platinum in designs that were formulaic and colorless.

Then came the fin de siècle. We know what a tumultuous period the 1890s were in art (any period associated with artists as magnificently overripe as Gustave Moreau, Paul Gauguin, Edvard Munch, and Odilon Redon has to be worth getting to know). So it's perhaps not surprising that jewelry experienced tropical spasms of its own.

The 100-odd pieces in "Imperishable Beauty," which was organized by Yvonne Markowitz, the MFA's curator of jewelry, all come from a single US private collection whose owners prefer to remain anonymous (although there are strong clues in the catalog). More than 40 of them are by Lalique, which is wonderful, because Lalique was the movement's unrivaled genius (he later became known as the preeminent glass designer of Art Deco, but it was as a trailblazing jeweler that he came to fame).

Lalique had a contrarian streak. You can see it in a piece like his "Branch Brooch with Cherry Blossoms," made between 1900 and 1902. The pink blossoms, each one exquisitely individuated, are made from clear glass lightly brushed with pink enamel and acid-etched to give it a soft, matte finish. Glass, you'll remember, comes from sand. It's cheap.

Now look at what Lalique has used for the branch, the part of the design relegated to a mere supporting role. Why, diamonds of course!

This reversal of ideas about inherent value - a seemingly perverse but aesthetically liberating urge to showcase inexpensive and unorthodox materials like enamel, horn, glass, and colored gemstones - was just one of the things that made the designs of Lalique and his contemporaries so fresh.

Another was their sensitivity to color. Inspired by nature, Art Nouveau jewelers explored the whole spectrum. And rather than seeking simply to dazzle with the unalloyed brilliance of precious stones, they favored milky and matte pinks and blues, as well as nerve-wrackingly irresolute greens that slipped back and forth on the spectrum between gold and blue.

Lalique, for instance, made a corsage here in the shape of pine cones enveloped in needles. It shifts between blue and green entrancingly. His pendant brooch with pink carnations, meanwhile, sets off its pink flouncing flowers with a purplish sapphire hanging like fruit below. The harmony is so close it's like hearing an oboe and female voice hold the same note until one slides almost imperceptibly down a tone.

The colors in a lot of the pieces here put me in mind of the cloudy, blushing hues of Redon or the late, shimmering pastels of Edgar Degas. Matte, in other words, but radiant. I particularly liked a small brooch by Louis Zorra, which sets the wildly mercurial colors of opal against a steady pale green enamel, deep blue sapphires, and a milky, misshapen pearl.

Zorra's design looks gracefully symmetrical at first glance. But on closer inspection, you see that its perfect balance is undercut by the gentle asymmetry of the golden claw holding the pearl.

This love of asymmetry, which can be seen all through the show, reminds us of the huge impact of the arts of Japan on Art Nouveau. (To illustrate the point, Markowitz has included examples of ukiyo-e prints, as well as various carved ornaments from Japan; there are also some contemporary posters, a pattern book, a Pre-Raphaelite painting and a sculpture by Auguste Rodin.) The Japanese influence went far beyond formal concerns into a philosophy that cherished plant life, animals, and the constant flux of the natural world.

One of the more interesting ways in which this attitude (which was also inspired by the nature-revering English Arts and Crafts movement) made itself felt was in the use of pearls. Instead of seeking out only the most perfectly formed pearls, designers like the Belgian Philippe Wolfers often chose the odd shapes of baroque pearls. These hadn't been in vogue since the Renaissance. Lalique, meanwhile, for a fringe necklace here, used 48 blister pearls - half pearls that have developed irregularly because worms or parasites invaded the oyster's shell.

But the restlessness you can feel in Art Nouveau design - its famous "whiplash" line and proliferating tendrils - was not just a response to the sanguine energies of nature. It was also an outgrowth of the weird, unsettling riptides convulsing fin de siècle Europe. Drug use, morbidity, an intensely rarefied aestheticism, and highly charged, violently contradictory conceptions of women were all part of the mix.

Women, in the world of Art Nouveau, were either dreamy and pliant or sexually malevolent. They were never a civilizing force or agents of their own fate as they came to be conceived of by the designers of Art Deco. (Art Deco, of course, is usually seen as "masculine" and streamlined in opposition to Art Nouveau's softer, more "feminine" aesthetic; but in truth, it was the Art Deco period, after the slaughter of millions of young men in the Great War, that allowed women to come into their own.)

At any rate, the darker, creepy side of Art Nouveau can be seen here in pieces like Lucien Gaillard's bulky "Beetle Necklace," with its dark, patinated silver, and Maurice-Philippe Fourain's "Pendant Necklace with Two Intertwined Serpents." Both are wildly imagined ornaments that warn off as much as seduce.

There are aspects of Art Nouveau jewelry - the curves, the color, the almost febrile intensity of the designs - that I love. But there are things that strike me, as I'm sure they'll strike many, as too much. I can admire, for instance, the intensity of the dragonfly brooches by designers like Wolfers and Louis Aucoc. But I would tend to steer clear of any woman who actually wore one.

Still, the beauty of this show is that, even if you recoil from some aspects of the aesthetic, you can become absorbed by the technical wizardry of the designs. The attention to detail (engraved decorations on hidden parts, natty removable armatures and so on) is one thing. But even better are the ingenious uses of cheap materials, and the elaborate treatment of surfaces to achieve finishes of unparalleled subtlety.

Read the short but excellent catalog, or better still, an article by Markowitz and her colleague Susan Ward in the July issue of The Magazine Antiques, if you want to learn more about these techniques. Failing that, just look. You will be richly rewarded. 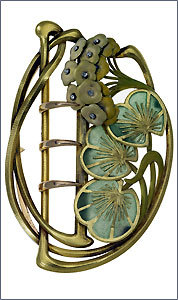