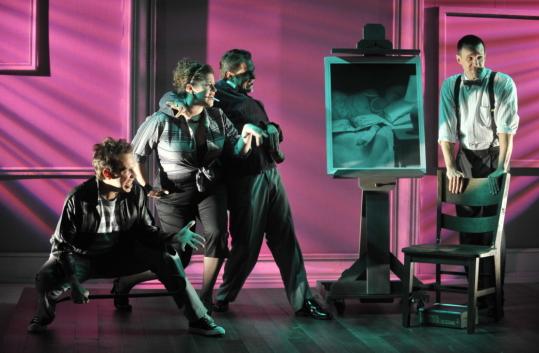 PITTSFIELD - Where do ideas come from?

Sometimes what seems like a sure thing is a bust. Other times, the most unlikely-sounding notion - making a stage musical, say, out of a nearly wordless black-and-white picture book - turns out to be just grand.

So where do ideas come from? It's a mystery.

That's not only the explanation but the premise of "The Mysteries of Harris Burdick," a short, smart, sweet new musical that is, in fact, based on a nearly wordless black-and-white picture book by children's author Chris Van Allsburg. Like the book, the musical is not a strictly-for-kids entertainment, but rather a haunting meditation on, and invitation to participate in, the creative process.

Van Allsburg's 1984 book consists of 14 mysterious drawings, with equally mysterious captions, that purport to be the work of an illustrator who dropped them off at a publisher's office, promising to return the next day and tell their accompanying stories, but who then vanished forever. What it really is, of course, is a chance for readers to look at these enigmatic but alluring images - children skipping stones and watching amazed as one skips back, a vessel that magically combines the best features of railway and sailboat, a house lifting off like a rocket ship - and make up stories of their own.

And that, essentially, is what the creators of the musical have done. "The Mysteries of Harris Burdick," which had a workshop production last summer at the Barrington Stage Company's Musical Theater Lab and is now completing a fully staged run there, begins as the book does, with a summary of the puzzling Mr. Burdick's visit to a publisher. Then it jumps back 20 years to tell the story behind the pictures - or, at least, a story, for part of the musical's own story is the one about how we all make up stories to explain the mysteries that surround us everywhere, and not just in books.

The story devised by book writer Joe Calarco, lyricist Nathan Tysen, and composer Chris Miller - who collaborated on "The Burnt Part Boys," a memorable coal-country tragicomedy produced here two summers ago and now slated for New York's Vineyard Playhouse - is a deceptively simple one. Simple, because it posits Harris Burdick's tale as a narrative he makes up about losing his child, and deceptively so not just because no such narrative can ever be simple, but because here Burdick's pictures combine to create a complicated alternative universe through which the vanished son travels in search of adventure.

This plays better than it reads, believe me. It also lasts only 80 minutes - long enough to engross the audience in both the parents' sorrow and the son's quest, but not so long as to sink under either grief or whimsy (except, perhaps, when the actors have to play annoying giant birds). Like the best of Van Allsburg's work (which to my taste sometimes has a heartless, airless solidity that can make his dreamscapes more oppressive than inviting), the show is muted, delicate, poised on a finely penciled line between innocence and experience. It leaves room for both heartbreak and wonder.

Tysen's lyrics are especially strong; as he did in "Burnt Part Boys," he finds felicitous but unforced rhymes, and his songs advance the story and enrich our sense of character with rare economy and verve. Miller's tunes are lovely, but too many of them sound alike, and they tend to roll seamlessly along in a smooth but sometimes lulling ribbon of sound. More variety in rhythm, style, and tone would make them more distinctive.

Even in its still imperfect form, though, "Harris Burdick" has a condensed emotional power and a unique style that are both well served by the young and talented cast here. Ben Roseberry, in dual roles as the son and the odd neighbor, is particularly quirky and touching, while Catherine Porter, as the boy's mother, imbues every note with longing and love. By the end, though, when the whole ensemble sings of being "drawn into the heart of a mystery," you realize that everyone, not just the ones at the center of the stage, has a story to tell, a mystery that draws us in.

Musical with book by Joe Calarco, lyrics by Nathan Tysen, and music by Chris Miller. Based on the novel by Chris Van Allsburg.