Redrawing the map of Hub galleries

The boxes, rolls of duct tape, and odd pieces of art scattered around the Allston Skirt Gallery might be mistaken for a witty conceptual art installation. But they're not. Owners Beth Kantrowitz and Randi Hopkins, in business nine years, are packing up their Harrison Avenue space for good.

In fact, Allston Skirt is just one of 14 key galleries in the South End and on Newbury Street that will have closed, moved, subdivided, or gone on hiatus by the end of the summer. That's more than one-third of the commercial galleries on Boston's contemporary-art scene. It's a seismic shift.

Barbara Krakow, whose blue-chip Newbury Street gallery has been in business since 1963, has never seen a shakeout like this. "This is the biggest change I've seen, and all at one time," she says.

A flagging economy and higher rents are helping to change the gallery landscape, but even more important may be two developments in the increasingly global contemporary-art market: the rise of international art fairs and Internet business, which are dramatically altering the way many galleries work and putting less-established dealers in jeopardy.

Finally, the shakeout has been triggered in part by an unusual coincidence: Several multiyear leases on Harrison Avenue and Newbury Street, Boston's two gallery districts, are ending this year, leading to an art dealers' version of musical chairs as spaces open up.

Some longtime gallery owners are opting out, they say, because it's time for a change. After running a successful gallery on Newbury Street for 15 years, Audrey Pepper closed Pepper Gallery in May to become an art consultant. After 16 years, Bernard Toale, who runs one of Boston's premier galleries at 450 Harrison Ave., is closing Saturday and passing his roster of artists to his longtime gallery director, Joseph Carroll, who will renovate and open a reconfigured gallery in September as Carroll Inc., with space for an office and small gallery for Toale's new art-consulting business.

Particularly squeezed in the current climate are some small galleries - including Harrison Avenue's Allston Skirt and MPG Contemporary - that have a taste for emerging artists and try to keep their prices down.

At Allston Skirt, where most works sell for about $2,000 to $5,000, Hopkins and Kantrowitz weighed a rent hike - from roughly $1,800 to more than $2,000 a month - against the prospect of fewer sales in an economic downturn. "To keep that equation equal, we'd have to sell more," Kantrowitz says.

Michael Price, who is closing MPG Contemporary on July 12, says the decision was straightforward: "Last year I lost money. The lease was up. The rent goes up. The economy looks bad. It's that simple."

But while some galleries suffer, others seem immune to the pressures. Galleries that show just young or local artists "can be 100 percent successful, sell out every show, and still not be able to survive," says Krakow. But, she adds, "There's a pocket in the art world not affected by what's going on economically at all." Krakow has such internationally renowned artists on her roster as Sol LeWitt and Jenny Holzer, with prices ranging from $2,500 to $150,000. "The Internet is major," Krakow says of her business. "We have 10,000 or 12,000 people a week go to our website."

Dealer Ellen Miller also has embraced the Internet. "The gallery has become a place in which to house the work and give artists the opportunity to think about their work, but it's not the place where the selling happens," says Miller, who is moving her Miller Block Gallery from 14 Newbury St. to the former Pepper Gallery space at 38 Newbury St. on July 1. Miller estimates that website visits and e-mail now generate 60 percent of her gallery's business.

Art fairs make up another 30 percent of sales, Miller says. The emergence of the international art-fair circuit in the last decade is a major reason for the current shakeout, enabling some galleries to prosper while less-established ones fall by the wayside, according to Bill Arning, curator at the MIT List Visual Arts Center and an avid gallery observer.

The big fairs - in the United States, they include Art Basel Miami Beach, Pulse, and Scope (the latter two in both New York and Miami) - screen the galleries they let in for the quality of their work and then charge a hefty fee. Dealers who show and sell art from booths at such fairs know they can reach high-end collectors and museum curators from around the world. And buyers know they're sampling from an elite, preselected group.

"Art fairs have changed the idea of being a gallery in a smaller city," says Arning. "[They] are the great leveler for regional galleries and New York. You have access to all the big collectors if you're in the bigger fairs. . . . [But] it puts pressure on the local scene. If you don't put incredible resources into going to art fairs, you may be in trouble."

Rob Clifford and Jim Smith closed Clifford Smith Gallery on Harrison Avenue more than two years ago. They say they think all the time about opening another gallery, but with a different business model. "If someone tells us they're thinking of opening a gallery, we say, 'Make sure you've capitalized enough to hit the art-fair scene for a year or two until you can get established,' " Clifford says.

It's a high threshold. "If you have a couple of bad art fairs in a row, that can quickly drain the resources of a small gallery," says Steven Zevitas, who is moving his gallery in September from a third-floor perch at 450 Harrison Ave. to a more prominent storefront mezzanine space that recently opened up, and who also publishes a national art quarterly. In other cities, fair expenses are "a major cause of why they have to shut down," he says. "Booth price, hotels, shipping - you're in for $10,000 to $50,000."

Camilo Alvarez's Samson Projects gallery and Colin Rhys's buzzed-about Rhys Gallery, both on Harrison Avenue, are active players on the art-fair circuit. Alvarez says that he went to six or seven fairs this season, and that of his approximately 40 regular clients, only two are Boston collectors. Rhys, who recently had a successful trip to the Scope Basel fair in Switzerland, no longer believes Boston is a good city from which to run a bricks-and-mortar gallery. In Basel, he says, "We sold things we never would have sold here. It just doesn't happen here."

Rhys closed his Rhys Gallery on Thursday and plans to open a new gallery outside Sao Paolo, Brazil, in August, with another one in Los Angeles next March. "In Los Angeles, you have collectors flying in to look at the art scene there," he says. "That doesn't happen in Boston."

Galleries that remain in Boston face the same scene artists and dealers have carped about for years: A limited number of collectors, many of whom go to New York or art fairs when they want to buy.

"There's no cachet of discovery of finding something in Boston," says Smith. "That excitement of discovery works in the art-fair setting."

"Boston is a small market, and people are looking to get outside this market," says Howard Yezerski, who plans to close his Newbury Street gallery on Saturday and reopen in a newly developed building at 460 Harrison Ave. in September, where he says rents are about half of those on Newbury Street. With a roster that includes artists whose work is shown at museums around the world as well as local and emerging artists, Yezerski estimates that 60 percent of his business happens in the gallery, 20 percent on the Internet, and 20 percent at art fairs. But he expects those percentages will change.

"We've only been doing fairs for a couple of years," says Yezerski, who has been in business for 40 years. "We're just beginning." 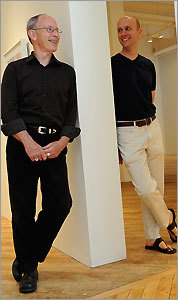 Galleries on the move