Cartoon imagery, and other wonders of the print 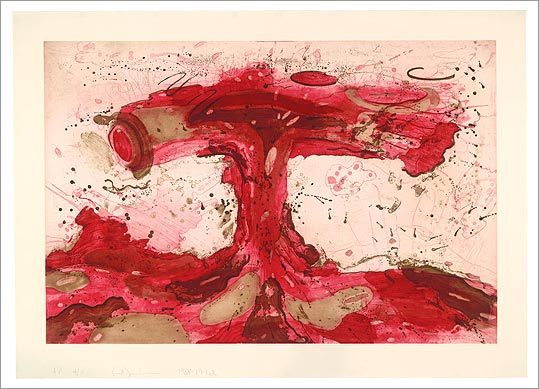 Carroll Dunham is known for exuberant works inspired by genres from Abstract Espressionism to Surrealism. Among his prints on display in Andover are "Point of Origin" (above). (Courtesy of Universal Limited Art Editions)
Email|Print|Single Page| Text size – + By Sebastian Smee Globe Staff / June 20, 2008

Technique is tedious. Descriptions of technique are more so. And nothing, I find, makes the eyes glaze over quite as effectively as written descriptions of printmaking techniques.

So let's not talk - at least not right away - about Carroll Dunham's deft use of drypoint, his intimacy with the intaglio process, or his mastery of the monotype. The Addison Gallery of American Art's brilliant Dunham show may be a dream for those who thrill to the endless possibilities offered up by printmaking. But there are other things that stand out about Dunham's art.

Like, for instance, his imagery. If you recoil instinctively from images littered with phallic shapes spurting gooey drips, banana-shaped breasts, and sundry hairy orifices, I recommend you stick to the glossary at the back of the catalogue raisonné of Dunham's prints - an impressive tome released by the Addison and Yale University Press to coincide with the show. There you will get cool and cogent explanations of the difference between screenprints and siligraphy, spitbites and sugar lifts.

But sooner or later you'll have to face it: The decorous, connoisseur's atmosphere that swaddles most discussions of printmaking is simply obliterated by what's on view in "Carroll Dunham Prints: A Survey."

There's comedy in the contradiction. There's also - in just a few cases - something aesthetically grating, as the feeling builds that Dunham may be a little too precious about materials and technique. If he really wants to blurt forth imagery of this kind, he should make it a genuine blurt, not a lithographed blurt on Fabriano Esportazione paper or an etched blurt with aquatint on fawn Stonehenge paper.

Nonetheless, I found this show riveting. Both the exhibit and the catalogue raisonné are the upshot of Dunham's decision to give his entire printmaking archive - more than 200 objects - to the Addison. (He visited the gallery regularly while attending Phillips Academy as a student.)

Dunham now divides his time between New York City and Cornwall, Conn. He came to prominence in the 1980s and '90s with exuberant paintings and drawings that drew inspiration from a pedigreed combination of Abstract Expressionism, cartoon imagery, Art Brut, and Surrealism.

He only began printmaking in 1984, when he fell in with Bill Goldston, the director of Universal Limited Art Editions, a printmaking company set up by Russian émigré Tanya Grossman with a history of collaborations with notable artists, including Larry Rivers, Robert Motherwell, Jasper Johns, Cy Twombly, and Barnett Newman.

Goldston presented Dunham with a lithography stone, inviting him to make a print. According to Dunham, the thing sat around in a corner of his studio for months while he mentally - and sometimes literally - poked at it and prodded it, trying to find a suitable approach.

According to curator Allison N. Kemmerer, writing in the catalog, Goldston had promised Dunham that printmaking would "break apart his thinking." He was right, and eventually, with the help of ULAE's master printmakers, Dunham came to relish the process. Unlike most artists who make prints, he has refused to settle into a groove, delighting instead in exploring as many techniques as possible. It has become "the third element" in his practice (along with painting and drawing), as rich in potential as the other two.

The multilayered process of printmaking produces a distancing effect, with the result that the final image usually lacks the immediacy of paint on canvas, or pencil on paper. But many of Dunham's prints feel at least as visceral as his paintings and drawings.

The early works - abstract lithographs using either simple black or combinations of red, yellow, green, and blue - have a tentative feel about them. Dunham's style is unruly enough to embrace accidental effects. The sense of discovery and surprise is palpable.

Within a couple of years, Dunham was making lithographs with as many as 14 bright colors, and trying out colored etchings. The breakthrough seems to have come with a series of large intaglio works ("intaglio" - now try not to nod off - simply refers to a family of techniques such as etching and engraving in which the image is cut into a plate. Ink, applied all over and then wiped off, remains in the cuts and then marks the paper when the two are pressed together).

Made between 1988 and 1995, this series of four works uses the same graphic image - a sort of top-heavy T like a blacksmith's anvil - as a simple compositional device. But Dunham went to town extending and accessorizing it, with layered colors, scrawled letters, stains, scratches, and smears.

The best of the four is called "Point of Origin." The anvil shape is mostly red, the background white but stained partially pink and pockmarked by all manner of abrupt-looking marks. At first glance the image seems to have surged to life of its own accord. It's only on reflection that we register how complex the process of making it must have been.

Some of the drypoint etchings that followed in a series called "Shadows" are deliriously complex. They combine strange biomorphic shapes, many resembling sexual organs, with exciting variations of tone and hatching.

They reminded me of late Picasso - especially the Spaniard's outrageously sexual etchings riffing on Degas's brothel monotypes and Rembrandt's bawdier prints. The graphic complexity and the love of patterning are similar; so is the obsession with genitalia.

Other works in the show variously called to mind the scratchy, intuitive mark-making of Twombly (although with little of that artist's poignant touch), the obsessive patterning of various outsider artists, and the clunky, dumb cartoon imagery of Philip Guston.

When, later in the show, Dunham alights upon his cleaner graphic style, I find myself intrigued by his intentions but less excited by the imagery. Many of these later works are variations on a settled motif: a man in a hat with a phallic nose, big lips, two rows of teeth, and neither eyes nor ears. This figure - and several equally repulsive creations - are treated in photoengravings, linocuts, lithographs, monotypes, etchings, and wood engravings.

Dunham repeats the tropes relentlessly, suggesting to me a deliberate dissociation of content and medium. The imagery's potential to shock is snuffed out by Dunham's obsessive exploration of technique, and as a result, some of the intensity of the earlier prints is forfeited.

But there remains something compelling about the dynamism, the rhythm, and yes, even the glamour that Dunham bestows upon his crass, ridiculously abject subjects.

Some of these series have something musical about them - none more so than the five etchings known collectively as "Closing In" (2003-2004), which toy with negative and positive space using bold, simplified lines.

On occasion, Dunham sets out to challenge good taste not only in his imagery but in the medium itself. One series of phallic-nosed figures is printed as a wood engraving with embossing that pulls the outlines up from the surface. Everything about these works - the colors, the embossing, the dumb graphic simplicity of the style - is tacky, and I've no doubt Dunham wants it that way. It's kitsch, but knowing kitsch. And as such, it's hard not to like.

See this show if you possibly can. The Addison closes on July 13 to embark on an ambitious building and renovation project: It may be a while before you get the chance to visit again.