THIS STORY HAS BEEN FORMATTED FOR EASY PRINTING
Visual Arts

A painter working behind the lines 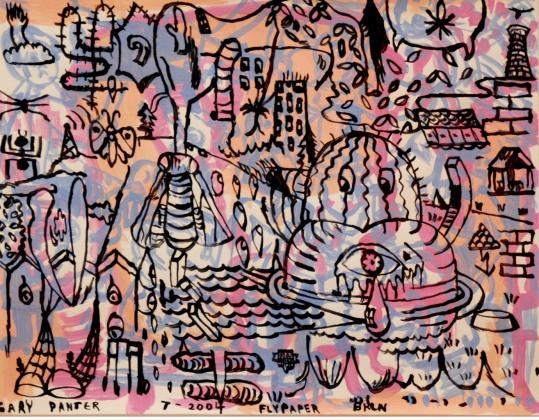 In works such as "Flypaper, 2004," Gary Panter uses a limited palette and his outlines don't line up with his colors. (&#169;smneedham)
Email|Print|Single Page| Text size – + By Greg Cook Globe Correspondent / May 4, 2008

RIDGEFIELD, Conn. - In the 1980s, Gary Panter was an Emmy-winning designer of fabulous sets for "Pee-wee's Playhouse." His illustrations have appeared in Time, Rolling Stone, Entertainment Weekly, and The New Yorker. One of the most important cartoonists to emerge in the late 1970s and '80s, his work was featured in the "Masters of American Comics" exhibition that opened at Los Angeles's Hammer Museum and Museum of Contemporary Art in 2005.

All this time he has painted, too, but somehow, while operating in plain sight, the 57-year-old has been one of those artists who float under the art world's radar.

"Daydream Trap," at the Aldrich Contemporary Art Museum, rectifies this a bit. The inspiration for the exhibit is a terrific, comprehensive two-volume catalog of Panter's work that PictureBox published last month. The exhibit, organized by Aldrich exhibitions director Richard Klein, is a more modest, two-room affair.

The main gallery presents 17 paintings and 19 comics pages made since 1996. Panter's paintings are populated by cartoony B-movie he-men, busty gals with guitars or guns, cute critters, monsters, and robots wandering through rotting industrial landscapes, treacherous jungles, or stripped-down abstract backgrounds that might be read as caricatures of the plains of Panter's Texas youth.

Panter's style draws on bits of Dick Tracy, Jack Kirby's Marvel superheroes, psychedelic rock posters, Japanese monster movies, and Cubism. There's something Whitmanesque in his ravenous cataloging of our collective pop unconscious. Gender roles, sexuality, violence, heroism, failure, hopes, and fears get reflected back to us in a funhouse mirror. Still, as Pee-wee might say, the secret word is fun.

"I thought the next generation of Pop artists would put things into the media and then pull them back out of the media," Panter said during a recent interview at his Brooklyn home. "And then it would be a warmer kind of Pop Art. In some way it's about images running through systems."

Panter imitates the look of cheap off-register print jobs and hand-painted Mexican street advertising with his repeated motifs, limited palette of bright acrylic colors, and outlines that don't quite line up with the colors underneath. In an era striving for perfection through technology, he embraces the flaws that in many ways define our humanity.

His drawing is deliciously crude, like something scrawled in the margins of a high schooler's notebook or the gloriously messy low-fi buzz of punk rock. In "Helioport" (2002), this becomes an almost completely abstract tangle of thorny red lines scratched out atop a pink and white background. Some works feature busy and seemingly unrelated line drawings layered one atop the other. His lines never flow; he builds up lots of short, jagged strokes that crackle like cartoon lightning. It's the opposite of Japanese art star Takashi Murakami's sleek, airless cartoon creations. Panter's work is raw, sweaty, unleashed, maybe unhinged.

But when Panter stumbles, we get random jumbles of cheesy characters in acid colors. Ink drawings from "Jimbo in Purgatory" (1997-2001), his ambitious comic-book reimagining of Dante's 14th century "Purgatorio," show Panter's trademark lunkhead Everyman, Jimbo, wandering a Purgatory populated by Frank Zappa, Boy George, Bruce Lee, Elvis, Alice Cooper, and Tiny Tim. The comics panels are carefully arranged into whole-page designs with elaborate decorative borders. But the intricate orchestration winds up feeling wooden. And Panter's text is so dense with allusions that it seems indecipherable.

A second gallery offers a recording of Panter's meandering indie music, a polyhedron-shaped rod sculpture dangling from the ceiling, a mini psychedelic light show, and a case of sketchbooks (including haunting drawings of the World Trade Center towers falling on Sept. 11 that Panter drew from direct observation), publications, and ephemera. Panter covered the black gallery walls with cartoon doodles in chalk that glow under black lights.

Panter took seriously the notion that anything could be art, put forward by Marcel Duchamp, who infamously (and humorously) declared a urinal to be a sculpture - just because he said so - in 1917. "Duchamp set me free," Panter says in the catalog, "and now I'm running through the streets."

Panter grows increasingly influential himself - a forerunner of Providence's psychedelic punk Fort Thunder gang, West Coast "Lowbrow," and "Pop Surrealist" artists who turn up in Juxtapoz magazine, and the obsessive patterns of hearts, stars, and diamonds of what might be called Lucky Charms art.

But in art-world practice, that Duchampian idea has been translated as the view that what's found on the streets isn't art until an artist or curator brings it into a gallery. For too long that has left artists like Panter, who act in the gap between art and pop culture, out in the cold.