Banksy has risen from hip outsider to gallery star 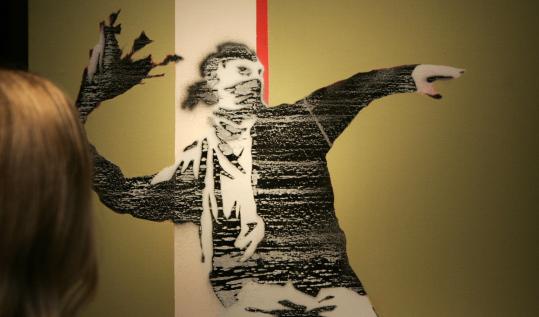 LONDON - At a white-walled gallery in one of London's priciest quarters, a small army of stenciled rats and smiley faced storm troopers is awaiting an invasion.

The chic Andipa Gallery is expecting a stampede of art buyers to its latest exhibition of works by Banksy, the pseudonymous "guerrilla artist" whose satirical images have gone from street-corner graffiti to coveted artworks that sell for hundreds of thousands of dollars.

Gallery owner Acoris Andipa says Banksy's rise from hip outsider to art-world star has been rapid, as he discovered when he held a preview in the exclusive Swiss resort of Gstaad.

Such prices are no longer exceptional. Last year, a Banksy went for almost $600,000 at a London auction. Earlier this month, "Keep It Spotless" - a Banksy stencil over a polka-dot painting by British artist Damien Hirst - sold for $1.8 million in New York.

The 60 works in the Andipa show range from $15,000 for limited-edition prints to $900,000 for a painting of sharks circling supermarket trolleys full of bright orange fish.

Banksy's opinion of all this can only be guessed. Andipa does not know or represent him. The works in the show - on wood, canvas, fragments of wall, and pieces of metal - were bought from collectors around the world.

Banksy's website says the artist does not endorse gallery shows of his work and disapproves of auction houses selling his street art because "it's undemocratic, it glorifies greed, and I never see any of the money."

His publicist, Jo Brooks, said the artist had no connection with the Andipa show.

"It's absolutely nothing to do with him, and there is no comment," she said.

It's a classic Banksy contradiction that he is famously publicity shy, but also employs a publicist. He's an expert at blending an outsider image with commercial savvy. He almost never gives interviews, avoids being photographed, and has not even confirmed his real name.

Most agree his name is Robert - or possibly Robin - Banks, he is in his early 30s, and he comes from Bristol in southwest England, where he began his graffiti career in the 1980s and 1990s.

Using spray paint and cardboard stencils to tag walls, bridges, and street signs, Banksy evolved a cheekily subversive style. His most famous images include two police officers kissing, armed riot police with yellow smiley faces, and a chimpanzee with a sign bearing the words, "Laugh now, but one day I'll be in charge."

In various corners of London, he stenciled rats holding placards saying, "You Lose" and "Get out while you can."

Several of the rats are in the new show, as are Vladimir Lenin on roller skates, a masked rioter preparing to hurl a bouquet of flowers, a military helicopter topped with a jaunty pink bow, and a group of well-heeled lawn bowlers tossing bombs.

Andipa said that Banksy has a knack for "boiling satirical points down to a simple, single image."

"Everybody gets it. It's so accessible," he said.

That accessibility does not impress everyone. Art critic Matthew Collings wrote recently in The Times newspaper that Banksy's ideas "only have the value of a joke."

Owning his work "would make you modern and clever - or stupid. It's a fine line."

Banksy's reputation has been boosted by a series of attention-grabbing art pranks.

In 2005, he hung an image of a spear-toting ancient human pushing a shopping cart in the British Museum. The next year he smuggled a life-size figure of a Guantanamo Bay detainee into Disneyland.

For a 2006 exhibition in Los Angeles, he spray painted an elephant red and gold and placed it in a living room with matching wallpaper. People lined up around the block outside the warehouse where the show was held. Brad Pitt and Angelina Jolie were among those who bought work.

As his fame and reputation grow, it's becoming increasingly hard to see Banksy's work in its original setting - the streets. At first, the main threat was local authorities removing it. In recent years, building owners have sold entire walls, or covered up Banksy stencils to preserve them.

Lately someone has been painting over Banksy works in London, leaving the stenciled words "all the best" beside them. Some say the vandal is a rival street artist. Others say it is Banksy himself. We may never know.