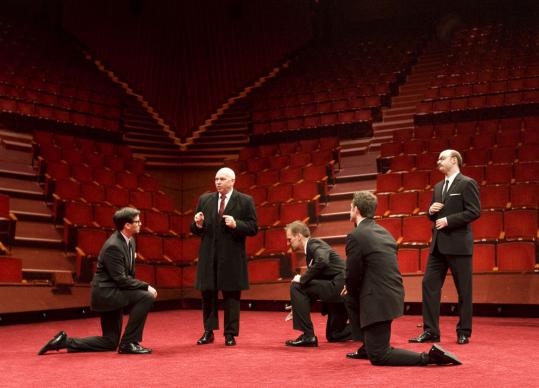 Sometimes that doesn't much matter, because the atmosphere this young French director creates is so hypnotically seductive that we find ourselves drawn into his dream of Caesar instead of wondering what happened to Will's. Nauzyciel's approach, which bears the strong imprint of his training in visual arts and film as well as theater, verges on the operatic - not so much because of the ways it uses music, but because, like many modern interpretations of classic operas, it is more concerned with the director's vision than with the composer's or, still less, the librettist's.

But of course Shakespeare is far more than a librettist, and so this emphasis on the mise-en-scene over language and character comes at a price. While Nauzyciel's "Caesar" is rarely dull to look at, and while its JFK-era setting is clearly trying to make some comment on current American politics, it is too often tiresome to sit through and unclear about whatever political point it is trying to make.

Riccardo Hernandez's set, dominated by a photographically precise rendering of the empty ART seats on the back wall, wittily provokes us to consider just who's acting and who's watching here. It also evolves in bold and striking ways to support Nauzyciel's conception of the play, which has its characters acting out their stories in some kind of dreamworld or, possibly, an afterlife.

The problem is that the same care has not been lavished on bringing meaning to every line and depth to every characterization. Effortlessly hip '60s costumes (skinny ties, Jackie-esque gowns), mid-mod furnishings, and a cleverly metaphorical set design can take you only so far. If the words don't come alive and the actors aren't free to show us why they act as they do, our brains and hearts check out even as our eyes continue to admire.

Some of our detachment, it's true, may be Shakespeare's fault. "Julius Caesar" contains some famous set pieces and classic rhetoric - Cassius's persuasion of the reluctant Brutus, Caesar's assassination in the Capitol, Mark Antony's funeral oration - but as a play it is less fully fleshed out, less undeniably three-dimensional in its portraits of flawed human beings, than the greater works that would follow. Even Brutus (the play's real center, despite its title) never seems as complex or convincing as Hamlet and Lear.

But he does seem like a real person, and a noble one whose very nobility is the seed of his destruction. What fascinates us about Shakespeare's Brutus is that he kills his dearest friend, Caesar - but does it because he truly believes that it is the only virtuous course open to him. It's his tragedy to live long enough to see how little good his crime actually does.

Nauzyciel's Brutus, in contrast, is a very different, if familiar, type: a smooth-talking politician who says he's acting only out of a desire for his country's good, but who's really just in it for his own selfish ends. Jim True-Frost does a decent job of getting this portrayal across, just as the rest of the cast generally hits the marks Nauzyciel sets for them. (James Waterston's Mark Antony, though, is almost shockingly soft-spoken; could this guy really have inspired a nation to mutiny?) But to distort Brutus so fundamentally inevitably distorts the whole arc and tenor of the play.

The director has also imposed a potentially fruitful image that never fully pays off, by conceiving all the action as if it were seen through the eyes of a minor character, Brutus's young slave Lucius. Perhaps it's all Lucius's dream; perhaps it's really happening while he watches; perhaps everyone, including Lucius, is already dead and reliving these events in some afterworldly theater. All this ambiguity and theatricality makes for some indelible images and pleasantly disturbing feelings of uncertainty, but ultimately it doesn't leave us with a deeper or more coherent vision of Shakespeare's play.

Nauzyciel has attempted to deepen Lucius's symbolic value by making him both deaf and silent; the few lines the character speaks have been translated into sign language, and the production also cheats a bit by having him sign when he wouldn't actually be speaking at all. The signing underscores the striking and unusual ways in which the director uses gesture for all his performers, but it's hard to say exactly what we're to make of it all. The way the actors move is often fascinating to watch, even beautiful, but it bears little apparent relation to the words they're speaking or the actions they're supposedly performing.

Some of this disconnection is just mildly distracting, as when Brutus refers to Lucius playing his instrument while the boy does nothing of the kind. (This musical interlude, like many others, is left to a charming but incongruous jazz trio, in this case crooning "Suicide Is Painless," better known as the theme from "M*A*S*H.") But sometimes it's more damaging: The actors often face out at us to deliver speeches that are clearly meant to engage them in intimate, eye-to-eye exchange. Thus when Cassius and Brutus say farewell for what they know may be forever, they don't even look at each other.

Yes, it looks cool. And it says something about all of us playing a part on the world's stage, or something. But it doesn't give any real sense of human relationships or insights unfolding before us; that may be why it's hard even to comment on the individual actors' performances, because whatever they're aiming for is subsumed in the larger conception of the production. Shakespeare had big ideas, too. But he knew we could only really see them if they appeared to us in human form.