Building aims to give law school a sense of place 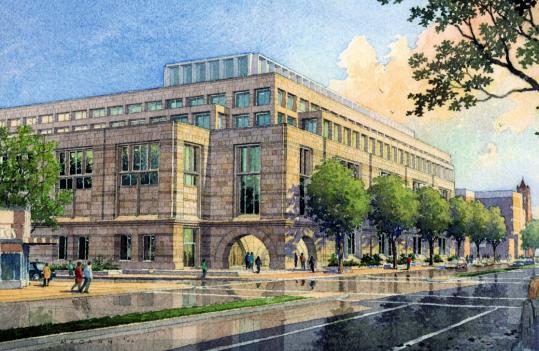 New York architect Robert A.M. Stern's design for a new building at Harvard Law School tries to respond to everything around the structure and create a cohesive campus for the school. (,)
Email|Print| Text size – + By Robert Campbell Globe Correspondent / February 10, 2008

CAMBRIDGE - "There's no there there when you come to Harvard Law School," says the school's dean, Elena Kagan, riffing on Gertrude Stein's famous line about Oakland, Calif. "All the buildings face in different directions."

It's true. Harvard Law School looks like a little village of buildings of different sizes and kinds. Some are quite good, but they all seem to be trying not to look at one another, and they're dwarfed by the bulk of the school's one large building, a pompous pile known as Langdell designed in 1906. There's nothing you could call an outdoor gathering place, like Harvard Yard or Harvard's many other green quads. Outdoor space is a confusion of asphalt roads and paths.

In this situation, a successful new chunk of architecture must do more than accommodate the functions it's being built for. It must also gather itself and its surroundings into a coherent whole, giving the law school what it's never had: a campus with a sense of place and a visual identity.

That's the goal of a new building now under construction on the site of a former parking garage (and a couple of houses that Harvard moved), at the corner of Massachusetts Avenue and Everett Street in Cambridge. The architect is Robert A.M. Stern, a New York practitioner who is also dean of the Yale School of Architecture. It's always hard to judge a building before it's finished, but the "Northwest Corner Building," as it's known until a donor comes forward, looks like a promising success.

Stern is sometimes called "the Ralph Lauren of architecture;" at least he was so named in a recent headline in a New York newspaper. He's long been known for building mansions for the rich in a variety of what you might call "preppie" styles - well-mannered and traditional. Recently he was selected as the architect of the George W. Bush Presidential Library. In our part of the world, though, he's best known for his work at the Harvard Business School.

Stern in the past has offered a standard rap on Harvard. He says Harvard began with the buildings of the Yard, 18th-century structures in the Georgian or Colonial style (those are synonymous terms), handsome but simple, usually red brick, often with white or pale trim, sometimes with a cupola. He says that's Harvard's brand image. He argues Harvard wisely continued the Georgian brand in the river dorms - the so-called "houses" - and in the original Business School of the 1920s, but then foolishly departed from it in the modernist buildings, often made of concrete, of more recent decades.

In the two large projects he's done for the Harvard Business School, the Spangler Center and Baker Library, both neo-Georgian, Stern considers that he's restored Harvard's proper and memorable brand.

But at the Law School, "We don't have a brand," announces Dean Kagan. She points out the wide disparity of styles in the school, from the very first building, Austin Hall of 1884, by the great architect H. H. Richardson, up through modernist works, including several by Walter Gropius and by his onetime partner, Benjamin Thompson, the creator of Boston's Faneuil Hall Marketplace.

It's nice to report that Stern doesn't do a Georgian building, thus adding one more ingredient to this mixed salad of styles. Nor has he done anything flashily contemporary. He's done the kind of building that we don't see enough of in this age of so-called "starchitects." It's a background building, not an architectural adventurer strutting on a stage. It's a building that's devoted not to impressing you, but rather to housing a very diverse set of interior functions and, at the same time, organizing the campus around it.

The functions are many: classrooms, seminar and conference rooms, offices for student publications, large meeting and social spaces, a branch of the Harvard Coop, all kinds of student services, dining and leisure facilities, pro bono clinics, underground parking for 698 cars, and more. At one end, Northwest links up with and more or less absorbs Harkness Commons, the student center designed by Gropius and his firm in 1952.

Northwest Corner, in short, is not a single-function building, it's a mélange of many purposes, and it looks, in fact, rather like three or four buildings that have been plugged into each other. It tries hard to respond to everything around it. Its outer walls are high - five stories -and solid along Mass. Ave., holding the street edge and the corner as they should, but stepping back at the upper floors so as not to overwhelm.

At each end of Northwest, along Mass. Ave., there are prominent entrance doorways. Thus for the first time the Law School will address the public world, from which it has always seemed to be hiding. On its inner edge, by contrast, Northwest wraps three sides of a quiet private plaza, which sits on top of a loading dock, which, in turn, sits atop the underground parking.

The most dramatic move is an endeavor to give the Law School a new central quad. A wing of Pound Hall, one of the Thompson buildings, is being demolished to create some open space. Northwest, where it fronts this future green quad, billows forward in a gentle curve that gives the space a memorable shape and an accent.

And the architectural style? It's an unpretentious vernacular Stern has used before, for example on a courthouse in West Virginia. It's a style sometimes called "stripped classicism," using traditional materials and shapes but without period ornament. The exterior walls are buff Indiana limestone, making a visual rhyme with the cooler limestone walls of Langdell and also with some parts of other older buildings. Those rhymes begin to tie the Law School into a semblance, at least, of unity.

The only examples of look-at-me, self-conscious design are those two entrances on Mass. Ave.: They're cloistered porches with wide archways, as if the designer had once been traumatized by Oxford and Cambridge. The arches, once again, rhyme visually with a Richardsonian motif, used at Austin Hall, but to this observer they look theatrical.

Why do universities keep expanding when they keep telling us they aren't going to add more students? Kagan gives several reasons. One, the desire for smaller, more interactive classrooms, and therefore more of them, instead of the old big lecture halls. Two, the desire for a lower teacher-student ratio and therefore more teachers. Three, the desire to bring scattered functions back into the school, such as student publications and the student pro bono clinic (now in Jamaica Plain). Four, an ever-growing menu of speakers, symposiums, and research projects. Five, the desire to improve the quality of student cultural and social life, in the hope of keeping students hanging around the school at all hours instead of disappearing into their homes.

"We chose Stern," says Kagan, "because we thought his buildings on other campuses brought people together."

In a semi-traditional building like Northwest, a lot depends on the quality of craft and construction. Harvard, as a presumably enduring institution, once built for the ages. Now it sometimes listens too hard to the professional cost-cutters. Whether we'll see a shallow stage-set or a rich, solid, convincing work of architecture is something we won't know until the predicted opening in July 2011.