An entertaining, if not remarkable, take on Puccini's 'Tosca' 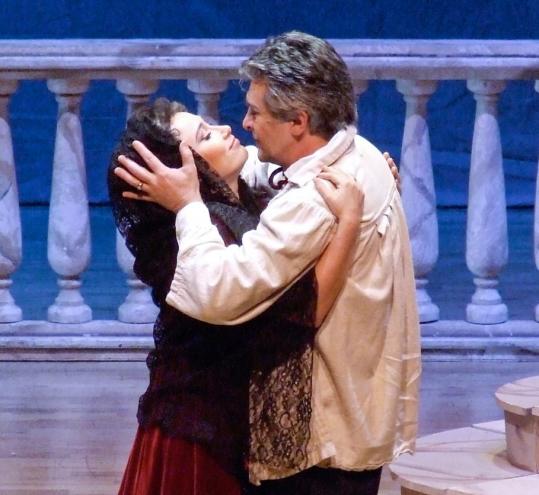 If you've ever wanted to put on an opera without knowing how, "Tosca" would be a good bet. Giacomo Puccini's score is so tightly constructed that simply playing the notes generates considerable drama on its own - which complicates judging Sunday's rendition by Teatro Lirico d'Europa. The touring company has developed a Boston following for its no-nonsense approach to the standard operatic repertoire, and founder and artistic director Giorgio Lalov didn't deviate from that pattern. The results were uneven, yet still made a viable afternoon's entertainment.

"Tosca" bewitches because it works on two levels. Beneath the almost archetypal operatic surface - jealousy, betrayal, murder, suicide - the piece is also about opera itself, with theatrical pretense an integral element. At some point, each of the three main characters - the diva Floria Tosca, her lover, the painter Cavaradossi, and the sadistic police chief Scarpia - is trying to deceive the others, whether out of concern, malice, or bravado.

So it was curious that Lalov's direction focused almost entirely on logistics rather than acting. The staging was entirely traditional; this was a production devoted not to plumbing the characters' depths for novel psychological insight, but to seeing a familiar plot unfold in a familiar way. The singers seemed, in large part, left to their own dramatic devices.

It was most noticeable in Olga Chernisheva's Tosca. The soprano's voice was all power and glinting steel; while a connected, legato line wasn't much in evidence, her high notes, particularly in the frenzy of her Act II confrontation with Scarpia, were often thrilling. But she had little sense of the fluidity of Puccini's phrasing, and her stage presence was tentative and awkward. Gestures and movement came a split-second late, oddly out of sync with the music and the drama: the physical version of a poorly dubbed film.

Tenor Orlin Goranov fared better as Cavaradossi. If his high notes were muscularly effortful, elsewhere in his range, he poured out a lovely clarion tone, idiomatic and emotionally charged. His acting was simple but effective, relying on a comfortable stage presence.

Baritone William Powers, as Scarpia, showed the most thespian skill, conjuring his bigger-than-life antagonist with wily resourcefulness. With the exception of his climactic Act I "Te Deum," which went beyond monster to caricature, Powers's extroverted performance was melodramatic fun; he often seemed to play the dictatorial director, sowing discord, then standing back and watching the havoc unfold, infectiously pleased with his handiwork.

Among secondary roles, Giorgio Dinev made the most of Scarpia's henchman Spoletta, utilizing a bright tenor and a deft physical characterization. Conductor Krassmir Topolov led a solid reading (albeit one marred by some erratic, microtonal strings); his beat started off somewhat square in each act, but eventually loosened into the flexibility characteristic of Puccini.

One could easily imagine such a production - the unsurprising staging, the inconsistent but sometimes fine singing, the bargain-basement sets - taking place in a regional Italian opera house during Puccini's time. If the work succeeded there, is it any wonder it remains in the repertoire? "Tosca" might be as close as opera gets to a sure thing.