He captured a city in black and white 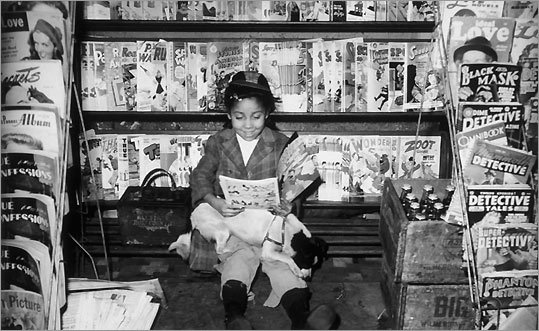 During the many years between the rise of Jim Crow and the dwindling away of the civil rights movement, the "race man" was a sustaining concept in the African-American community. The race man was an individual of great personal accomplishment who was aware of himself as both explicitly representative of his fellow African-Americans and implicitly subversive of white American racism. Duke Ellington and Jackie Robinson may be the two most famous examples.

Charles "Teenie" Harris, who photographed them both, was a race man, too. Forty of Harris's images are on display in an absorbing show at Gallery Kayafas, in the South End. It runs through Dec. 29.

Over the course of a very long career, Harris took some 80,000 photographs - most of them while working for The Pittsburgh Courier. That it was the Courier Harris worked for is significant. For many years, the newspaper had the largest circulation of any black publication in the United States.

That may sound surprising. One thinks of Harlem and the South Side of Chicago as the capitals of African-American culture. But Pittsburgh's black ghetto, the Hill (most notably recorded in the plays of August Wilson and the novelist John Edgar Wideman's "Homewood" trilogy), was a thriving community. How thriving? Earl Hines, Roy Eldridge, Billy Strayhorn, and Art Blakey all hailed from Pittsburgh.

So Harris was in an ideal position for a photojournalist: a varied and richly interesting community to document and a large audience to follow his work. Visiting celebrities welcomed Harris's attention - and the space it would bring in the Courier. Included in the Kayafas show are pictures of Robinson, Joe Louis, Louis Armstrong, and a young Charlie Parker (performing with an equally young Dizzy Gillespie and nearly as young Billy Eckstine).

There's also a photograph of John F. Kennedy delivering an outdoor speech. The Courier's circulation ensured that Harris's subjects were not restricted by any color line. It was, in fact, Pittsburgh Mayor David L. Lawrence who gave Harris his nickname, "One Shot," a tribute to the photographer's knack for quick composition and unwillingness to waste film.

The keenness of Harris's eye is very much evident here. He had a fondness for tableaux: centering his subjects, showing them frontally, even when they're not consciously posed - as in "The School Patrol Guard" or "Little Girl and Her Dog in Newstand." That's true even when his subject isn't a person, like "The Roosevelt Theatre in the Pittsburgh Hill District."

Of course, the sum of person and place is community, and community was Harris's abiding concern. There's a sense of shared life in all these pictures - a sharing among the people in them, a sharing between those people and the photographer. So often Harris's subjects look at the camera, as well they might. These are proud, forthright individuals: not in-your-face, but not about to look down or away either.

Harris's subjects look right back at him even in situations where he clearly hadn't intended it (you can see how often One Shot had to shoot on the fly). Those looks presumably sprang from a feeling of alliance, even complicity, between artist and subject. In the magnificent "Four Elderly Women on a Swing at Lemington Home," Harris shoots the sitters diagonally. Yet the last woman on the right has shifted around to face the lens. She knew she had nothing to hide - just as Harris knew he had much to show.

Harris was sociologist as well as artist. So many of these pictures involve church, workplace, or leisure: people going about their daily lives, and those lives lived together. More than that, Harris's pictures convey an awareness of something being at stake. However indirectly, a statement is being made about the value of these people. Sometimes the statement is anything but indirect, as in a pair of protest photographs from the 1960s. But as with any gifted artist, neither direction nor indirection matters so much as execution. Ultimately, Harris's pictures aren't about life in black America in a particular time and place, or even life in America in that time and place. They're about life. Race man that he was, Harris had a noble agenda. He was too good an artist to be limited by it.

Mark Feeney can be reached at mfeeney @globe.com.