Weems explores issues from both sides of camera 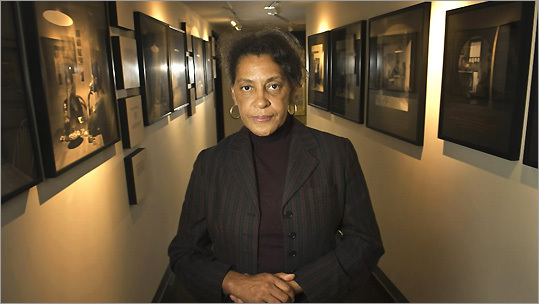 Securing an interview with the photographer Carrie Mae Weems is no easy feat.

Weems agrees to talk a few hours before a Monday evening lecture at Harvard's Arthur M. Sackler Museum. But on that day, this reporter receives a call that the flight from her Syracuse, N.Y., home has been delayed.

She nixes the possibility of meeting the next morning because she has to go to Philadelphia, where she's advising the University of Pennsylvania on revamping its photography department and teaching a graduate course on Wednesdays. Instead Weems carves out some time after her appearance at the Sackler Museum, during a reception in her honor at Harvard University's W.E.B. Du Bois Institute for African and African American Research. The Institute is hosting a mini-retrospective of her work, "All About Eve: Women, Sex, and Desire," ranging from one of her earliest acclaimed pieces, 1990's "Kitchen Table" series, to her most recent video work, 2006's "Italian Dreams," through Jan. 3.

With the low murmur of the reception attendees seeping into the room and fans glancing longingly at her through the glass walls of professor Henry Louis Gates Jr.'s fishbowl of an office, Weems, 54, sits down to answer questions about her work and life. A tall woman, she holds her body in a regal way that suggests her past as a dancer. As she speaks, she tends to repeat phrases melodically in her lilting voice.

Weems is known for large black-and-white prints featuring images of her or unidentified black people culled from history or the present, which explore gender, race, and class inequities. Solo exhibitions of her work appear regularly at galleries, university and college museums, and major museums such as the Museum of Modern Art and the Whitney Museum of American Art. In 1997, she and Robert Colescott became the first African-American artists to appear at the Venice Biennale. Two years ago, Weems received the prestigious Rome Prize, a fellowship at the American Academy in Rome.

"She is part of a group of artists who are really re-looking at racism, and not sort of obvious racism, but at the way that racism has sort of been systemic in our society," says Patricia Hills, an art history professor at Boston University, who included Weems in her textbook "Modern Art in the USA" and teaches about Weems in her courses. "What Weems is doing is asking the question, 'Who gets to speak for the subjects?' Before it's been white photographers doing photographs for white people to look at. And she is just looking at those photographs, redoing them with her own voice, and one is always very aware that Carrie Mae Weems is a black woman photographer."

The "All About Eve" exhibition originally appeared at the University of Rochester earlier this year. How did Weems come up with the name for the show? Weems begins to explain that it was inspired in part by the Bette Davis film of the same name, but she becomes distracted by a male acquaintance calling out to her and holding up a photo to the glass wall of them posing together. Shouting through the divider, he asks for her phone number.

"He doesn't call," Weems says as she goes to Gates's desk to find a piece of paper to write the information down. When she opens the door to hand it to him, he tells her he loves her. He's one of at least two men, including Gates, who express affection for the artist during her visit.

Weems doesn't take it seriously. She's married to Jeff Hoone, executive director of Syracuse University's Coalition of Museums and Art Centers. But she understands their ardor. "I remind them of their sisters, their mothers, their cousins, their ex-girlfriends," says Weems. "Everything but what they're looking for," she adds, then laughs heartily.

Weems's "Kitchen Table" series shows Weems's interaction with not only a man, but a child and other women. Through various poses, she shows how complicated these relationships are. With "All About Eve," she wanted to show how women are depicted in the arts "as evil, as temptresses, as sources of desire," says Weems. "The thing that I'm more interested in is, you know, how to use the black female body to do that."

She gives a list of reasons as to why she uses herself as the subject of her work: She's often the sole black woman in the places where she's lived, she knows how to work with the camera, she's sensitive to how bodies look on film, and she doesn't want to work on someone else's time schedule. But she acknowledges that those explanations are merely excuses.

"Essentially I'm interested in the act of performing, the act of using this body," says Weems. "And it's a good body to work with, a good structure to work with. I really like the structure of my body. It moves well, it looks good, it photographs well, it understands gesture and nuance."

Weems left her Portland, Ore., home at the age of 16 to live in San Francisco, where she acquired those skills by working as a modern dancer. She received her first camera in 1971, at the age of 18. But it wasn't until 1978 that Weems began creating her first documentary photo series, "Family Pictures and Stories," which became her MFA thesis exhibition at the University of California, San Diego.

Her work sometimes elicits interesting responses. A sprawling 1999 Art in America article described her as "radical." Weems seems amused, then mildly annoyed by the classification.

At this point the assistant director of the Institute comes in to ask if Weems needs anything. Perhaps irked by the previous question or merely eager to join Gates and his guests at a nearby restaurant, Weems says, "No. I think we're about finished." But before she ends the interview, she goes back to the subject at least subconsciously while answering another question. Yes, she tackles specific issues, but her work is universal.

"It's a problem of a country," says Weems, "not a problem of one specific ethnic group within a country. So if we talk about what makes a better place to live, then we have to grapple with these issues that affect us all."