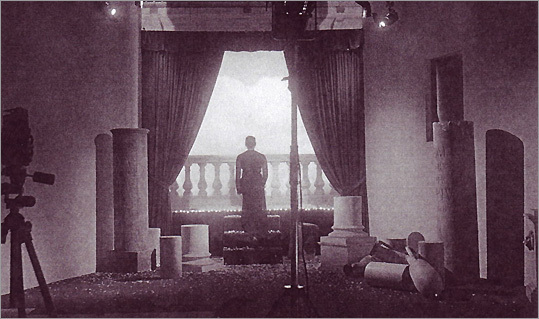 Carrie Mae Weems takes center stage as the subject of her work in photographs such as the 1990 "Kitchen Table" series and the more recent "Roaming" series (above). (Courtesy of W.E.B. Du Bois Institute for African and African American Research)
Email|Print| Text size – + By Cate McQuaid Globe Correspondent / December 7, 2007

CAMBRIDGE - What happens when the nude - the female artist's model, perhaps intended by the artist to prompt or sate the viewer's desire - collides with the portrait? When you pour into that objectified space a subject: a real woman, prickly and tart and loving, gutsy but often uncertain?

There you find the work of Carrie Mae Weems, especially that represented in the small retrospective "Carrie Mae Weems: All About Eve: Women, Sex, and Desire," up at the W.E.B. Du Bois Institute for African and African American Research. It's a collision of yearning and practicality, sweet romance and its jagged underbelly. Much of Weems's work is politically charged; this particular grouping tackles femininity and power.

Sometimes she can be too pointed, even didactic, if witty. As viewers, we prefer to be led, not pushed. As her work matures, Weems gets better at leaving room for nuance, and for the viewer to have his or her own response.

The exhibit, which originated at the University of Rochester, traces the feminist thread in the artist's work from the 1990 "Kitchen Table" photo series to her 2006 film "Italian Dreams." In most of the pieces, Weems takes center stage, playing the lover, the model, the provocateur. Always the storyteller, Weems weaves rich, layered narratives in which characters sway between need and autonomy.

She's at the center of the "Kitchen Table" series, all shot in black and white. People gather around a table in the funnel of light beneath an overhead lamp; the setting recalls an interrogation room as much as it does a kitchen. Like many of Weems's pieces, this one features both images and accompanying text, like Duane Michals's photos, only grittier. The form forecasts her move into filmmaking.

Here we have the arc of a relationship: "He felt her demands for more than he could presently give would cause her to lose a good thing." In the photos, the couple smooch; they play cards. They have a daughter, who mimics her mother as she applies lipstick. Throughout, Weems grapples with desire; it magnetizes the relationship until the woman's need for independence pulls her in a different direction. This is no fairy tale, but the way Weems lays her story out, we knew the outcome from the beginning.

Two other photo series directly confront the problem of the model and the schism between object and subject. "Framed by Modernism" (1999) has Weems in a corner, nude, watching the artist Robert Colescott puzzle beside his canvas. The model observes the painter, and so takes back some power.

In "Not Manet's Type" (1997), she brings the nude model (who is also Weems, the artist) into confrontation with herself, alone in a bedroom, fretting before a mirror. "It was clear I was not Manet's type. Picasso - who had a way with women - only used me & Duchamp never even considered me," reads the caption of one image. "But it could have been worse. Imagine my fate had de Kooning gotten hold of me," reads another. The incisive, often howlingly funny text lets the nude model talk back to some of her appropriators. The images, though, are not as strong - they're mere accompaniment to her text's argument.

Despite their cleverness, these works are too calculated; Weems knows just how her punch lines will hit. In lush, large-scale photos from the "Roaming" series and in the concurrent "Italian Dreams," she leaves text behind. The photos rivet as they follow Weems's lone, dark figure as she wanders through Italian landscapes and architecture. In the video, she layers images into a dreamy, wordless montage. Meaning creeps in, but doesn't hit you in the face. "Italian Dreams" was shot at the Cinecittà in Rome, where Fellini shot most of his films.

We follow Weems as she walks regally through the studio in a long black dress, into the dreams and visions of others. The camera cuts among several motifs: a girl kneeling beneath a window filled with stars; clips of women from old films, intercut with mirror images in which Weems plays them; and various scenarios of desire, power, and submission between black women and white men. In one, the woman holds a mirror up to the man's face. In another, the man points a flashlight at the woman's crotch. It's a seductive, occasionally alarming brew; just as starry skies and swishing skirts begin to lull you, something outrageous occurs.

But unlike in "Kitchen Table," we don't know the ending; indeed, the narrative "Italian Dreams" seems to spiral in on itself, never-ending. It's the work of an accomplished artist who both acknowledges and subverts the power of sexual objectification.

Carrie Mae Weems: All About Eve: Women, Sex, and Desire