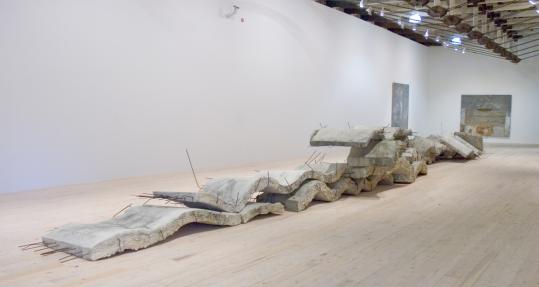 NORTH ADAMS - To be in the presence of Anselm Kiefer's mammoth sculpture, "Etroits sont les Vaisseaux (Narrow Are the Vessels)" is both sobering and healing. Like a hushed cathedral, the sculpture can humble a visitor with its size and form. The piece is a stuttering undulation of concrete and rebar, part ravaged city and part graceful ocean wave. It embodies something ineffable and perhaps holy. Unlike a cathedral, it is as ugly and seemingly broken as it is grand.

The 80-foot, six-ton behemoth comes to Mass MoCA courtesy of Connecticut collectors Christine and Andrew Hall, who in September were enjoined by a Connecticut court to remove the sculpture from their property after the Fairfield Historic District Commission challenged the couple for not obtaining a certificate of appropriateness for the piece. It's ironic that a work of art that sharply addresses issues of life, death, and the destruction we humans wreak upon ourselves and our world should fall victim to quibbling about what's appropriate.

The viewing public lucked out, though. The Halls have loaned the piece to Mass MoCA, along with several of Kiefer's paintings, which add up to an exhibition that's brief and bracing. It's a small show, but it effectively conveys the artist's ambitious and cauterizing vision.

Kiefer was born in 1945 in southern Germany, as the Third Reich was falling. His art has fearlessly delved into recent history, brooding on the savagery of war. He paints landscapes of epic conflict; he mixes straw, lead, and dirt into his paint to make grounds that look like gunmetal or scorched earth.

The earlier paintings here date back 20 years. "A.E.I.O.U. (Elizabeth of Austria)" (1987) sports a scabrous, rusty ground of lead that looks almost topographical - wrinkled, pitted, discolored, stomped on. A toy-size naval boat might represent Elizabeth's steamer Miromar, although Elizabeth ruled in the 19th century and the boat is distinctly from the 1930s or 1940s. The vowels scrawled above it refer to an acronym apparently coined by 15th-century ruler Frederick III of Austria, perhaps for the Latin "Austria est imperare orbi universo" or "Austria's destiny is to rule the world." Kiefer conflates eras, suggesting that history repeats itself, and that power always loses its sheen.

Four more recent paintings, from 2005-06, are giant landscapes, up to 25 feet long by 10 feet high. In each of these thickly impastoed works, the horizon line crosses near the top, and the land unfurls toward us in dramatic, fanning furrows.

"Die Nachricht Vom Fall Trojas (News of the Fall of Troy)" features several styles of facture: in places, it's so light you can see the weave of the canvas; elsewhere, it's cracked like parched earth, and in some spots it looks like charred wood. The scope of the image, and the sense of aftermath, makes it stilling to view, but the mark-making is violently active, the paint thrashed onto the canvas or dug off of it. And then, here and there, a dollop of color pokes like a wildflower through the muck, a whisper of redemption.

Those shimmers of color grow stronger in the other three new canvases, which stand in a gallery with a sculpture by Kiefer's teacher, Joseph Beuys. The two have much in common: each invokes the power of symbols; each grapples with survival; each roots himself in the elemental.

Beuys's "Blitzschlag mit Lichtschein auf Hirsch (Lightning With Stag in its Glare)" has at its center a bolt of lightning so dark, turgid, and forboding you might mistake it for a tornado. A cart represents a goat; an aluminum-plated plank is the stag. A dark box on a tripod signifies the first established location of the north magnetic pole. Little turd-shape sculptures representing primordial animals squirm along the floor. The scene narrates a creation myth, and as hopeful as that sounds, it's daunting and filled with violence.

So it goes with Kiefer, who starts with the violence and then begins to imagine, through his own act of creation, some kind of salvation.

Which returns us to "Etroits sont les Vaisseaux" (2002). The title comes from a text by French Nobel laureate and diplomat Saint-Jean Perse (whose given name was Alexis Léger): "In vain the surrounding land traces for us its narrow confines. One same wave throughout the world, one same wave since Troy rolls its haunch toward us."

Sounds like Yeats' "rough beast, its hour come round at last/ Slouching towards Bethlehem to be born," and the rhythmic undulation, the rising, falling and crumbling of Kiefer's massive sculpture, has a life-giving force to it. What exactly will be born, and whether it is beautiful, horrible, or both, remains to be seen.

Anselm Kiefer: Sculpture and Paintings from the Hall Collection