THIS STORY HAS BEEN FORMATTED FOR EASY PRINTING
Comedy Notes

A dean of stand-up carries on

If some angel of comedy were to take Robert Klein through his own version of "It's A Wonderful Life," he might see a world with no HBO stand-up comedy specials and a place where observational comics like Jerry Seinfeld, Ray Romano, and Jay Leno all struggle to find a role model. It's fair to say that stand-up comedy wouldn't be the same without him.

Klein, who plays the Comedy Connection tonight and tomorrow, balks at such grand pronouncements about his impact. But he always knew he was perhaps asking more of himself than other comics, admiring the way Lenny Bruce made social points in his work and Jonathan Winters made it a more theatrical experience. Klein, who studied drama at Yale and was part of the groundbreaking Second City improv troupe, brought a keen intellect and an actor's sense of stage presence.

"When I first did 'The Tonight Show' in January of '68, they thought what I was doing was so different that they decided to protect me and have me sit in the panel first," Klein says from a hotel in San Diego. "The audience gets to know me for a minute and a half or so or two minutes, and then [I] get up and do my stand-up. Which was amazing."

On an April HBO special honoring Jerry Seinfeld, which Klein attended, Seinfeld cited Lenny Bruce for making comedy personal but said Klein took it a step further. "He made it warmer and more accessible," said Seinfeld. "And there was the whole New York thing, and to me, Robert made it OK to be smart and be a comedian. You could just be as smart as you can be and that will work for you. I had never seen that before."

Klein was already a popular comic in 1975 when "An Evening With Robert Klein" aired on HBO. It was the first hourlong stand-up comedy special the fledgling network had ever aired, and it helped establish their "On Location" franchise. Klein has had an incredible run on HBO - his eight specials span 30 years and are gathered on the new boxed set "Robert Klein: The HBO Specials 1975-2005."

In Boston, he'll be working on material for his ninth special, which will air in late 2008 or early 2009. "Each time I wonder if I can do it and then there it is," he says. "The old machinery is working OK."

Nancy Geller, senior vice president of original programming at HBO, credits Klein with opening the door for some 90 comedians who have had specials on the network over the past 32 years.

"When you talk to comedians, they will tell you that Robert Klein is the master," she says. "Robert and [George] Carlin are right in the first sentence when you think of 'the guy.' "

If the general public does not acknowledge Klein's legacy as readily as, say, Carlin's, the boxed set is a reminder of the breadth and quality of his work. Many of the specials have never been available, and Klein admits he hasn't been a very good self-promoter. Klein himself hadn't seen much of this footage until he was preparing the set but found it still stood up.

"When I look over my old work, I'm very proud of it," he says. "I can see that elements of it were primitive. Interesting now, at this age, I'm better at stand-up comedy than I ever have been in my entire life."

Dane Cook brings his "Rough Around the Edges Tour" to the TD Banknorth Garden tomorrow for two shows. . . . Don Gavin headlines a show with Larry Lee Lewis, Jessica Casciano at the Hyde Park VFW tomorrow. . . . Artie Lange & Friends will play two shows, 7 and 9:15 p.m., on Sunday at the Comedy Connection. . . . "The Rosenbach Company: A Tragicomedy," a pop musical based on work by cartoonist Ben Katchor, comes to the Jewish Theatre of New England Sunday. 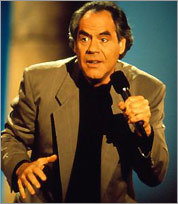