Lumbering 'Frankenstein' is too pumped up 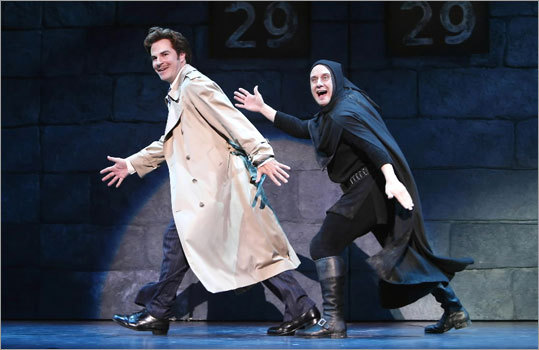 That's Fronk-en-steen to you, as legions of diehard Mel Brooks fans already know. Those fans no doubt also know that Brooks's adaptation of his 1974 film comedy, "Young Frankenstein," opened last night on Broadway. So, really, the only question left to answer is a simple one: Is it alive?

Certainly there's enough electricity in Robin Wagner's monster-size sets and Peter Kaczorowski's blindingly strobe-filled lighting design to power a dozen ordinary musicals - and director Susan Stroman's choreography has plenty of galvanizing moments, too. But there's something lumbering and clunky about this rehash, the tale of a young New York doctor who inherits his grandfather's Transylvanian castle, and the creepy housekeeper, spooky henchman, and sexy lab assistant to go with it. And the clunk starts with its official title: "The New Mel Brooks Musical Young Frankenstein."

Like the Old Mel Brooks Musical, "The Producers," this one takes a few indelibly funny moments from a classic movie comedy and blows them up into gargantuan musical numbers. In "The Producers," we had the bamboozled old-lady investors dancing giddily on their walkers; in "Young Frankenstein" we get Dr. Frankenstein and his monster, familiarly natty in top hat and tails, now surrounded by a whole chorus line of identically dapper hoofers for "Puttin' on the Ritz" - and the housekeeper, Frau Blucher, done up in sparkly black evening gown to join the chorus.

The movie scene had a touching, incongruous, goofy charm; its matter-of-fact weirdness made it both funny and sweet. The no-holds-barred stage expansion, with Shuler Hensley's otherwise charming monster bellowing the lyrics like a third-grade class clown, just feels big and stupid. It dazzles - especially when the stop-action strobe effects kick in - but because it's aimed to impress rather than engage us, it doesn't delight.

And what is Frau Blucher doing there, anyway? What made her hilarious in the movie, particularly in Cloris Leachman's unforgettably high-camp performance, was her utterly straight-faced demeanor. Whether playing the violin or mourning her deceased lover (old Victor Von Frankenstein himself), Leachman's Frau was funny precisely because she never, ever let on that she knew she was ridiculous. So to put Frau Blucher in an evening gown - or, even worse, in some kind of "Cabaret" leather bustier for the parodic torcher "He Vas My Boyfriend" - is to spoil the humor by pointing at it with giant neon arrows.

Of course Mel Brooks is allowed to do whatever he wants with his own jokes. And he and the gang have spared no effort or expense in achieving the effects they're after. Andrea Martin is over-the-top ridiculous as Frau Blucher, just as Roger Bart hams and screeches his way through a kind of supersized Gene Wilder homage as young Dr. Frankenstein. Sutton Foster and Christopher Fitzgerald are fine as lab lovely Inga and hunchback Igor, respectively; they sing loudly and carry a big shtick. But there's no trace of the irreplaceable quirkiness, the offhand oddity, of the movie's Teri Garr and Marty Feldman.

In the same way, Madeline Kahn's original portrayal of the doctor's hysterically frigid fiancee, Elizabeth, here gets pumped up into a whole musical number, "Please Don't Touch Me," complete with a forest of jazz-handing chorus girls highlighting the off-limits body parts. Megan Mullally delivers the Elizabeth that Brooks and his co-writer for the book, Thomas Meehan, apparently want, but unfortunately that's a character that no longer makes sense: She's frigid, but she also, it seems, has sex all the time. So the classic epiphany of her sexual awakening with the monster, in which she bursts into "Ah, Sweet Mystery of Life," loses its snap.

It's also upstaged by the broad, boys'-locker-room humor of the number that immediately follows, "Deep Love." Take every double entendre you can think of - long love, firm love, etc. - and keep, as it were, ramming it home. Then do it again.

No one ever accused Brooks of subtlety. But his comedy was funnier when Hollywood standards made him find ways around using every dirty word he could think of. (Perhaps nicety is the mother of invention.) And "Young Frankenstein," the movie, was funnier than the stage version because it was willing to be weird, to toss off a joke without explaining and underlining it to death.

"Young Frankenstein," the musical, has millions of dollars' worth of pyrotechnics and other special effects with which to light up the stage, and it deploys them with abandon. Unfortunately, though, that doesn't mean that lightning strikes twice.