Taking control with her bodies of work

Carolee Schneemann's film "Fuses" (1964-67) has provoked anger and outcry over the years, with critics calling it pornographic. The 22-minute 16mm film, on view with several of Schneemann's other works at the Pierre Menard Gallery, is a hypnotic, painterly expression of feminine desire: a moving landscape of bodies and unhurried gestures spliced into a montage, with flitting monochromes and scratches animating the film's surface.

If we take "Global Feminisms," an overview of contemporary feminist art at Wellesley College's Davis Museum of Art, as a point of comparison, Schneemann's work still appears daring and original. Unlike many of the artists in "Global Feminisms," she is not defining herself in relation to another (oppressor, lover, child).

In "Fuses," as well as black-and-white photographs from "Eye Body - 36 Transformative Actions" (1963) and the hilarious "Vulva's Morphia" (1993-96) assemblage, in which her character awakens to how she's been defined by others, Schneemann claims her own flesh. It's not the object of another artist's gaze. Nor is it about a woman's body as a site of violence. The work powerfully celebrates Schneemann's experience as a woman who loves and desires men and whose body is a creative source - in lovemaking and in art-making.

There's not enough space in the gallery to hang a retrospective. Instead we get tastes of Schneemann's artistic development, from the early, graceful Expressionist painting "Braided Onions II" (1954) to work of this decade, including "Terminal Velocity," in which she scanned photographs of people plummeting from the Twin Towers on 9/11 and stacked them in columns. She showed "Terminal Velocity" for the first time in December 2001, and at that moment it must have been as shocking as "Fuses" had been when it first screened.

Both are fearless and stripped down, as are many of Schneemann's works; they touch a third rail many people are afraid to approach, a current of loss and want all braided together into something like a life force.

Artist and gallerist Maria Magdalena Campos-Pons has organized "Meconio," a nervy group show at GASP. The title derives from meconium, a substance that accumulates in a mother's bowels during pregnancy and is discharged at birth; in her curator's statement, Campos-Pons calls it "the residual data from the gestation of a new time/life/form."

It's too broad a topic. The works don't relate well to one another. Even so, they're an edgy, strong group.

Colombian artist Liliana Angulo's gripping color photo series "Negra Menta" features a black woman, painted even blacker, in a white dress, against a white ground. In one photo she holds a gun; in another she's in shackles; in another she takes a taste from a silver ladle. She's a figure activated by all the shadow material - fears about women, fears about race - that the culture pours into her. Angulo's photos compel us to see the woman as well as the symbol she portrays, which makes the work as heartbreaking as it is sharp.

Karen Moss's deft walnut-ink drawings mimic the style of Dick-and-Jane children's book illustrations, but her Dick and Jane are mutants, animals with human heads. Jennifer Trausch's large Polaroids were shot in depressed areas of the South. "Clarence (Sparta, N.C.)" is a lush evocation of poverty: A gaunt man peers out of the back door of a theater, at a threshold of light and darkness.

Patte Loper combines elements from different histories and fictions in a sweet, dark painting on paper, "Beneath a Cloudless Sky, The Wind at Their Backs," which sets Bambi-like deer in an arctic landscape outside a military building - a hangar, perhaps. There are more artists in "Meconio," each in her own way pointed and defiant, adding up to a show that is oddly random, yet refreshing.

Niho Kozuru's totemic rubber sculptures at the Boston Sculptors Gallery glow and ripple, giving new life to the elegant but staid forms we associate with neoclassical furniture made in New England in the 18th and 19th centuries. Kozuru's work melds elements of her past: The rubber forms that she casts from turned wood echo the circling of a potter's wheel; the artist comes from generations of Japanese ceramicists. Her family moved from Japan to Topsfield when she was 12.

In addition to the totems (such as "Pistil," a red and amber column), Kozuru impresses items such as finials and pine cones into beds of rubber, removes them, and hangs the beds vertically. Light passes warmly through them. Her newest work, the "Liquid Sunshine" series, features smaller, more modern-looking elements with crisp edges. These feel exploratory, not entirely realized as Kozuru moves into new forms of her own invention. 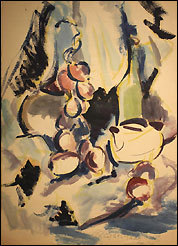