She's a portrait of passion 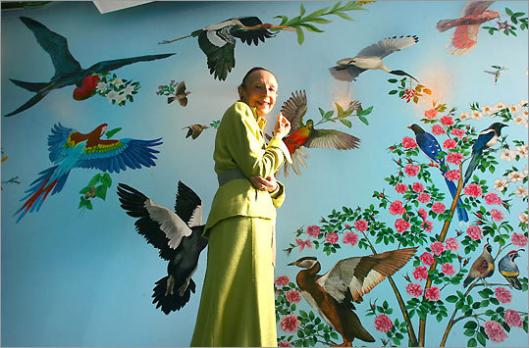 Estrellita Karsh - widow of famous portrait photographer Yousuf Karsh - spends a lot of time at Brigham and Women's Hospital, and about four years ago she decided there was something she really loathed about it.

The bridge that connected the hospital with Dana-Farber Cancer Institute - a long, narrow passageway through which patients shuttle back and forth for treatment - was hideous. The institutional beige paint was peeling, and the corridor was drab and scary. "Here were people going to chemotherapy and walking, all hunched over, like they were avoiding a rainstorm," she recalls. There was a black ceiling, mildew, rusty pipes. There were signs on the wall that were totally irrelevant and nothing to welcome them on the other side."

It needed a mural, she decided - something uplifting, with birds, would be nice - so she went right to the office of hospital president Gary Gottlieb to let him know. ("Why go to a functionary?" she says. "You get an apparatchik, and you're dead.")

In 2005, two years and half a million dollars later, the hospital unveiled the Bridge of Hope, a transformed passageway with a lush mural of 149 life-size birds in flight carrying sprigs of medicinal herbs; it was created by Nan Freeman of the School of the Museum of Fine Arts with the help of student assistants.

The bridge is one of many ways that the energetic 77-year-old Karsh has been making a mark on major Boston institutions. Although by native standards she's practically a newcomer (the Karshes moved here from Ottawa 10 years ago), the former medical writer and historian is getting things done in a manner that reflects her passions for medicine, art, and the photography of Yousuf Karsh.

She is bringing art - and her husband's photographs - to hospital corridors. She endowed a curator position at the MFA, the Estrellita and Yousuf Karsh Curator of Photographs. She's created a fund for Brigham nurses to improve patient care.

Together with her husband, she established the annual Karsh Lectureship in Photography at the MFA, a series that features talks by noted photographers. (This year's lecture, on Nov. 7, is by photographer, actor, painter, and filmmaker Dennis Hopper. The lecture is sold out.)

And as the centenary of her husband's birth approaches, she is seeing to it that Boston will not overlook the legacy of Karsh, who captured some of the most influential figures of the 20th century during a 60-year career.

He photographed every pope and American president during his lifetime (Hoover through Clinton); Queen Elizabeth (six times); and legions of statesmen, writers, artists, scientists, and performers. His wartime portrait of a defiant Winston Churchill has been called the most widely reproduced photographic portrait in history. His painstakingly composed portraits, marked by dramatic poses and strong shadows, were so distinctive that the word "Karshed" has found its way into photography vernacular.

The Karshes donated some 200 of his photographs to the MFA, and the museum will host what she calls an "unKarshy" exhibition of his work next year. There will be another exhibition of his portraits of famous authors at the Boston Public Library, where she is a member of the trustees' collections committee.

She's also established permanent collections of his photos around town, in some unlikely venues. There's a gallery of his photographs of famous women at the Gretchen S. and Edward A. Fish Center for Women's Health in Chestnut Hill, an outpatient practice of Brigham and Women's. "This is a women's center, and it would be nice to have other women there comforting them," she says.

Yousuf Karsh, who was born in Turkey and fled the Armenian massacres for Canada, died in Boston in 2002 at the age of 93. The couple had no children, and it's clear Estrellita is still utterly smitten with him.

"He was a sweetheart, my husband," says Karsh, who refers to him formally as "Mr. Karsh," though an occasional Yousuf slips in from time to time. After his death, she was devastated, says Jerry Fielder, the California-based Karsh curator and a close family friend.

But "fields that lie fallow bloom again," Karsh says brightly on what would have been the couple's 45th wedding anniversary, over lunch at a favorite haunt, the Taj Boston.

Karsh is a tiny woman given to Chanel suits and Hermes scarves, although she insists she wears clothing from Target, too. "And I buy everything on sale." She lives in an apartment near the Public Garden which she declines to show to a reporter but concedes there are no Karsh photographs in it except family photos. She considers Brigham and Women's and the MFA her "family," and seems to know, and warmly greet, almost everyone from the hospital chaplain to MFA director Malcolm Rogers to the hotel doorman.

At a time in photographic history marked by celebrity worship and diminished respect for grand, idealizing portraiture, Karsh's photography has not been without its critics. His style has been described as uninventive and monotonous; a 1996 MFA show of Karsh portraits was savaged by a Globe critic as "a boring, self-conscious, superficial take on a very famous subject."

Estrellita Karsh maintains her husband's photographs are not only relevant, but uplifting. "They don't only speak to me; I think they reach out from one human being to another," she says. "Photographic styles change but people don't change, and people's relationships with each other don't change. These are portraits by an artist who has a relationship with someone, to the extent that they are willing to show the best parts of themselves and their humanity, and to share it."

This is why she likes to install them in health-care facilities. She is vexed by medical offices with blank walls: "Looking at nothing is counterproductive to your health." She has given prints of some of her husband's best-known photos - including the iconic Churchill portrait - to Brigham and Women's Bretholtz Center for Patients and Families, where families and friends await news of patients in surgery. "This place," she says, offering a tour, "is where my heart is."

"Estrellita feels that healing and medicine are an art and that art can be healing," says Katie Getchell, deputy director of the MFA, and a close friend. "She is always looking for a need, she likes to make a difference, and she loves to pull all the pieces together."

Karsh has always been intrigued by the emotional aspect of medicine. Born in Newark, N.J., and raised in Brooklyn, she majored in English and psychology at Antioch College in Ohio. She worked as a co-op student at the National Society for Crippled Children in Chicago and at hospitals in New York and Detroit, where she says she learned about health care from the patient's viewpoint.

After graduation she moved to Chicago to work as the editor for Dr. Walter C. Alvarez, a retired physician who wrote a syndicated medical column; she worked with him for a decade, collaborating on articles and books. After her marriage in 1962, she continued to work, writing essays for the annual medical volumes of the Encyclopedia Britannica, among other publications, and conducting much of her research at Harvard's Countway Library of Medicine.

In 1975, she curated an art exhibit in Boston, featuring Boston artists who were also physicians, but after a few years cut back on her work to accompany her husband on assignments.

She was with him when he photographed Nikita Khruschev, Henry Moore, Gamal Abdel Nasser, among others, and has astonishingly precise recall of their encounters, which she delights in sharing. Some Estrellita-isms:

"There was Khruschev in a Brioni suit. Everyone dressed well at that level. It was an oligarchy, of course."

"I remember Mies van der Rohe sitting like a Buddha in a wheelchair. His apartment knocked me out. It was like walking into the Bauhaus."

"Jacques Lipchitz had a house in Pieve di Camaiore you could reach only by ruining your tires. He said, 'Karsh, I vant to sculpt you.' "

"Yousuf Karsh was the photographer in the family," says Karsh curator Fielder. "But she has a photographic memory."