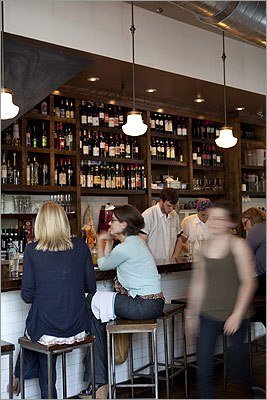 AKA BISTRO
Lincoln has historic sites, modern art, and pastoral landscapes. But until March of last year, there weren't any great restaurants. So it was a huge boon when Chris Chung and Christian Touche arrived and set up shop. Chung was previously sashimi chef at Uni in Boston; Touche was the general manager of its sister French restaurant, Clio. At Aka, they bring both elements together with a menu of ethereal raw fish dishes and Gallic classics. Diners take seats at the sleek sashimi bar or elsewhere in the modern dining room. There aren't many places one can enjoy a meal encompassing spicy salmon tartare, rock shrimp tempura, frisee aux lardons, and duck confit. In Lincoln, there's exactly one. Aka Bistro, 145 Lincoln Road, Lincoln, 781-259-9920, akabistrolincoln.com