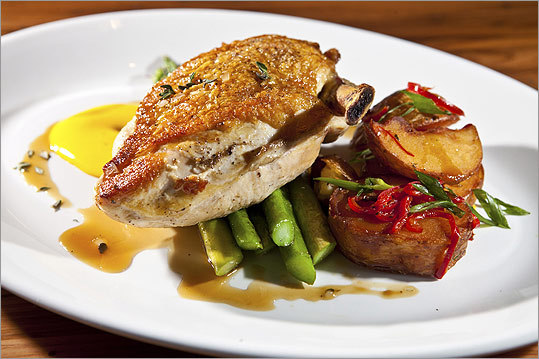 Aram Boghosian for The Boston Globe
Boston and Cambridge

TICO
Lobster tacos and tequila are 2011's version of the upscale pub fare and whiskey we saw everywhere in 2010. As food trends go, I'll take it. Lighter, spicier, it reflects optimism. Of all the new restaurants embracing this cuisine, Michael Schlow's Tico may be the most anticipated. The food is influenced by Mexico, but also Spain and South America. On some nights, the flavors sing and the food is excellent. On others, there are flaws: not enough heat, not enough acid, not enough oomph. More than a serious Boston restaurant, Tico feels like a nightspot serving good food. But Schlow and company aren't trying for serious. They feel it in the air. We're ready for a party. Pictured: golden chicken with asparagus and potatoes. 222 Berkeley Street, Boston, 617-351-0400, ticorestaurant.com