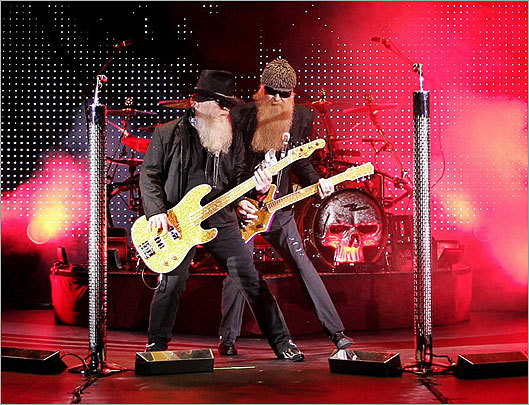 (Robert E. Klein for the Boston Globe) ZZ Top band members Dusty Hill and Billy Gibbons performed with the rest of the band at the Orpheum Theater in 2009.
By Steve Morse / Globe staff August 20, 2012
Text size – +

This story was originally published in the Boston Globe May 1, 1980

The moral of this story is that you can't keep a bunch of rough-and-tumble Texans in line forever. The dam has to burst sometime.

"For six to seven years we had somebody telling us what to do," says ZZ Top drummer Frank Beard. "You've got to have a road manager when you're a band of Texans, because we're just so wild that we'll do what we want to do. Like in the morning if you're sleepy it's so easy to say, Screw it! Screw the show! I ain't going.' So you have to have somebody all the time riding herd on you."

For ZZ Top, a raw and bluesy trio which prides itself on being that "little ol' band from Texas," the pressure reached the breaking point after 1976's worldwide "Taking Texas to the People" tour. That brawny, grand-scale tour featured 75 tons of sound equipment (twice as much as on the Rolling Stones' mammoth 1975 tour), plus a stage show that was like a traveling Texas landscape - including a live longhorn steer and 2000-pound black buffalo (both raised up by hydraulic lifts), two tethered vultures and two rattlesnakes.

"After that tour," sighs ZZ Top lead guitarist and vocalist Billy Gibbons, "we were a little bit frayed around the edges."

The upshot was that ZZ decided to just break out of line and disappear for a while. The band, which performs Saturday night at the Boston Garden, took off in different directions on a two-year, anything-goes holiday. "During that time we were virtual unknowns to each other," Gibbons says during a recent telephone interview.

It was a time, apparently, for living out fantasies. Gibbons lived in New York City and the Caribbean, also stopping in Paris, where he fell in with a clique of artists and was treated like an "exotic critter" by them.

As for Beard, the plain-talking drummer adds, "Let me just say I did whatever the hell I wanted to do. . . . If I didn't want to do nuthin' for two months, I didn't."

Beard did spend time learning to operate a studio in Houston, and he cut loose in some unchained directions in the Caribbean. "I lived like a bum in St. Thomas, where it was the complete beachboy syndrome. Then in San Juan it was the socialite, international-playboy syndrome - the casino every night and dressed to the tee."

And how about the whereabouts of bassist Dusty Hill during this goodby-to- reality interlude?

"The Dust is very secretive about what he did," laughs Beard. "The best I can understand is that he spent a whole lot of time in Mexico. He's always loved Mexico. I don't know if it's the senoritas or what it is. For a while he was in Nassau. When I heard where he was, I hopped a ship over and just missed him on Freedom Island. But I really don't know what else he did - whether he barely escaped with his life and didn't want to get in trouble about being in places he shouldn't be, or if he went down and apprenticed as a bullfighter or what."

One thing for sure, however, is that ZZ's manager and producer, Bill Ham, was back in Houston pulling his hair out as time went on.

"We wouldn't report in for months and months," Beard continues. "I'd call in and say Hey Bill, what's happening?' And he'd say, Where are you? Where are you?' I'd say, Aw man, I'm in the Caribbean.' And he'd say, Well, damn, call me next week. I think I found Billy. And hey, we got a new contract with Warner Brothers.' And I'd say, Sure man, call you next week.' Then three months later I'd call him back and say, Hey, did you find Billy?' And he'd say, Yeah, I found him but I lost him. Hey, where are you? And where's Dusty?' "

Pondering a moment, Beard adds, "It was kind of a cruel thing to do to him, yet at the same time it seems to have worked out very well."

Going their separate ways was a godsend, the group agrees. "All hats off to that two-year holiday. It's done wonders for our physical and mental attitudes," says Gibbons.

One by one they straggled back last year to their home base, Houston, and were ready to resume the rock 'n' roll life. "There was never any doubt we'd get back together," says Beard. "I never ran into anybody I'd rather play with than these two guys. None of us feels stifled in our musical direction. We all contribute equally to what we do, so we all feel potent in the band."

The first day back they headed down to their rehearsal warehouse and good- naturedly played 11 hours of blues. The next day they came up with two typically raw ZZ items that would appear on their new "Deguello" album - "HiFi Mama" and the off-the-wall "Manic Mechanic," a throaty-voiced paean to car racing. It is a tune that has become a real crowd favorite.

"Manic" is an ode to an old friend who sounds a bit like the Chief in Ken Kesey's novel, "One Flew Over the Cuckoo's Nest." Says Gibbons: "There was this guy I knew back when I was 17 or 18 who used to race cars. We called him Hands' because he had these gigantic hands big enough to pick up a racing tire with one hand. He was real sensitive about it. He was an Indian and was the biggest guy I'd ever seen. He was incessant about his car racing and believe it or not, his voice sounded like that on the record."

What happened to him? "He just disappeared from the racing circuit after several years and was never heard from after that. Then this rumor spread that he was dead. But he's still talked about, I guarantee you."

An automobile theme plays a significant part in ZZ's new tour, which Gibbons is naming their "Hot Rod Tour - it's straight ZZ; just a little more streamlined, maybe with a few more carburators." The band (minus the Texas animals this time) will be showing a movie of its 1965 Chevy convertible car, which was just restored by some friends. The car was acquired by the band around the time they also owned a bar in Durango, Mexico, in 1970.

The car is a trick car that's been adapted for "low riding." Asked to explain, Gibbons says, "It's outfitted with hydraulic lifts so you can raise or lower the car as you drive."

Low riding, he elaborates, is primarily a Mexican craze that is sweeping through the Southwest. "It goes like this: Mexicans find old cars anywhere

from 1938 up to the present. They strip out the suspension, the coils and the shock absorbers, and replace it with aircraft landing cylinders. These are pumped up by hydraulic pumps similar to the ones you might find on a loading lift gate of those delivery trucks. That is in turn powered - actually overpowered - with 48 volts of battery power coming from four car batteries, which, when connected up to a 12-volt motor, has the tendency to make the car hop off the ground. It's just the most inane thing you've ever seen. So we've got the car going up and down in the film."

A postscript on low riding: "The hot-rodding folks are jumping on the bandwagon now . . . but we pride ourselves that when I was running that bar in Mexico we had one of the very few cars in the country. Now there are literally thousands out on the road. But it's still quite novel to parts of the country not familiar with low riding. So keep your eyes open during the tune, She Loves My Automobile.' You'll see it up-and-downing itself a bit."

After the long layoff, ZZ has returned with more Texas-bred confidence than ever. For one, they just up and decided to learn how to play saxophones on their new album. They bought three $3000-apiece horns ("We're Texans; we don't know how to blow one lick but we go out and buy the three best horns," says Beard), and hired a leading horn teacher in Houston.

For another, they don't care about bucking today's prevailing rock trend against beards. "Dusty and I," counters Gibbons, "are both sporting chest- length chin whiskers. Yeah, we've just let 'em fly. He had grown his out and so had I. When we finally got together we just Smith Brothered each other to the corner." (Adds Beard: "It's just wild walking through an airport with these guys.")

Such chin-growths are particularly outdated among punk-rock musicians and fans, but Gibbons likes to tell the story of a recent concert in Miami where "there in the front row were 20 punkers just pogoing their life out to ZZ Top music. I said, My, something has happened.' You know, we've really escalated in the hip factor now. There are so many cross-sections of people out there at our shows that it's just an indeterminate kind of eclectic mix of happy faces. That's what keeps us going."

The band members have doffed their rhinestone suits of the past but are still looking outrageous on stage. According to Beard, "Billy takes on this image of a sort of 19th-century preacher, the evangelistic type that traveled around in the covered wagon . . . Dusty, he appears to be some sort of soldier of fortune, maybe in Africa . . . And I, well, I've never really found my place to go in all of this. In '76 I was sort of the Mexican against their cowboys (I like to play in the looser-fitting Mexican type of peasant clothes). On this tour I'm set apart once again, but this time it don't make any difference because I lowered the stool about 5" and raised the drums and you ain't gonna see me anyway."

But one thing that hasn't changed with ZZ - long layoff and all - is the band's determination to get their Texas-brand blues across to the audience as forcefully as possible.

"Make no mistake about it. We're still loud and we'll still move you across the floor," promises Beard.*

Steve Morse is a pop music writer for The Globe.