We all have those moments when talk turns to seminal artists. "Hey, what do you think of Bruce Springsteen's new one?" or "I don't know, man. I kind of like Joni Mitchell's 'Blue' better than 'Court and Spark.' "

How mortifying, then, when you have to confess: I don't like those icons. You know you're supposed to - judging from the mouths gaping in disbelief - but you simply don't. Sure, you can acknowledge and even appreciate an artist's brilliance and vast influence. Bob Dylan is the granddaddy of modern songwriting, but that doesn't mean you want to hear his grizzled croak while curled up by the fire. Led Zeppelin are rock gods, but for naysayers, "Stairway to Heaven" is more like a descent into hell.

At the risk of losing the respect of friends and family - and critical credibility, while we're at it - our music writers have decided to reveal the sacred cows we're not afraid to tip. But really, Mike, you don't like the Beatles? That's just shameful. 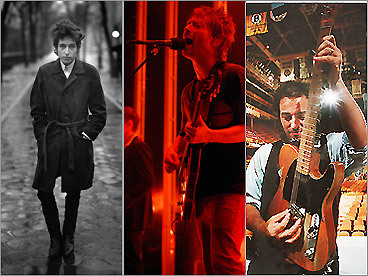