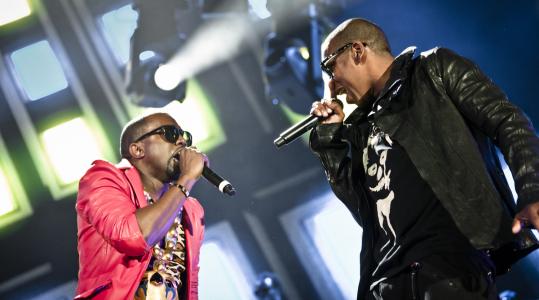 Kanye West (left) and Jay-Z (pictured performing together last year in New York) have teamed up on the new album “Watch the Throne.’’ (Chad Batka for The New York Times/File 2010)
By Julian Benbow Globe Staff / August 9, 2011

An album in which Kanye West and Jay-Z come together, call themselves “The Throne,’’ and tell everybody to watch them? Hyperbole is practically its birthmark.

Is Jay-Z the greatest rapper of all time?

Are they the two most influential rappers of the past 10 years?

“Watch the Throne’’ came with a release strategy that was remarkable in itself. It dropped yesterday digitally on iTunes, four days before the physical albums will go on sale, initially in a exclusive. It didn’t spill all over the Internet prematurely, a milestone in an age when so many albums are a search away. There’s a massive tour that comes to the TD Garden on Nov. 21, and reportedly there’s already a logistical issue trying to find room for both of their egos. Which raises another question: If there were a battle between Jay-Z and West, who would win?

This is all before hearing a verse, let alone a song, and none of those elements evaporate when you start to peel back the layers on “Watch The Throne.’’ The fact that West is at the height of his rap powers is unavoidable. Sonically, his fingerprints are all over the album. It’s as massive, dour, and relentlessly unconventional - if not as personal - as last fall’s “My Beautiful Dark Twisted Fantasy,’’ with beats from the RZA (“New Day’’) and Q-Tip (“That’s My Bitch’’) and a pair of appearances from Odd Future crooner Frank Ocean (“No Church in the Wild’’ and “Made in America’’). Lyrically, West sounds like he feels invincible, and it’s only more noticeable with Jay-Z rhyming right next to him.

On “Gotta Have It’’ Jay-Z calmly spits a carefully crafted verse about holding kids hostage and wrapping them like mummies until he gets some money that he’s owed back. Then West barges in.

It’s absurd, but it’s clever. Meaningless, but essential. West can get away with murder, and he knows it.

At points, he seems like he’s dragging Jay-Z with him. There’s a verse in “New Day’’ in which West sounds so vulnerable, talking about not wanting his son to make the same mistakes he did - from breaking up with his college girlfriend to blasting the president on national TV, dating a stripper, and moving his (now deceased) mother to Los Angeles. (He probably wishes he could have that Hitler comparison from this past weekend back, too.)

It’s the kind of stuff Jay-Z made a career steering clear of, and he doesn’t necessarily want to come anywhere near it this time. But because of West, he does. His very first words on the album are about religion - and his own lack thereof - on “No Church in the Wild.’’ (West’s likely to blame for the dubstep sampling “Who Gon Stop Me,’’ too. That’s not Jay-Z’s style.)

They still sound like two solo rappers. But there’s an undeniable synergy that they embraced for this project. They run rhyme relays on “Otis’’ and “Welcome to the Jungle,’’ picking lines up where the other left them. Jay-Z feels at home on West’s beats. West is giddy to rap with his idol.

It all clicks on “Murder to Excellence,’’ essentially two songs fused together: one a Swizz Beatz concoction about cyclic black violence (“314 soldiers died in Iraq,’’ West raps. “509 died in Chicago’’), the other produced by S1 about the narrowness of black success. (“Only spot a few blacks the higher I go,’’ raps Jay-Z.)

There was a point when West was Jay-Z’s pupil. They’ve been peers for a while now. This album isn’t as much about watching the throne as it is about passing the torch.