From Mozart to Part to Szymanowski, marvels abound 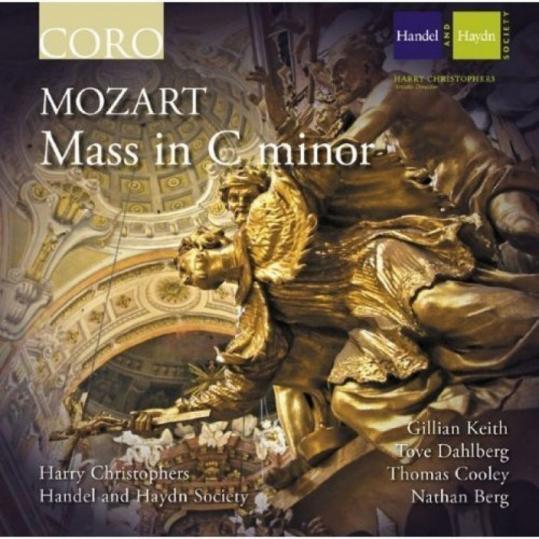 Many music directors long to record with their ensembles but few show up for work with established labels in their back pocket. That, however, is exactly what happened with Harry Christophers, now in his second season as director of Boston’s Handel and Haydn Society. Christophers founded the Coro label to support the work of his UK-based choir, The Sixteen, but he will now also be putting it to the service of documenting his tenure with H&H, beginning with this newly released disc devoted to Mozart’s Mass in C minor, recorded live in Symphony Hall in January.

It’s an appealing account that has heft without stolidity, moments of introspection but also a sense of outward dramatic flair. The recording most notably shows just how quickly Christophers has lifted the level of the H&H chorus, which performs here with precision, clarity, and expressive range. You wouldn’t mistake this for a pristine studio recording, yet the live performance setting also surely accounts for some of its appealing energy. The soloists — Gillian Keith, Tove Dahlberg, Thomas Cooley, and Nathan Berg — are a capable group, with Dahlberg and Keith shining particularly brightly in the “Laudamus te’’ and the “Et incarnatus est,’’ respectively.

Los Angeles Philharmonic Esa-Pekka Salonen, conductor ECM Estonian composer Arvo Part waited 37 years after his Third Symphony (1971) to complete his Fourth (“Los Angeles,’’ 2008). Not that he hasn’t been busy. Since leaving the Soviet Union in 1980 as a political outcast, Part has been producing impressive works for chorus and orchestra and has established himself as a unique and essential figure in the minimalist movement. He has described his style as “radical austerity,’’ employing a very few basic elements in a slow, constant flux. One of his favorite devices is the canon, a repeating melodic sequence that serves as the underpinning for a gradually expanding texture.

In the Symphony No. 4, written for the Los Angeles Philharmonic and its former music director Esa-Pekka Salonen, Part uses the “Canon of the Guardian Angel’’ from the Orthodox Church Slavonic liturgy as a spiritual tribute to “The City of Angels.’’ In three sections (“Con sublimita, Affanoso, Deciso’’), the symphony forms an orchestral pair with the acclaimed 1998 a cappella choral work “Kanon Pokajanen,’’ recorded in Tallinn, Estonia, in 1997. Surprisingly romantic and even reminiscent of Sibelius, particularly in the lush string writing, the Symphony No. 4 shimmers with Part’s trademark tintinnabulation, or ringing of bells and chimes.

Part dedicated the symphony to the Russian entrepreneur Mikhail Khodorkovsky, imprisoned for his political opposition by Vladimir Putin’s regime in 2003, as “an expression of great respect for a man who has found moral triumph amid personal tragedy.’’ The urgent, passionate performance (recorded live in January 2009) is further testament to the special chemistry Salonen enjoyed with the LA Philharmonic during his remarkably creative tenure there. HARLOW ROBINSON

Dmitri Hvorostovsky, baritone, and Ivari Ilja, piano Delos CD Few writers of any nation can compete with the remarkable popularity of Russia’s Alexander Pushkin (1799-1837) among composers. One meticulous musicologist has determined that 1,000 composers have used 500 different works by Pushkin for more than 3,000 compositions, including operas, ballets, and more than 2,000 songs (“romansy’’ in Russian). On this disc, Dmitri Hvorostovsky, the superstar heart-throb Russian baritone, croons through a rich and varied selection of 17 Pushkin songs by 10 Russian composers, ranging from familiar ones by Mikhail Glinka and Pyotr Tchaikovsky to lesser known offerings by Nikolai Medtner and Alexander Vlasov. Using his burnished, manly voice mostly to ravishing effect, Hvorostovsky strikes a felicitous balance between classical restraint and bottomless wintry despair. Especially fine are his refined, musically astute readings of Rimsky-Korsakov’s dreamy “The Clouds Begin to Scatter,’’ Tchaikovsky’s rustic ballad “Nightingale’’ and the bleakly nostalgic “The Crimson Forest Sheds Its Attire’’ by Soviet composer Georgi Sviridov. Its last verse (“I drink alone . . . ’’), delivered in a near-whisper, will reduce even the most jaded listener to tears. Estonian pianist Ivari Ilja provides equally distinguished accompaniment. H.R.

Flórez has a bright, warm timbre, great flexibility, an easy top register, and respects the score and text. It is a pleasure to hear someone singing within his vocal budget, as it were. One relaxes as one does when Roger Federer is on his game, and just marvels. The ease and personal quality of Flórez’s singing makes florid music a joyous experience, beginning with Fux’s Alleluja (with a fine trumpet obbligato). Equally successful are pieces with long sustained lines, Franck’s “Panis Angelicus,’’ for example, and an aria from Haydn’s “Creation,’’ sung in German. The “Comfort ye’’ from “The Messiah’’ lacks some pliancy and warmth in the opening section (one thing Florez’s voice can’t do is thicken or spread itself out); but the runs of “Every valley’’ can never have been faster or more even. The “Kyrie’’ from Ramirez’s folk masterpiece, “Missa Criolla,’’ is sung idiomatically, of course, but at a slow tempo that drains it of some energy. One of Florez’s own works in a folk idiom, “Santo,’’ concludes, a nice personal touch for a winning album.

SZYMANOWSKI: Violin Concerto No. 1, Symphony No. 3

Vienna Philharmonic Pierre Boulez, conductor Christian Tetzlaff, violin Deutsche Grammophon Karol Szymanowski is not a household name in the United States, not even among classical musicians. He died before World War II, never having visited here, and the arrival of Bartok and Stravinsky shut the door to late-romantic European music (except in movie studios). Szymanowski’s early music is shimmering, ecstatic, and Impressionistic, with elements of Debussy and Scriabin. Just as Alexander von Zemlinsky, Szymanowski’s contemporary, found an advocate in conductor James Conlon a few years ago, so Szymanowski has found an ideal champion in Pierre Boulez, who was impressed by the a piece for violin when he was a student. It’s paradoxical that the French conductor-composer, a rationalist-modernist, should enjoy this ultra-lush “retro’’ music. At 85, Boulez seems to be conducting what he missed as a young man. Szymanowski’s music emerges from his hands with clear architecture and transparent textures. The Violin Concerto No. 1 is largely virtuoso display and soloist Christian Tetzlaff plays brilliantly. The Symphony No. 3 (“Song of the Night’’) is more subdued and atmospheric, a rolling wave of ecstasy with chorus humming in sections, under the glinting starlight of glockenspiel and harp. The title-poem by the Sufi mystic Rumi (Szymanowski found homoerotic freedom in the Middle East) is set to music in the first and last movements, and sung, with admirable tone, by Australian tenor Steve Davislim. The Vienna Philharmonic sounds gorgeous, and the sound engineers of Deutsche Grammophon have created another marvel. D.P.