A sunny follow-up from She & Him 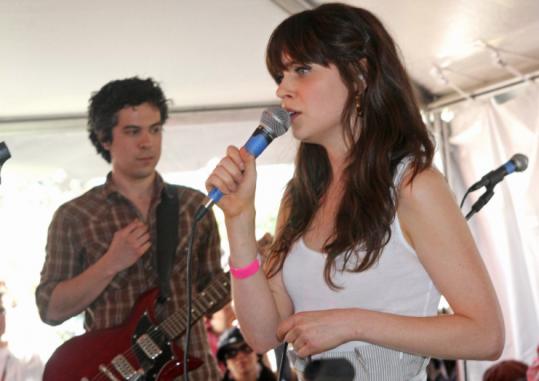 The second chapter in the musical tale of She & Him is nearly as intoxicating as the first.

“She’’ is actress Zooey Deschanel, most recently swooned over in “(500) Days of Summer.’’ “Him’’ is M. Ward, critically acclaimed indie troubadour and one quarter of the 2009 supergroup Monsters of Folk. The pair met and bonded while working on the soundtrack to her 2007 film “The Go-Getter.’’

Though some thespian-turned-musician skepticism greeted the pair’s 2008 debut, “Volume One,’’ it proved to be an analog-fetish’s sepia-toned delight. Her dusky vocals and retro pop and country songwriting sensibilities intersected neatly with his affinity for tidy chamber folk production.

With the back story out of the way, Deschanel and Ward continue their winning ways on “Volume Two,’’ drawing on their shared love of everything from Bobbie Gentry to Wilco.

The most marked difference on the sophomore effort is its clearer reach for sunniness. Where a sense of rain-streaked melancholy occasionally appeared on the horizon the first time around, the sensibility here is much more top-down, volume-up ’70s AM gold.

The prime example of this is boppy summer jam “Ridin’ in My Car.’’ The cover of one of NRBQ’s best gets such appropriately ecstatic treatment you can almost feel the warm wind rushing through your hair.

The pep talk that is “Me and You’’ mines a similar vein, complete with instantly irresistible “ba da da da’’ backing vocals.

The shambling “In the Sun’’ may make mention of Deschanel’s heart taking a beating but the cheery tune and a vocal assist from Tilly and the Wall keep the mood upbeat.

The duo can’t keep the blues at bay completely, and the album is the better for it in the attractively sorrowful corners of “Thieves’’ and the waltz-time, acoustic weeper “Brand New Shoes.’’

During their first at-bat Ward and Deschanel went with can’t-miss but well-worn covers by Smokey Robinson and the Beatles. This time they dig a little deeper and hit the ball even farther.

In addition to the NRBQ track, the pair tackles Skeeter Davis’s later-gator kiss-off “Gonna Get Along Without You Now.’’ It’s a sassy soul jewel that Deschanel shimmies through with a light touch that still manages to sting as she taunts, “I’m gonna find somebody twice as cute because I didn’t like you anyhow.’’

The album closes with the beguiling lullaby “If You Can’t Sleep.’’ Deschanel puts the record to bed with a gauzy vocal that is the aural equivalent of a warm tuck-in.

While “Volume One’’ had a pleasant shock factor going for it, given Deschanel’s sturdiness as a singer-songwriter, “Volume Two’’ makes clear that the duo isn’t just dabbling but settling in for the long haul. It sounds like it’s going to be a lovely ride.