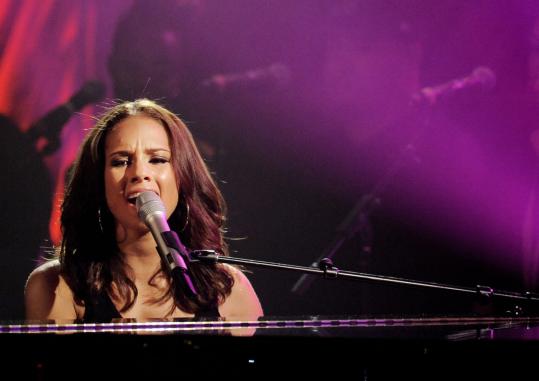 Three studio albums into her Teflon career, Alicia Keys has presented her talent in many splendors: tasteful piano prodigy, paragon of self-empowerment, measured soul singer, and, most recently, streetwise confidante to Jay-Z on their radio hit “Empire State of Mind.’’

Yet we’ve never heard Keys like she sounds on “Love Is My Disease,’’ the standout track from her startlingly assured new album, “The Element of Freedom,’’ out tomorrow. The song opens with Keys gutted and coarse, not exactly a flattering portrait of the 28-year-old artist. “I thought love would be my cure/ But now it’s my disease/ I try to act mature/ But I’m a baby when you leave,’’ she sings, her voice snagging on the word “baby’’ as if hurting too much to say it aloud.

It’s a raw and brave performance, one that we don’t expect from our modern multiplatinum divas, much less a Grammy-winning superstar of Keys’s caliber. More than that, though, “Love Is My Disease’’ marks a surprising shift in Keys’s straight-down-the-middle R&B. Warts and all, she’s visceral and compelling on this new album, to the point of making you uncomfortably close to her heartache.

She doesn’t go into specifics, but she is obviously working through a particularly painful time of transition on this album. For Keys, the notion of freedom comes from addressing her problems with love while also taking blame for some of them.

There’s something austere but sturdy about several of these new songs, as though their hard shells are concealing a tender soft spot Keys isn’t ready to expose just yet. Channeling some of the space and intensity of Kanye West’s “808s & Heartbreak’’ (especially the thunderous drum loops), it’s not at all self-indulgent. There’s a sprinkling of sass from Beyoncé’s “I Am. . . Sasha Fierce,’’ but never enough to supplant Keys’s own stamp on the music.

So much of “The Element of Freedom’’ sounds big and airy, hulking but with a heartbeat. We’ve heard this template a lot in the past few years, courtesy of OneRepublic’s Ryan Tedder, who has penned epic ballads for Beyoncé (“Halo’’), Kelly Clarkson (“Already Gone’’), Jordin Sparks (“Battlefield’’), and Leona Lewis (“Bleeding Love’’).

Keys, who cowrote all but one of the 14 songs, didn’t work with Tedder, but his influence is felt all over this record. After a spoken-word intro, a pointless preface Keys often employs to set the mood, the album slides into its sleekest moment, “Love Is Blind,’’ which strikes the unlikely balance between sensual and depraved. Picking up the pace over ’80s synth lines and a metallic drum sound, “This Bed’’ bounces to the beat of a long-lost Whitney Houston hit.

With Jay-Z missing in action, Keys goes solo on “Empire State of Mind (Part II) Broken Down,’’ which opens to strains of the hook she sang on the version they recorded together. Hers is a little more earnest and hits its stride, briefly, at the 3-minute mark with the band finally kicking in for a propulsive ending.

After so many highlights, the duds feel inconsequential, easily bypassed. Only when Keys panders to Top 40 radio does the album truly stumble, sounding like a hodgepodge of transparent ideas. “Try Sleeping With a Broken Heart’’ starts with piquant tension between Keys’s whisper-thin voice and dense drum thuds, but then it blasts off into a chorus that climbs a mountain only to leave Keys stranded there.

“Put It in a Love Song,’’ featuring Beyoncé in high vamping mode, has already made its way to radio, but it’s a slip of a song, coasting on its contagious chorus and delivering little more. And “That’s How Strong My Love Is,’’ the lone song Keys wrote by herself, comes off overly polite in its florid piano melody with the singer promising, “Through the shake of an earthquake/ I won’t ever fall/ That’s how strong my love is.’’

That sort of hollow sentiment feels woefully out of step on an album that’s so hellbent on casting Keys in a new light, even when it’s so dark you can barely see her.