Passions shine through on actor's debut 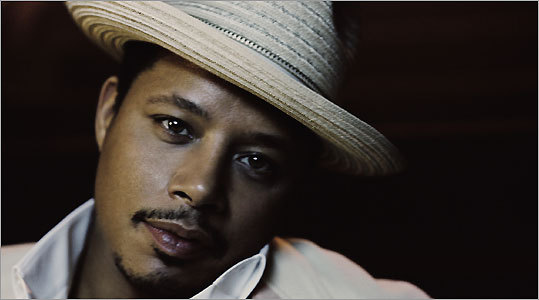 Movie stars who make albums are a dime a dozen these days, and the songs often aren't worth much more. The real challenge for the actor-musician is getting past the knee-jerk (and mainly accurate) assumptions: He was signed because he's a celebrity. Talent or no talent, she's rich enough to bankroll a first-rate vanity project. Isn't it a little greedy grabbing for rock 'n' roll glory when you've already got an Oscar on the mantel?

The trick is listening to the actor-turned-musician with an open mind. It pays off with Terrence Howard, star of "Hustle & Flow," "Ray," and "Crash," who tosses his tunes into the ring today with the release of "Shine Through It." Music, we learn from Howard's press materials, was the actor's first love (i.e., his real, raw, original, authentic passion). It's a worn-out selling point, but lo and behold, Howard has put tremendous passion into the album, which he wrote, produced, and arranged with bassist Miles Mosely, and on which he plays nylon-string guitar and sings in a persuasive assortment of whispers, shouts, chants, and quivers.

The album's lead track and single, "Love Makes You Beautiful," sets the template for the collection: It's unfashionably dramatic, genuinely dynamic, and deeply felt. The song - let's call it theatrical soft-rock - opens with a shivering melody and delicate flute, gathers steam with coiled strings and a childlike choir, and achieves emotional liftoff with Howard's rough-edged, horn-stoked declarations. Instead of a bridge there's a spoken passage recited by Howard's daughter, recorded over the telephone. The project is, perhaps predictably, cinematic.

Howard reportedly scored his record contract by convincing honcho Rob Stringer that he wanted to make music in the mold of Don McLean's "Vincent," and while that hardly seems like a deal sealer in 2008, Howard kept his promise to make a serious, stately pop collection. That's not to say any of these songs are works of great art, or even especially memorable. They are thoughtful, well-built showcases for Howard's mercurial tastes.

The title track is a delicate soul tune with a spiritual streak that builds beautifully, while "Mr. Johnson's Lawn" is a classy mash of Cuban breezes and urban beats. Howard explores intersections - of rock and R & B on "Plenty," jazz and spoken word on "It's All Game," bawdy blues and sophisticated attitude on "She Was Mine." He touches on folk, flamenco, and textbook singer-songwriter fare, and every song - eventually - is lushly orchestrated, giving the album an upscale Broadway vibe.

As a lyricist, Howard toggles between confessional and inspirational. "I was thinkin' money/ I was thinkin' deals/ I was thinkin' honey girl chill," he sings on "No. 1 Fan," a point-blank admission of guilt for the disintegration of his marriage. The three words that form the chorus of "Shine Through It" are more mantra than refrain, and Howard looses them with the tenderness, and then the vigor, of a man who's trying hard to take his own advice.

Maybe he's just a good actor. Either way, Howard's musical debut comes off as heartfelt as it is handsome.

Joan Anderman can be reached at anderman@globe.com. For more on music, go to www.boston.com/ae/music/blog.