A master song interpreter takes on a new generation 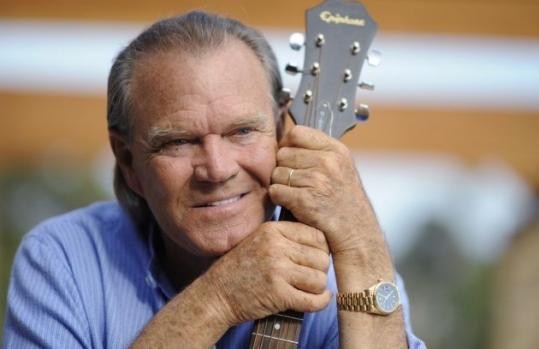 Dusting off country legends, diverting their tour buses away from Branson, and placing them in front of a studio microphone has become a popular sport among influential young'uns such as Jack White and Rick Rubin, who excitedly relaunched their heroes Loretta Lynn and Johnny Cash for the set. When Dolly Parton's sequin-suited sparring partner Porter Wagoner was brought back for a musical makeover shortly before his death last year, it seemed that the entertainment in our nation's casinos was finally being properly honored.

Honey-voiced Glen Campbell was not a hard-living rogue like Cash or Wagoner - well, not until problems with drugs and alcohol surfaced after chart success faded. Fittingly, Campbell's reintroduction to contemporary music on "Meet Glen Campbell," his new album out today on Capitol, lacks the emotional wallop of Cash's Rubin-produced comeback.

But Campbell's biggest hits were subtle, Jimmy Webb-penned daydreams that stretched lazily over layers of symphonic pop. That mood is exactly what producers Julian Raymond and Howard Willing attempt to re-create as they guide the 72-year-old Campbell through cover versions of songs by Tom Petty and the Heartbreakers, U2, and Green Day.

There are positively thrilling glimpses of Campbell's immense talent for interpreting country-pop as he charms his way through the Foo Fighters' "Times Like These." This song induces the same goosebumps that surface during the languid chorus of his 1968 hit "Wichita Lineman." Campbell's laid-back approach and now-weathered voice are also a natural fit for Tom Petty's "Walls" and "Angel Dream."

There are times on "Meet Glen Campbell" that Raymond and Willing appear to be under the impression that they are producing a comeback for Roy Orbison. The album's opener, a note-for-note cover of Travis's "Sing" is dripping with big, echoing choruses and chimes that distract from what should have been left as a simple, scaled-back arrangement.

Campbell proved that less is best with the beauty of songs such as "Dreams of the Everyday Housewife" during his salad days, and Raymond and Willing would have been better served focusing on that period of Campbell's career, rather than evoking the ghosts of the campy "Rhinestone Cowboy."

What appear to be strange song choices on paper are risks that pay off. His version of U2's "All I Want Is You" reveals a soulful voice that is not always apparent on country-influenced songs. Green Day's prom theme, "Good Riddance (Time of Your Life)," has the potential to arrive as a tall glass of schmaltz, especially when served by a septuagenarian. Campbell keeps it sprightly and detached, and in the process makes the song something entirely new. Despite the treacly lyrics, his interpretation is forward-looking and surprisingly fresh.

And although he has his moments of sentimentality on John Lennon's "Grow Old With Me" and the Velvet Underground's "Jesus," Campbell is still a formidable interpreter of song who even overcomes heavy-handed production to remind us why he was always our favorite charismatic pop-music cowboy.