On 'Carter III,' Lil' Wayne perfects the art of the brag 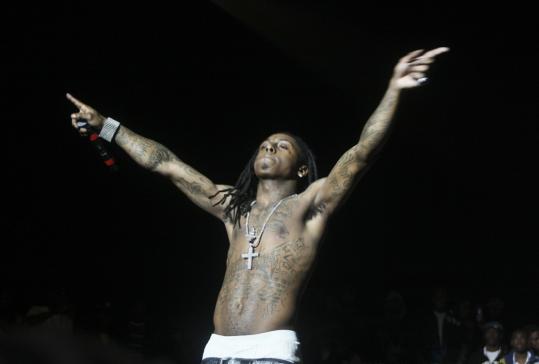 No one ever said Lil' Wayne was the best rapper alive before he started saying it.

Most people probably just remembered he was that scrawny-looking teenager who came in at the end of Juvenile's 1998 hit, "Back That Thang Up," and whispered, "Now, after you back it up, then stop/ Wobbly, wobbly, drop, drop it like it's hot."

Then all of a sudden he pressed the reset button. He started beating the rap world over the head with mixtape after mixtape, swearing he was the best rapper alive and sending not-so-subliminal messages by rapping over songs made by people considered to be the greatest.

He released the album "Tha Carter" in 2001, and it was like he got a do-over on his shot at a debut album. Then, not too long after "Tha Carter II" debuted at No. 2 on the Billboard charts, Wayne was already bragging about how great "Tha Carter III" would be.

Self-promotion doesn't get much better. It became the most-anticipated album of 2007, and gossip sites had binary countdowns to its release date. And ever since the original version leaked last June, Wayne has had an invisible gun to his head with the demand that he produce an instant classic.

But he wasn't in a hurry. It's as if he had made rap's version of Guns N' Roses' mythical "Chinese Democracy" album, and the buzz grew the longer Wayne stalled. After two years, one huge leak, a handful of pushed-back release dates, and a million feature appearances (we counted), "Tha Carter III" is out today. You can touch it.

That said, it's not an instant classic, but it is the best rap album since Kanye West dropped "Graduation" last year. But what made everyone buy into Wayne's fortune-telling was that he backed it up with his insane lyrics. He would rhyme "prodigy" with "protégé" and go on random tangents like how when he was 5 years old, his favorite movie was "Gremlins."

There aren't as many "what did he just say?" moments on "Tha Carter III." A lot of times it's just "didn't he already say that?"

Wayne actually makes two references to wrestler "Macho Man" Randy Savage on the album, two more than the legal limit. He gives an awkward shout-out to No Doubt ("Even Gwen Stefani said she couldn't doubt me") that doesn't make sense when you really think about it.

His focus is scattered for the most part, but he does dive deep into the brilliant combination of soft cymbal ripples, slowly ascending horns, and smooth bass strums from David Axelrod's "Holy Thursday" sampled by Swizz Beats for "Dr. Carter." Wayne has fun with a metaphor about curing bad rappers of their ailments; a nurse gives him all the symptoms, and you can almost picture him shaking his head at the clipboard as he huffs and says, "OK, lemme put my gloves on/ And my scrubs on/ Dr. Carter to the rescue, excuse me."

The fear was that the entire album would sound like "Lollipop," his current bass-heavy, synth-orgy hit single. Or worse, that Wayne would fall in love with his autotuned voice a gargling, growling mess that would never come up in real life unless a robot were somehow also a chain smoker. Chalk it up to a casualty of experimentation, but Wayne barely bothers rapping.

But then there's this toeing-the-ledge moment on "Playin' With Fire," where he yells like a maniac over heavy guitar riffs: "Assassinate me . . ./ 'Cause I'm doing the same thing . . . Martin Luther King did/ Checking in the same hotel/ In the same suite . . ./ Same balcony like 'Assassinate me.' "

That's brave considering MLK's most powerful words were "I have a dream," and so far Wayne's amount to talking about licking a lollipop.

But the martyrdom shtick comes too close to the Icarus trajectory that a lot of people want Wayne, a noted drug abuser, to follow, including maybe Wayne himself, who constantly compares himself to Tupac and the Notorious B.I.G.

This album was supposed to put him in that class, in his eyes at least. He says it on "Mr. Carter," a track with Jay-Z that sounds more like a favor for a favor after Wayne showed up on Jay-Z's "American Gangster."

But, honestly, Wayne's been saying that for years. That's how we got here in the first place.