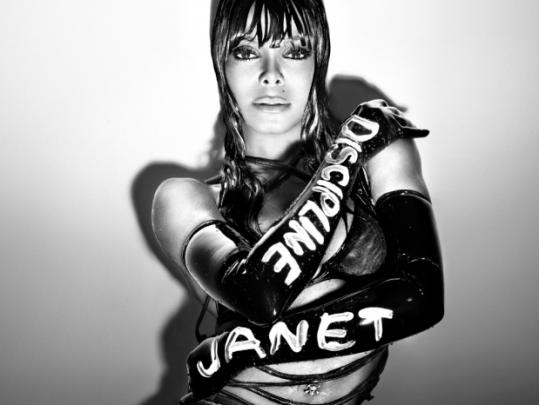 Artists desperate for a hit record usually don't make one. The need to reconnect with an audience seems to crush the very impulses - indulging a sense of adventure, finding a fresh perspective - that might seal the deal. But trying something new is risky, particularly when there are charts to climb and products to sell, so the default move is to repackage whatever has worked in the past.

On the heels of two disappointing albums and that notorious Super Bowl wardrobe malfunction, Janet Jackson found herself at just such a crossroads. Her star power and commercial clout had dimmed. She and her boyfriend/producer, Jermaine Dupri, left their longtime home at Virgin Records to make a new start at Island Def Jam, which releases Jackson's 10th album, "Discipline," today. A quarter-century into her career, it was Jackson's moment to take a breath, dig a little deeper, and make a bold - or at least a different - statement.

Jackson's decision to recycle the nympho routine one more time is just boring. Even Prince and Madonna, who find endlessly interesting ways to sing about sex, have discovered in the onset of middle age an opportunity to investigate alternative topics. On "Discipline" Jackson, now 41, follows her favorite blueprint, alternating narcotic spoken interludes with uptempo dance cuts and slinky jams. The droid-like lead track, "Feedback," also the first single, is built of metaphors and analogies: "Strum me like a guitar/ Blow out my amplifier/ When you hear some feedback/ Keep goin', take it higher." Compared to the hard-core dirty talk of 2004's "Damita Jo," this one is poetry.

Frequent collaborators Jimmy Jam and Terry Lewis were shown the door (Jackson's idea of moving forward), but their presence is felt on sunny, jungly "Rollercoaster," a song written and produced by Rodney Jerkins and one of the disc's few engaging tracks. Jerkins gets Jackson's sassy-sweet side, and - more impressively - she lets him. Jerkins's "LUV," another standout, is a plump, crackling confection. Dupri, however, ignores the need to salt his sugar and winds up with pure syrup on "Never Letchu Go."

Elsewhere Jerkins, Dupri, Ne-Yo, The-Dream, and StarGate have outfitted Jackson with plenty of thumping, mechanical beats, and the disc is loaded with numbing come-ons like "So Much Betta," "The 1" (featuring Missy Elliott), and "What's Ur Name," a glorified text message.

Maybe there isn't anything more to her. Maybe it's wishful thinking to imagine that Jackson would wear the family name like a badge of honor. There is one ballad, "Can't B Good," that's eerily reminiscent of "Human Nature," one of brother Michael's most elegant records. Alas, records don't sell much anymore, and Jackson is betting the farm that there's still a thriving market for heavy breathing.