Ray Davies is working out the kinks

He hits his stride with his second solo album 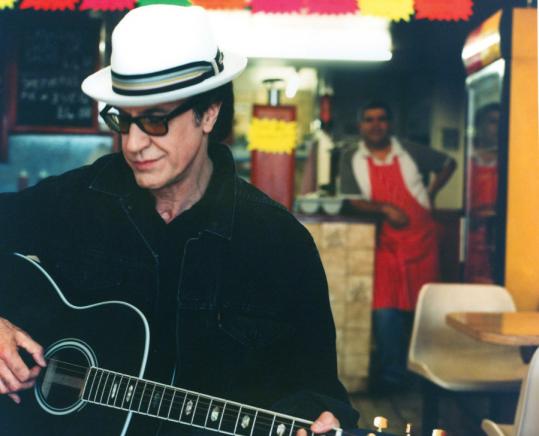 "You Really Got Me." "A Well Respected Man." "All Day and All of the Night." Ray Davies wrote all those, and plenty more. His songs have been covered by everyone from the Black Keys to Yo La Tengo, sold computers and laundry detergents, and pumped life into hipper-than-thou soundtracks ("Juno," "The Darjeeling Limited").

But that's history, and Davies's long-awaited official solo debut, 2006's "Other People's Lives," didn't offer much hope for the future. Murkily written and overproduced, the record was as bland as a bowl of shredded wheat left out in the rain.

So it's a welcome surprise to hear Davies on "Working Man's Café," a collection of twangy rock that might not stand up with the best Kinks work (what does?) but certainly marks his return as a maker of new music.

Recorded largely over 16 days in Nashville, the album, which will be released Tuesday on New West Records, finds the 63-year-old Davies returning to one of his strengths, the wry brand of social commentary that set the Kinks apart from the Beatles and the Stones. At his best, Davies paints pictures with lyrical detail and a Cockney accent that he can flip out faster than a Diner's Club card. And he's as guilty as the rest of us. When, as Davies sings on the title track, he buys a "pair of new designer pants, where the fruit and veg man used to stand," Davies isn't just a nostalgic bystander. He's a participant.

Sonically, "Working Man's Café" is also a triumph. Co-producer Ray Kennedy (Steve Earle, Lucinda Williams) favors a live sound with limited overdubs. That helps on Davies's still-strong voice, as well, which was often buried on "Other People's Lives." In an interview, he says he pushed Davies to resist holing up for weeks of post-production (for excerpts, go to boston.com/ae/theater_arts/ exhibitionist).

"He doesn't have the young toss-it-off attitude of early Kinks, but he still has the chops, attitude, and determination," Kennedy said. "The difference now is that he is very critical of his delivery and he does his best when he's not analyzing but just belting it out."

Davies certainly does that on the album's opener, "Vietnam Cowboys," a rockabilly song that laments the spread of cheap, overseas labor. "You're Asking Me" is pure, '60s-inspired power-pop: jangly guitars, a rich hook, and soaring harmonies. The song also finds longtime Kinks drummer Mick Avory checking in on tambourine. (For those wondering, famously feuding brother Dave Davies did not participate, though Kennedy said he and Ray talked about him repeatedly during the sessions.)

The battlegrounds on "Working Man's Café" aren't only economic. They are also romantic, political and, in a few songs, a little bit of both. On "Peace in Our Time," Davies uses the language of warfare to pick the bones of a broken relationship. Kinks fans will appreciate the way the chorus resolves, a descending guitar-line that sounds as if it could have been nabbed from a "Village Green Preservation Society" outtake.

Even better is "One More Time," which links a failed courtship with a longing for the old ways. It is the prettiest song Davies has written in years, a ballad that stays in your head long after the music fades.