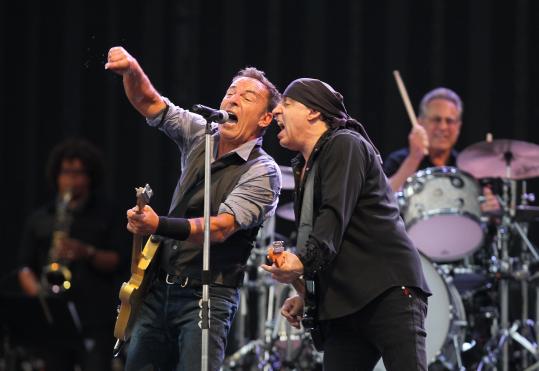 Five minutes from Fenway Park a new breed of T-shirt cropped up on the streets Tuesday night. In the familiar Red Sox font, the messages read ­“Bosston” and “Dancin’ in the Park.” Another one said “Bruce” with the ­Citgo appearing in the corner.

Savvy business venture? Sure. But those shirts also spoke to the incredible draw Bruce Springsteen has in this town. Tuesday’s sold-out show — a tour de force of old-school showmanship and heartfelt connection with the audience — was a testament to why.

It was the first of two nights before Springsteen and the E Street Band head to Gillette Stadium on Saturday. Springsteen had been to Fenway for a triumphant two-night stand in 2003.

The thing to remember about Springsteen’s concerts is that the first hour, as solid as it is, is always a warm-up. It’s as if he and his longtime backing band need to wind all the way up before letting all hell break loose; how telling that Springsteen’s energy was higher two hours in than it was at the top of the show. Clearly he and the band feed off not only one another, but also the enthusiasm of the crowd.

Starting with “Atlantic City,” they hit a stride and rarely let up. A triple attack hit hard: “Because the Night,” “Johnny 99,” and “Darlington County.” “Because the Night,” which Springsteen co-wrote with Patti Smith, gave guitarist Nils Lofgren a starring turn. Literally: he twirled at warp speed while playing a punishing solo.

A five-piece horn section prominently featured Jake Clemons on saxophone. He’s the nephew of the late Clarence Clemons, who later, during “Tenth Avenue Freeze-Out,” was lovingly presented in a silent video montage that drew rapturous applause.

Songs from the group’s new album, “Wrecking Ball,” had more muscle but also nuance that’s not as apparent on the record. “Shackled and Drawn,” with its chain-gang stomp, was fervent with gospel overtones, while “Jack of All Trades” exuded a quiet grace. And “We Take Care of Our Own” was a ­poignant addition to Springsteen’s canon of songs about compassion and the human condition.

They somehow shoehorned an ­awful lot of classics into the final hour without making them feel rushed: “Thunder Road,” “Born to Run,” “Rosalita (Come Out Tonight),” “Glory Days,” and “Dancing in the Dark.”

Sprawled onstage, Springsteen feigned exhaustion (or maybe that was genuine) after that last one, but he had one more jolt in him. Before wrapping up with “Twist and Shout,” he and the E Street Band tore into the Standells’ “Dirty Water,” just as they did at their Fenway shows in 2003, except without Peter Wolf this time.

Three and a half hours later, Springsteen parted with an announce­ment that was hard to ­believe: “We’ll be back tomorrow night!”

AND THE E STREET BAND