THIS STORY HAS BEEN FORMATTED FOR EASY PRINTING
Critic’s Notebook

The words and music of hatecore 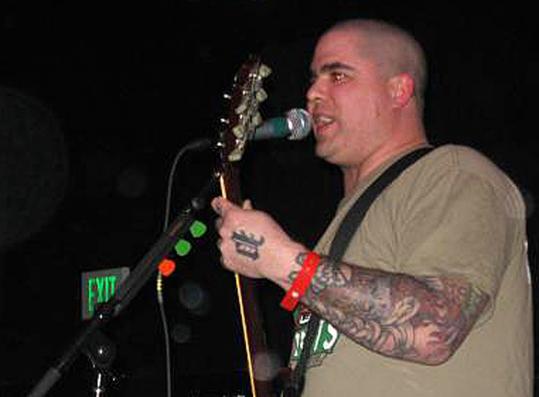 Wade Michael Page wasn’t a member of the neo-Nazi band Definite Hate when I interviewed the band in North Carolina in 2001. He apparently joined the band later, finding common ground in a universe that embraced a hatred for Jews and other minorities and believed in a world where whites could live separately.

Page, who law enforcement officials say entered a Sikh temple in Oak Creek, Wis., Aug. 5 and allegedly opened fire, killing six before fatally shooting himself, has now become the face of the shadowy white power movement. According to reports, Page, 40, a discharged Army veteran and former truck driver, had for more than a decade played bass in white power bands, including End Apathy and Definite Hate, a band I’d written a lengthy profile about for GQ back in 2001.

When I first heard about Page’s connection to the band, I quickly re-read the piece. Had he been in the band then? It appeared he wasn’t. To make sure, I dug out the number of a source in the white power music scene, somebody I hadn’t spoken to since 2001.

The hatecore community isn’t that big. The Anti-Defamation League estimates there are only about 140 hate-metal bands in the United States today. Sure enough, the source had met the shooter.

“Wade Page, when I met him, was a nice guy,” he said, as if we were talking about a parent on the playground. “He was a musician who more or less filled in. I don’t think he was in [Definite Hate] for any length of time.”

Did the source, who said he feared for his safety and didn’t want his name in the newspaper, agree with what Page did?

“I don’t,” he said. “It accomplished absolutely nothing and he lost his life with it.”

Years ago, the white supremacist movement adopted hate rock as a way to help spread its extremist message. And in the world of white thrash, Resistance Records was king. The record label was run by the National Alliance, the separatist organization founded by William Pierce, whose work would later inspire Oklahoma City bomber Timothy McVeigh. Pierce had a PhD in physics and no interest in punk rock. But he did believe in the power of hatecore.

“Imagine what we could do with these millions of aimless young white people if we owned MTV,” he told a National Alliance meeting in 1998.

In the wake of the Sikh temple shootings, media reports on the white power movement talk about how difficult it is to go and see such bands play. The Los Angeles Times described a process by which people are vetted over the phone, told to meet at a gas station, then met by large, menacing-looking, tattooed chaperones.

Back in 2001, going to see Definite Hate was relatively easy. I called Resistance Records and told them I was looking for a young and up-and-coming band on the label. Before long, I’d been invited to North Carolina to meet the band, watch them march in a Confederate Memorial Day rally, and finally go to a place called the Ossipee Ski Lodge and watch them play a show.

For me, a Jewish kid from Brookline with an English degree from Tufts, going into the woods of North Carolina to hang with a band whose first album included an ode to having the “[expletive] Jews burn again” was like a cultural anthropology trip to the moon.

The band was late for the rally, which included a short march and about 50 separatists cheering a guy from an organization run by sometime Louisiana gubernatorial candidate David Duke. When Definite Hate finally arrived, we met and shook hands. At first glance, they didn’t seem all that menacing.

The singer, Josh, was 23, razor-thin, and uncomfortable posing for a photo without a Confederate flag handkerchief partially covering his face. Dave, the bassist, had short hair, tattoos, and wore a white polo shirt. They hopped into their car to make the short trip to the “lodge,” which was a cinder-block building with an outdoor patio in which the band would play. It could have been any other dive in the country but for the decor. Inside the lodge, a noose hung from the ceiling around a mask of a black woman.

The organizers of the Definite Hate gig told me to make sure anyone I came with was as “light-skinned” as possible.

GQ sent Platon, the British-born photographer who is half Greek and has an olive complexion. A master portraitist who has photographed Bill Clinton, Barack Obama, Matt Damon, and Prince, Platon headed into the woods of North Carolina. He’d brought along an extremely nervous Jewish assistant.

Platon knew what he wanted, particularly as he was collecting photographs for his first book. He got the kids into a dark garage with a concrete floor and sheet metal walls. He set up all his fancy equipment and then he riled them up.

“Show me your rage,” he shouted in his British accent.

They growled. They flexed muscles. They raised their arms in a Nazi salute.

He got some great shots. And then he left. But the beer continued to flow and, by late afternoon, some of the concertgoers started to turn on me. One grabbed my tape recorder and stuck it in front of my face.

“Tell me your heritage,” he screamed. Another shouted, “You’re a [expletive] Jew! From the [expletive] ADL!”

I’d made up a cover story (I told them I was Protestant, non-practicing) and tried to remember that this rage was probably partially for show. I kept my cool. Get any group of humans together, give them some mind-altering substance, and groupthink sets in. So does bravado and the sense of invincibility.

And that’s why I stuck around that night.

I could have taken off, headed back home, and had a perfectly good story about this menacing subculture. But Josh, the singer, told me I could come over and visit him at his apartment the next morning.

It was a nondescript, well-kept complex. Josh shared the $500 a month rent with Dave.

Inside, I found some of the residue of white hate – Hitler’s “Mein Kampf” on the bookshelf next to Frank McCourt’s Pulizer-winning “Angela’s Ashes” — but in general, the apartment was not unlike the place any 23-year-old living in a dingy, nowhere town might rent.

As I spoke with Josh, he outlined a kind of boilerplate philosophy of the white power movement (“We want our own land. Like the Jews want their own land . . . ”). We also talked about his hopes of going to a community college and getting married. We talked about having kids someday.

Away from the crowd, Josh was much less extreme than he had seemed the night before. Then he talked about being onstage. Of the feeling he got when he looked out and people were singing along. They knew his music.

“My biggest high is when I’m onstage and I’m playing,” he said.

That, to me, was the best way to end the visit, and the GQ story. I’d played in bands in high school and remembered that feeling. And even if the songs weren’t the same, I could understand how it felt to stand in front of a crowd and be heard.