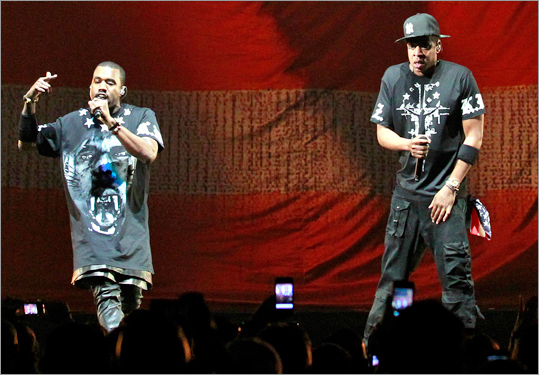 There were rumors of a deejay slated to serve as an opening act; none appeared. The headliners didn’t show up until 25 minutes after their scheduled start time. And so, almost half an hour late and with no warm-up, Jay-Z and Kanye West took the stage at the sold-out TD Garden last night. They fired the crowd up instantly.

That’s because, with all of the publicity given to Jay-Z for being an entrepreneur of cool and for being half of pop music’s reigning power couple and to West for being a loose cannon with a habit of shoving his foot in his mouth, it’s easy to forget that they’re both just staggeringly good. Last night served as a powerful reminder.

They began on separate stages on opposite ends of the Garden, delivering the dark, threatening “H.A.M.’’ to one another across a sea of fans. They soon joined together, but after a fistful of cuts from their recent “Watch The Throne’’ collaboration, they took solo turns, trading the spotlight and coming back together every few cuts. In one astonishing run, West’s fierce “Jesus Walks’’ led to the shared “Diamonds From Sierra Leone’’ and then a handoff to Jay-Z for “Public Service Announcement (Interlude).’’

Despite the elevated cubes with video-screen walls, plumes of fire, wafting smoke, and a repeated theme of aggressive-animal imagery, the show’s staging was minimal, almost spare. With the exception of the occasional moment like “On To The Next One,’’ where an unlit Jay-Z was only visible on the video screens in the negative, it was largely just two guys rapping on an empty stage.

It was enough. Clad in a black leather kilt, West was the one who allowed himself to get carried away, jumping to punctuate the downbeat of the first verse of “Good Life’’ and running from the back of the stage all the way to the edge on “Touch The Sky.’’

By contrast, Jay-Z was always in control, often doing so little that it was easy to miss just how much it rolled out of him on account of its effortlessness. From time to time, he’d nod his head as he rapped, an unspoken little “yep, that’s right’’ that underlined the infinite possibility of “Empire State Of Mind’’ and the swagger of “Where I’m From.’’ West gave himself over to the beat. The beat gave itself over to Jay-Z.