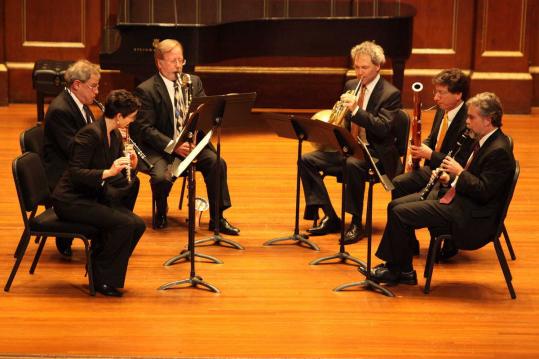 The Boston Symphony Orchestra Chamber Players are going regional this season, with each concert devoted to music of a particular locale. Sunday’s season opener centered around what is now the Czech Republic. But the music offered border-crossing travelogues both interior and exterior.

Leos Janacek’s “Mládí’’ (“Youth’’) was composed from the vantage of an old man regarding his past, but undercuts golden-haze nostalgia with the composer’s customary harmonic bite. This performance, though, was summer fun rendered in determinedly autumnal colors, tempered by a slightly measured pace and sepia-tone sonic varnish. In a way, the group’s playing was almost too proficient: Janacek gave his ensemble a theoretically boisterous, bottom-heavy foundation - horn, bass clarinet, and bassoon - but James Sommerville, Craig Nordstrom, and Richard Svoboda, respectively, were gossamer-smooth, furnishing flutist Elizabeth Rowe, oboist John Ferrillo, and clarinetist William Hudgins with more old-master varnish than adolescent brass. But an undeniably decorous charm prevailed.

The Bohemian-born Bohuslav Martinu’s 1929 Sextet seemed more fully assimilated into the stylishly scandalous milieu of 1920s Paris. Rowe, Ferrillo, Hudgins, and Svoboda were joined by bassoonist Suzanne Nelsen and pianist Vytas Baksys in a performance of deceptive ease, dexterous salvos of syncopation. Indeed, the Sextet is unabashedly jazzy, though Martinu’s polish and casual eloquence make for a seriously refined party, the flappers wearing pearls of inestimable quality, the punch spiked with XO cognac.

In one “Divertimento’’ movement, flute and piano steal off for a lively conversation of chic non sequiturs; in another (as well as in the grave “Adagio’’), Martinu recasts his bluesy harmonies as both up-to-date and mysteriously archaic at the same time. Rustic accents only rear their head in the finale, and even then only in translation, like a society orchestra taking a whack at, say, Antonín Dvorak. The playing was the afternoon’s highlight, carefree and cultivated in equal measure.

Dvorak himself filled out the program, the stage taken over by strings (violinists Malcolm Lowe and Haldan Martinson, violist Steven Ansell, cellist Jules Eskin, and bassist Ed Barker) for his Op. 77 Quintet. The performance was all attack and exertion, forceful bowing and pouncing accents to the point that the vigor became curiously somniferous. Musically, even for all its Germanic propriety - the formalities of sonata, scherzo, and rondo fully observed - it was the concert’s most Slavic course; but eventually one felt lost in the Bohemian forest, the trees all starting to look the same.