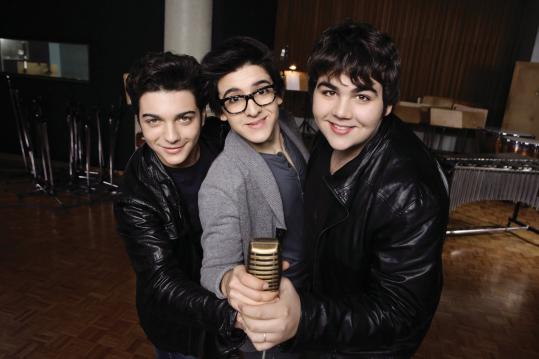 The cherubic teens of the Italian popera trio Il Volo - Piero Barone, 18, Ignazio Boschetto, 17, and Gianluca Ginoble, 16 - are already a hit in their home country with their 2010 self-titled debut, which includes new pop tunes written just for them by hit makers including Diane Warren, older favorites such as “Smile,’’ and enthusiastic renditions of classics like “O Sole Mio.’’ The album will be released worldwide later this year.

We chatted with Barone (inset, center) from a Phoenix tour stop recently about artists he loves and that he likes to listen to “at a high volume’’ before the group hits the stage. Although there were a few “lost in translation’’ moments with the genial teen - resulting in a High Four instead of a High Five - it’s clear that he and his pals are very excited about performing for new audiences on their current US tour, which comes to the Orpheum Theatre on Tuesday. The trio of tenors, who hail from different cities in Italy, chose the name Il Volo, says Barone, because it means “to fly.’’ “When we sing,’’ he says, “the music makes us fly.’’

1. Adele. Barone is partial to the British vocal powerhouse, name-checking “Someone Like You,’’ “Turning Tables,’’ and “Set Fire to the Rain’’ as favorites. He says her music puts him in the right frame of mind to perform.

2. Elvis Presley. The teen was introduced to the King of Rock by his grandfather.

4. Lady Gaga. “I love disco music,’’ he says, also citing jazz and blues as favorites. “We are young, we like all kinds of music.’’