US premiere of early Mahler’s First at NEC 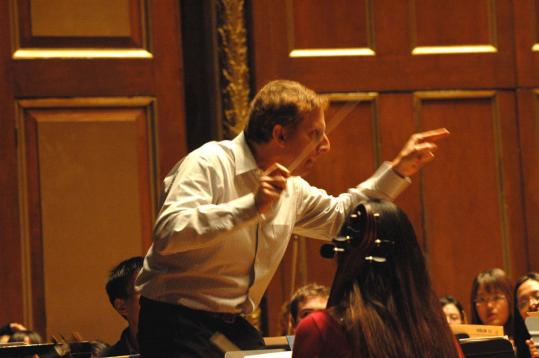 When the idea of doing a Mahler festival was being kicked around at New England Conservatory earlier this year, Hugh Wolff, the school’s director of orchestras and an eminent conductor, was tasked with coming up with some programs. He discovered that Strauss’s tone poem “Don Juan’’ and Mahler’s First Symphony had premiered within weeks of each other in 1889. He could program both works on opening night: Assignment complete.

Except that when he suggested it at the next planning meeting, Katarina Markovic, an NEC musicologist and Mahler expert, responded, “Yes, but do you realize that what was played in 1889 is not at all what we hear today?’’

That, Wolff says in a phone conversation, “was a fateful day.’’

Thus was born a project that will come to fruition on Monday: The US premiere of the earliest surviving version of Mahler’s First Symphony, similar to the version we know today yet with audible evidence of the young composer working through his early influences.

The First Symphony is a musicologist’s dream; it went through enough revisions to keep scholars occupied for years. To simplify greatly: Much of the music to be performed on Monday comes from a manuscript believed to have been prepared for the 1889 world premiere of what was then a five-movement piece called “Symphonic Poem in Two Parts.’’ The manuscript contains the first, third, and fifth movements of the piece in a copyist’s hand, with Mahler’s revisions and corrections written over. It was discovered in the 1990s in a collection at the University of Western Ontario, home of an archive of papers of Alfred Rosé, the son of Mahler’s brother-in-law.

It was this manuscript that Markovic brought to Wolff’s attention. So he spent much of this summer working with NEC composition student Kristo Kondakci to create a performance edition, trying to discern what was contained in its layers of information. They began work in mid-May and completed the project (the full score and individual parts) less than two weeks ago. “We were working on it constantly, through the night, in the early morning,’’ says Kondakci in a phone interview.

Wolff says he understands why no one has performed the piece before. Part of it has to do with the material’s fragmentary nature. The other part, he says, is that “it’s a bucketful of work.’’

The three movements they prepared correspond to the first, second, and fourth movements of the four-movement First Symphony we know. (Amazingly, the final version wasn’t published until 1906, by which time Mahler had completed Symphonies 2 through 6.) The two parts not in the 1889 manuscript are a movement called “Blumine,’’ which Mahler later discarded, and a funeral march, which is the third movement in the version commonly played. Wolff and Kondakci decided to use versions of these two movements from the next extant version of the symphony, performed in 1893.

What’s amazing to Wolff is that, with one significant exception, “the skeleton of what we know as the Symphony No. 1 is there, note for note. There’s almost nothing that’s familiar that will be missing.’’ The exception is the finale, whose development section Mahler rewrote substantially. Elsewhere, a listener will hear subsidiary material Mahler subsequently removed.

The major difference between the 1889 version and the final one lies in the instrumentation. Mahler advanced the cause of orchestration by light years during his career. Yet the 1889 symphonic poem was written for a Brahms-Bruckner orchestra, Wolff explains, “much smaller than any orchestra he wrote for later on.’’ Kondakci points to the deficiency of Mahler’s dynamic and articulation markings, much less sophisticated than what he would later produce.

“What I find so wonderful is that the full inspiration of the music is there,’’ Wolff says. “It’s not like anything needed to grow in terms of the structure or the shape of the music, with the exception of one movement. It’s all right there. What was changing was the sophistication and the detail of the orchestral palette.’’ The fact that it would take Mahler 15 years to make what were, in many cases, microscopic changes to the instrumental color “attests to his work ethic and fanaticism about clarity.’’

Regardless of how this version strikes listeners or whether it is taken up by other groups, working on it has already made an impact on Kondakci, a budding composer and big Mahler fan.

“For me, it was like seeing my master orchestrator when he was my age, in the same kind of state that I’m in right now, asking the big questions,’’ he says. “It was like going to class with Mahler instead of being taught by Mahler. It’s like that peer you have in class that you really look up to.’’

Of Monday’s premiere, Kondakci says, “It’s gonna be a blast, just looking at Mahler afresh. You never get to hear a Mahler premiere. It’s going to be new - and old - at the same time.’’