Dropkick Murphys and friends mix a potent brew at Fenway 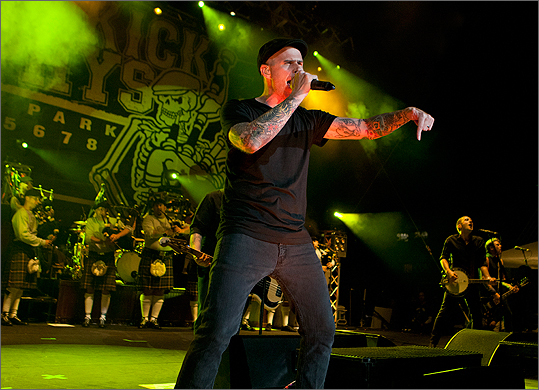 The Dropkick Murphys transformed hallowed ground into a hell of a time last night, when its six-band package of acoustic upstarts and Boston-bred punks converged on Fenway Park.

The Dropkick Murphys, Mighty Mighty Bosstones, and Street Dogs played to 9,000 people in the so-called Bleachers Theater, a main stage set atop the bullpen and facing the bleachers and right field seats. In the concourse next to Gate B (you know, the entrance near the Ted Williams statue), a smaller stage presented The Old Brigade, The Parkington Sisters, and Chuck Ragan. The whole shebang repeats tonight.

While the overt theme was a celebration of all things Boston, down to a cameo by the Stanley Cup, a more subtle undercurrent connected the boisterous energy of punk to the sincerity of folk.

The punk-folk dynamic has long been present in the Dropkicks’ music, and this Fenway fest - a precursor to the Shamrock N Roll Festival traveling version of the show - reiterated the kinship between folk and punk starting with a set of Celtic music by Boston’s The Old Brigade on the side stage. The storytelling and musicality of the Brigade’s repertoire flowed seamlessly into the Street Dogs’ main stage kickoff.

That sort of complementary nature of the two stages was intact for the rest of the show. The grizzled howl of Chuck Ragan on the side stage echoed the street-smart bark of Bosstone Dickey Barrett. After turning in a mesmerizing side-stage set, the fiddle-fueled Parkington Sisters fit right in as main-stage accompanists backing the Dropkicks. And the Dropkicks broke down a series of songs into simple acoustic settings midway through their 90-minute set.

The Dropkicks played a set true to their nature. Bassist and singer Ken Casey mentioned that the band contemplated donning jerseys, but then noted - as he and his mates stood on stage in traditional black T-shirts - that the crowd knew what it was getting into and needn’t be reminded of where the band’s loyalties lie.

The Dropkicks marched down to the stage from Fenway’s Green Monster to open the show but were not so regimented as to stick to a script. Casey proclaimed the band had no intention of playing its Red Sox rally tune “Tessie,’’ but they changed their minds midway through the show. The Parkingtons and pipers from the Bunker Hill Pipe and Drum Band came on and off the stage as the music dictated. It was loose and frenetic throughout.

The Mighty Mighty Bosstones and Dropkicks have been a great match ever since the Bosstones had the Dropkicks open for them in the 1990s.

The Bosstones kicked off their set with “The Old School Off the Bright’’ and proceeded to zig and zag through hits and deep cuts, hitting peaks with a slowed “Royal Oil’’ and heartfelt “Don’t Worry, Desmond Dekker.’’

On the side stage, The Parkingtons closed with a wild reading of “Ring of Fire’’ that brought out the siblings’ dad to play fiddle and Ragan to add vocals.

Ragan and his acoustic trio likewise had a big night on the small stage. The punk-trained singer brought that energy into the rustic tunes he now writes and found the right mix of fury and passion.

Scott McLennan can be reached at smclennan1010@gmail.com