How large will her legacy loom?

Pivotal in her time, Winehouse’s talents ran rich in potential 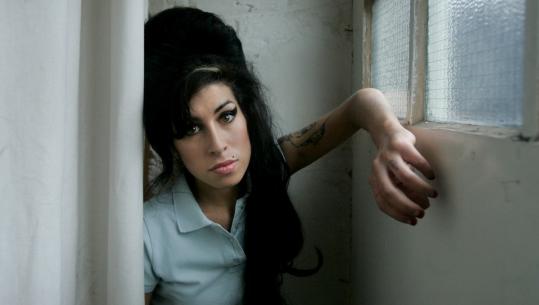 Amy Winehouse developed a sound and look that put her at the fore of a British retro-soul trend that included countrywomen Duffy, Estelle, and, Adele. (Matt Dunham/Associated Press)
By Sarah Rodman Globe Staff / July 31, 2011

Predictably in the wake of her death on July 23, of still unexplained causes, Amy Winehouse’s music has returned to the Billboard charts.

So the common post-mortem sales bump means that at the very least, more people will get to know the sometimes buoyant, sometimes brooding music that Winehouse loved to make.

Otherwise, is this anything other than an unremittingly dark tale? And was anyone who was familiar with Winehouse’s longtime struggles with substance abuse shocked by her death?

For many, there was surely real anger over the wasted potential. But once that recedes, and the veil of mourning is lifted, the question arises: What might Winehouse’s enduring legacy be?

It has been widely noted that she has joined a notorious club of other musicians who died at the far-too-young age of 27 after battling similar demons. Jimi Hendrix and Janis Joplin died in 1970, Jim Morrison of the Doors in 1971, and Kurt Cobain of Nirvana in 1994. Will Winehouse’s myth loom as large?

Ultimately, the answer lies in the mythmaking that is already underway. Will there be posthumous releases, biographies, films?

Given the degree to which Winehouse was already embroiled in her addictions at the height of her fame, it’s unlikely she will be assured an automatic place on the Mount Rushmore of doomed rock stars. Her downward trajectory, caught in the flashbulbs of our voracious tabloid media culture, was a very steep pitch. And because of that, her musical output was small and consistently dwarfed by the mess in her life.

Without a doubt, the British singer was gifted with a rich, soulful voice that expressed her woundedness with singularity and sharp honesty. Her personal troubles were not the only reasons she would draw comparisons to Billie Holiday.

She was a pivotal figure in her brief time. As a songwriter, and with the help of producer Mark Ronson and the expertise of Sharon Jones’s band, the Dap-Kings, at her disposal, Winehouse fused vintage and modern R&B sounds, with nods to Motown and Lauryn Hill. She developed a look - all beehives and tattoos, taking the supper club to the nightclub - that put her at the forefront of a British retro-soul trend that included countrywomen such as Duffy, Estelle, and the now phenomenally successful Adele, who cites Winehouse as an inspiration. (And let us all give thanks to Dusty Springfield while we’re at it.)

Yet that determinedly throwback sound may be a partial impediment to Winehouse ever achieving the mythic status of others in the “forever 27’’ crew. Sure, Hendrix, Joplin, Morrison, and Cobain drew heavily on existing styles to feed their own visions. But with just two albums under her belt, and only “Back to Black’’ (which was released in the US in 2007) widely known, Winehouse had yet to completely transcend those influences, to make you think only of her and not also of the shoulders on which she stood.

Their flames, too, spread more widely among their peers. Hendrix , Joplin, and Morrison in their era, and Cobain in his own, were voices of movements that reached beyond the music business, looked to by millions in their generation who felt they embodied their ideals, aspirations, and fears. What movement did Amy Winehouse embody? None at all. She was ultimately alone, singing confessional songs that people identified with deeply on a personal level.

While the demons of Hendrix, Morrison, Joplin, and Cobain were certainly chronicled - and obsessively so after their deaths - it was not with the all-consuming frenzy of today’s tabloid paparazzi. Winehouse’s every tortured stumble, slurred lyric, and sozzled utterance was minutely detailed in print, broadcast, and Internet media, all the way up to the YouTube clips of her disastrous final performance in Serbia. Winehouse’s songs opened the door wider to that kind of scrutiny; unlike some of her predecessors, her lyrics were never abstract or oblique regarding her problems. They were candid admissions. They may not have been an intentional “glorification’’ of her self-destructive habits, but they were part of her appeal - and you could dance to them.

Among the millions that knew Winehouse’s name, many were probably more familiar with her out-of-control personal life than her music, the way people might know who Lindsay Lohan is but have not seen any of her films.

And in this country at least, Winehouse gave few interviews and performances. On the night of her big five-Grammy haul in 2008, she had to perform via satellite because of visa problems, leaving even interested parties with only a vague sense of her personality, her thoughts on her music, even the sound of her speaking voice.

Notoriety is different from legend. And as we gawked at her under the magnifying glass, we never got a chance to know her sober.

Winehouse’s death is, like all deaths at such a young age, a heartbreaker. To music fans, that heartbreak is amplified by what could have been.

For the people who loved Winehouse in her lifetime and continue to discover her through the years, there will be gratitude that she made what she could in the time she had.

Winehouse was an artist who felt compelled to express herself, but probably didn’t worry about her legacy. That is part of the reason she will have one, whatever its size, be it immortalization in black-light paintings or the simple passing down of “Back to Black’’ from sibling to sibling or friend to friend.

As Adele said in an elegant blog post eulogizing Winehouse: “We believed every word she wrote, and it would sink in deep when she sang them.’’