Namesake composition to be played before ‘The Course of Empire’ paintings 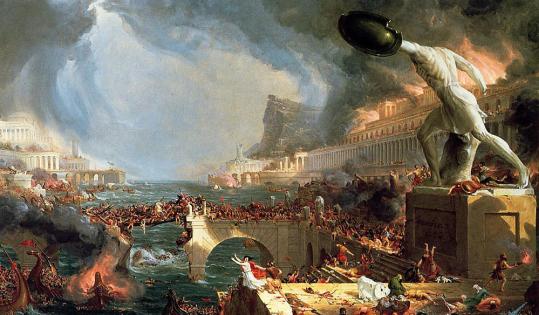 Nell Shaw Cohen first saw the five paintings that make up Thomas Cole’s “The Course of Empire’’ in 2008, during her freshman year as a composition student at New England Conservatory. Cohen is acutely attuned to inspiration from the visual arts, and it was a time when “I was interested in composing a piece of greater length and greater scope than what I’d done before,’’ she said during a phone conversation earlier this week. Cole’s paintings, which were on display at the New York Historical Society, turned out to be just the stimuli she needed.

The result was a five-movement string quartet, “The Course of Empire.’’ It’s been played once since it was composed, on an NEC composition recital, but Cohen has always envisioned a performance in the presence of the artworks themselves. That opportunity will come tomorrow, courtesy of a weekend festival called “Inspired by the Land’’ at the Peabody Essex Museum in Salem. The paintings will be on display, and Cohen’s piece will be heard twice, played by four members of the string orchestra A Far Cry.

Created between 1833 and 1836, Cole’s five large-scale canvases depict the rise, perfection, and destruction of civilization in the Romantic landscape style of the Hudson River School. The declinist narrative of the sequence is clear, yet even in the final two paintings, “Destruction’’ and “Desolation,’’ there is a sense of aesthetic beauty that softens the sense of moral decay.

Cohen has written a number of other pieces based on works of visual art, and said that in approaching these projects, “on a fundamental level, I try to make the music an expression of my own experience of looking at my paintings.’’ That can mean using textural effects to convey a mood. Or it can mean using specific visual objects as triggers for musical elements. In each of the Cole paintings, a cliff with a boulder on it is visible, the unifying thread indicating that the five scenes actually occur in the same place. So Cohen assigned the cliff its own musical leitmotif, which crops up throughout the piece in various guises.

Cohen has created a website, Beyond the Notes (necmusic.edu/beyond-notes) to go along with the performance. Far more extensive than the usual site devoted to an event or artwork, it contains not only reproductions of the Cole paintings and program notes, but a full performance of the piece and loads of information connecting the music and art. Cohen built the site with an entrepreneurial grant from NEC, and she envisions it as a platform capable of accompanying not only musical works - hers and others’ - but theater and dance performances as well.

“Art museums have taken advantage of interactive multimedia components for their exhibits much more extensively than most performing arts organizations have,’’ she said. “Especially contemporary classical music could really benefit from having that kind of resource for audiences, particularly because audiences are coming with fewer preconceptions about what they’re going to experience. An audience member might know more about Beethoven than they do about me, obviously, so I want to make up for it by providing a richer resource for them to familiarize them with the work.’’

A Far Cry’s new season Speaking of A Far Cry, the conductorless orchestra recently announced its 2011-12 season. In addition to five Boston concerts, the group will be on the road a lot, with performances planned in the South, Midwest, and New England. Among the repertoire on tap are arrangements of two canonical string quartets - Beethoven’s “Serioso’’ Quartet, Op. 95 and Shostakovich’s Eighth - a suite by Lully, Osvaldo Golijov’s “Tenebrae,’’ and John Adams’s “Shaker Loops.’’

Festival at Tanglewood The Festival of Contemporary Music, Tanglewood’s annual shot in the arm of new fare, opens next Wednesday with a concert devoted to music of this year’s festival director, Charles Wuorinen. The world premiere of his “It Happens Like This,’’ a semi-staged cantata on poems by James Tate, will be paired with “Never the Same Again,’’ written on another Tate poem for the unusual combination of baritone and tuba.

According to Wuorinen, the music scheduled is divided about equally among senior, mid-career, and young composers. Among the better-known names are those of John Zorn, Milton Babbitt, Brian Ferneyhough, and Tobias Picker. The clear winner for the Best Titled Piece goes to Chinese-American composer Fred Ho for “Fanfare to Stop the Creeping Meatball,’’ which opens four of the festival’s concerts.