Orchestra lifts off with Wilkins at the helm 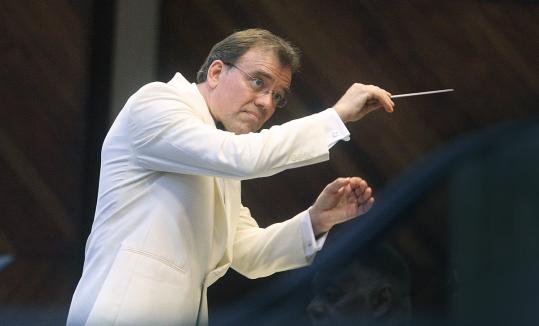 It was surely a coincidence that, among the composers’ names decorating the Hatch Shell, the “A’’ was missing from “Mozart’’ for the Boston Landmarks Orchestra’s all-Mozart concert on Wednesday. The orchestra was opening its first season without its founder, conductor Charles Ansbacher, who passed away last September, and whose zeal for bringing free music to every corner of the city formed the group’s mission. The orchestra and its new director, Christopher Wilkins, set about institutionalizing such charisma with the help of Mozart’s safely unassailable combination of quality and fame. A healthy crowd confirmed the formula’s appeal.

Wilkins called the program “about as sublime as it could be,’’ rehearsing the 19th-century romanticization of Mozart’s genius. The conductor drew a judicious medium between modern orchestral comfort and early-music celerity, founded on a solid rhythmic foundation. The overture to “The Magic Flute’’ nearly ran away at the Allegro before settling into a brisk groove. The familiar “Exsultate, jubilate’’ had similar energy, fueled by steadiness and springing downbeats. Soprano Dominique Labelle was the soloist; her sound was somewhat thin and breathy at the top, but she lavished creditable agility on the music’s profligate passagework.

Wilkins posited Mozart’s K. 427 Mass in C minor as a biographical narrative surrounding the composer’s marriage, then divided the story into tableaux, bigger contrasts between each number than within. Labelle was joined by soprano Kristen Watson, equally virtuosic but a contrast in tone, clean polished crystal to Labelle’s steel. Tenor (and Emmanuel Music director) Ryan Turner and, in enviable luxury casting, baritone Robert Honeysucker provided solo cameos. The New World Chorale (directed by Holly Krafka) was enthusiastic, but hazy and distant in the amplified mix. (The mix was better for an encore, Mozart’s “Ave verum corpus,’’ sung with satiny style.)

Amplification flattened out nuance and bloom, but was necessary to compete with the proximity of Storrow Drive’s cacophony: The Hatch Shell doesn’t lend itself to subtlety. But, then again, the point of the Boston Landmarks Orchestra is to make classical music not just in the city, but part of it, as much a soundtrack as the traffic, the T rattling across Longfellow Bridge, even the New England weather that rolled through the concert in the form of intermittent showers. And when Watson spun the Mass’s “Et incarnatus est’’ into the twilight like an endless jeweled chain, it was, indeed, pretty sublime. The “A’’ might be gone, but the music continues.

At: Edward A. Hatch