Del Fuegos are still on fire 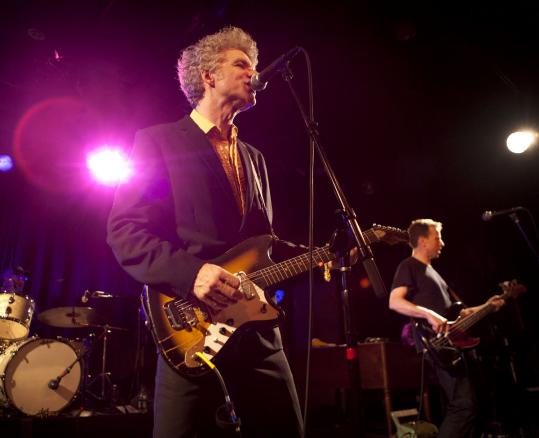 In the early days, a Del Fuegos gig spelled trouble. Prodigious amounts of alcohol on and off the stage. No designated drivers in sight. You practically needed bail money for the ride home. And the band was everywhere, blasting off in legendary, now-bygone haunts such as the Rat, Cantone’s, and the Channel.

Today is a different story. A tamer, cleaned-up but still exultant Del Fuegos — playing only their second reunion show since breaking up 21 years ago — reminded a sold-out Paradise crowd Thursday (in the first of back-to-back nights) of why they’re among the best Boston club bands of all time. They affirmed the quality of their Stonesy garage-rock with a performance that kicked hard and was for a good cause — helping drummer Woody Giessmann’s Right Turn, an Arlington-based addiction-counseling agency that will use the benefit funds to open a residential program this fall. (A DVD of the reunion is also in the works.)

“It’s a very emotional thing for us to be here tonight,’’ said Fuegos frontman Dan Zanes, who was on break from his Grammy-winning children’s music career. The band started slowly, but built in intensity and was raging by the end. Zanes’s brother, Warren, glistened on guitar leads while Giessmann (twirling his sticks at times) and bassist Tom Lloyd (a perennial smile on his face) powered the rhythm section.

The song list was plucked heavily from their first two albums, 1984’s “The Longest Day’’ (spiced by a yearning “Missing You’’ and the whomping Bo Diddley beat of “Out for a Ride’’) and 1985’s “Boston, Mass.,’’ highlighted by gritty local hit “Don’t Run Wild’’ and Doors-flavored “I Still Want You.’’ They added great covers, too, from Brenda Lee’s “Sweet Nothin’s’’ to the Everly Brothers’ hit “Crying in the Rain,’’ dedicated to Rick Harte of local Ace of Hearts Records.

The Nervous Eaters, boasting original singer Steve Cataldo, opened with a fiery, punk-charged set that fit seamlessly. There was even a puppet show between sets by the Bluebird Theatre Company, featuring the Zanes’ sister, Julia. The 10-minute segment was about a father trying to tell his daughter of the mayhem of Boston’s ’80s rock era, complete with a photo of the Rat. It was a strange but right-on sideshow for this evening of vintage rock.

With the Nervous Eaters