The queen who turned to stone 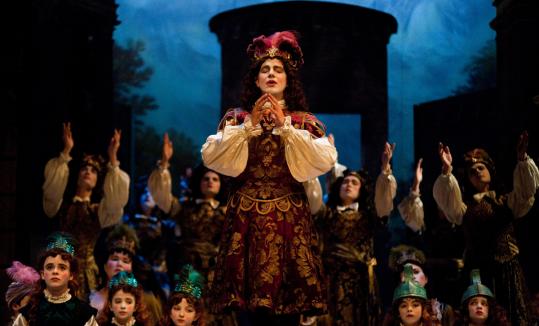 The biennial Boston Early Music Festival has returned, drawing our gaze toward yet another operatic spectacle lost to history. This year the work serving as BEMF’s centerpiece is a sprawlingly ambitious, memorably colorful, occasionally transporting work by Agostino Steffani called “Niobe: Regina di Tebe.’’ The opera, and the festival as a whole, opened on Sunday afternoon at the Cutler Majestic Theatre.

Steffani is a name hardly remembered today, even by opera insiders, but he lived a fascinating life (1653 to 1728) not only as a musician but also as a diplomat and later a bishop. He was born in Veneto, traveled to Paris where he probably met Lully, and spent most of his career in Germany. His biographer, Colin Timms, persuasively frames him as a kind of cross-pollinator of the Baroque, one who brought French and Italian styles into a meaningful synthesis in Germany, thereby helping to create the musical inheritance of Handel (who studied and likely stole from his duets) and Bach (who was born just three years before “Niobe’’ premiered in Munich). Yet as “Niobe’’ suggests from its first act alone, Steffani was not just a synthesist but also an inventive and original musical voice.

With a libretto adapted (by Luigi Orlandi) from Ovid’s tale of Niobe, the opera’s plot is easily summarized: the Queen of Thebes is punished by the gods for her hubris and pride. With her children struck down, her husband, Anfione, takes his own life in grief, and Niobe is so bereft she turns to stone. Steffani’s score is nonetheless epic in length. The composer himself made cuts, as did BEMF’s artistic team, but Sunday’s performance with two intermissions still clocked in at around four hours.

Despite the opera’s title, the composer saves some of his very best music for Anfione, a king in flight from the public burdens of kingship, seeking instead a life of peaceful contemplation. In Act I he sings an extraordinary aria of longing for that quieter life that might “refresh my tired soul,’’ the vocal line soaring over a distant and mysteriously beautiful consort of offstage viols. Elsewhere he is given brilliantly rageful coloratura, and a moving final aria. Even the libretto glorifies his singing, with one aria described as so powerful it causes the walls of the city to rise.

BEMF wisely recruited the excellent French countertenor Philippe Jaroussky for this role, and on Sunday he sang it with style, conviction, and at its more intimate moments, a poignant sweetness of tone. Soprano Amanda Forsythe took on the title role, giving a poised and vocally agile performance, if also one that felt a bit dramatically circumscribed, seldom reaching for the expressive extremes that Niobe’s music would seem to welcome.

The rest of the large cast was uniformly capable and sometimes more: Kevin D. Skelton was the Theban prince Clearte, Colin Balzer was Tiberino, who rescues the young maiden Manto, charmingly sung by Yulia Van Doren. Charles Robert Stephens was the priest Tiresia, Matthew White sang Creonte, and Jesse Blumberg was the magician-prince Poliferno. José Lemos provided earthy wisdom and moments of comic relief alongside his fine singing as Nerea, the Nurse. (Members of the PALS Children’s Chorus also participated with abundant care.)

Stage director Gilbert Blin has given us another thoughtful and meticulous period production — down to the hand gestures, by now a BEMF trademark — with regal costuming by Anna Watkins and elegant choreography by Caroline Copeland and Carlos Fittante. The dance music written for the original opera has been lost but the creative team seamlessly retrofitted the score with plausible substitutes. The BEMF orchestra, led by musical directors Paul O’Dette and Stephen Stubbs, did a superb job on Sunday in showing off Steffani’s unusually wide palette of colors and bringing to certain moments a chamber-like intimacy.

More generally, O’Dette and Stubbs seem to have access to an endless pipeline of works you’ve never heard but, if you have a core sympathy for Baroque opera, you’ll be glad to discover. (BEMF has already announced that its 2013 centerpiece will be Graupner’s “Antiochus und Stratonica’’ in its North American premiere.) The brand of musical archeology practiced here also reminds us that, to tweak a line from Herzen, operas have a libretto but history does not. There is, among all the other factors, an element of pure chance in what music has survived to the present. Steffani’s operas have not been lucky, but at least “Niobe’’ is now finally on view, enabling modern audiences to enjoy it coloristic riches and judge the bigger picture for themselves.