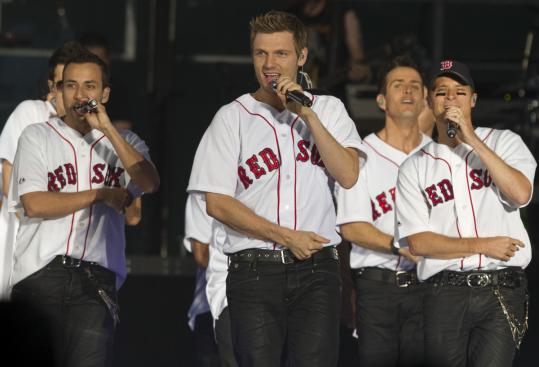 New Kids on the Block and Backstreet Boys delivered a set that was filled with their past glories. (Matthew J. Lee/ Globe Staff)
By Christopher Muther Globe Staff / June 12, 2011

It seems impossible, but the unrequited teen ache of “Please Don’t Go Girl’’ or “Show Me the Meaning of Being Lonely,’’ can still melt hearts.

At least the hearts of the lady-dominated crowd that defiantly stood in the pouring rain at Fenway Park last night to sing along with NKOTBSB (the lengthy string of letters merges the bands’ names while mercifully dropping the words “Kids’’ and “Boys’’ in the process). The power of these songs — which were once dismissed as Top 40 drivel — have aged as well as the men who sing them.

The fact that Mayor Thomas M. Menino came on stage to introduce the bands (flubbing the name) and Mark Wahlberg spoke before the start of the show underscores just how important this music was to two generations of girls, as well as Boston’s civic pride.

As the rain increased, these women didn’t budge from the venue, and the two bands rewarded that loyalty by playfully skipping and slipping across a soaked stage while delivering a set that was filled with their past glories.

Fans flooded Fenway Park with boisterous ear-blistering screams to herald the return of their Tiger Beat crushes. Those women might be a bit older now, but their lungs showed no signs of aging.

Not that the two bands did anything to dissuade the noisy adulation.

Most of the former heartthrobs are in their thirties, and in some cases early forties, but the show possessed an eerie aura of time travel. Through a gauzy lens — or perhaps it was the romance of the rain — it could easily have been 1990 (NKOTB) or 2000 (BSB).

The tight choreography still rode a fine line between manly swagger and Bob Fosse musical, and the soaring vocals — particularly those of Joey McIntyre — were as well-preserved as his abdominal muscles.

Poses were struck and biceps were flexed while fireworks erupted during NKOTB’s “You Got It (The Right Stuff).’’ It was a thrilling, guilty pleasure when the two bands overlapped for a combined encore of “Everybody (Backstreet’s Back) and “Hangin’ Tough.’’

Frenetic energy blasted from both the stands and the stage. The cold and wet night seemed to harden both bands’ resolve to have fun.

The production, which stretched over two hours, was nearly as slick as it was during their halcyon days. The New Kids held the hometown advantage. They also hold the honor of outselling the Backstreet Boys, and at one time they even voiced their own Saturday morning cartoon series.

One of the night’s most poignant moments came during the opening number when the two bands performed a mash-up of “Single’’/’’The One’’ while incorporating a slice of Coldplay’s “Vida La Vida.’’ The latter song rung particularly true as the bands rightfully sang “I used to rule the world.’’