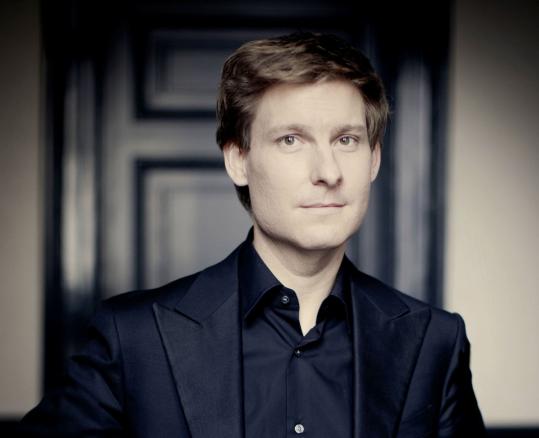 Kristian Bezuidenhout was in college the first time he tried playing the fortepiano, predecessor of today’s pianos. He was at the Eastman School of Music, and he had just played a Mozart sonata for Malcolm Bilson, a major figure in the early-music world.

Bezuidenhout had become, in his words, “crazily obsessed’’ with Mozart during his early years as a piano student. Yet for all his fascination, he had never managed to connect fully with the music while playing it on a modern piano, with its lush sounds and large dynamic range. And so Bilson, who had recorded all the Mozart piano concertos with conductor John Eliot Gardiner, invited Bezuidenhout to try out the fortepiano — the crisper, drier instrument that was in use during Mozart’s time.

“It was one of those things where the first feeling was overwhelming frustration,’’ says Bezuidenhout by phone from Freiburg, Germany, “because the whole action, the whole sound is so different. It’s not something you get used to in 10 minutes.’’ Yet something stuck, and after some “epic’’ lessons with Bilson, he was hooked.

“I could suddenly connect with Mozart on a very human and visceral level — on that instrument. And I could never feel that way at a Steinway up to that point,’’ he says.

The bond has been an enduring one. At just 31, Bezuidenhout (pronounced bih-ZAY-den-hoat) has become one of the world’s preeminent fortepianists and an increasingly important figure in the early-music world.

For a decade he’s been performing regularly at the Boston Early Music Festival and in its concert series. At the 2011 festival, which begins today, he will appear no less than four times, including a Bach harpsichord concerto with the BEMF Orchestra, a lecture-concert on the fortepiano, and a performance of Mozart’s two piano quartets with members of the Freiburg Baroque Orchestra.

“If schedules permitted, I’d present Kristian at every single biennial Boston Early Music Festival and in every annual concert series from now until the end of time,’’ wrote BEMF executive director Kathleen Fay in an e-mail.

He’s also affable and thoughtful in conversation, with an intelligence that belies his relative youth. He credits Bilson with helping him to unlock “this whole completely new world of looking at Mozart with this combination of historical information and with a sort of yearning for more color and more passion and more drama and more contrast. Which is something that no one had ever talked to me about, as far as Mozart was concerned.’’

Going the early-music route also made practical sense for someone for whom the prospect of being one more “Bach to Boulez’’ sort of pianist held little appeal. By contrast, “I might actually be able to have a life where I could be playing concerts regularly,’’ Bezuidenhout says. “Because there’s a market for this sort of thing, and people are interested in hearing these ‘new’ sounds and rediscovering this repertoire.’’

It’s something of a paradox that Bezuidenhout often uses the word “new’’ to describe the period-instrument approach to music, which is all about re-creating the past. And while that approach places a high premium on adherence to the details of the score, Bezuidenhout’s Mozart playing — which can be heard on two brilliant CDs of the composer’s music on the Harmonia Mundi label — reveals a freedom of tempo and phrasing not often found in the early-music camp.

Yet for Bezuidenhout, that expressive freedom is part and parcel of an “authentic’’ approach to Mozart. “I don’t believe that the sort of manipulations that I think happen in a really good performance of a Mozart sonata can really be expressed on the page,’’ he explains. “They happen in that magical moment where the audience hears something and waits for something and the player can stretch things.’’

That kind of expectation is crucial for a listener to connect with the often-shocking innovation of Mozart’s music, he says. “Not that I’m trying to every time make things new to the point where it becomes unrecognizable. But I think it’s important for things to be able to leap from the page in a way where you can imagine them being improvised at the moment.’’

It should be fascinating to hear what he and the Freiburg players are able to make out of the two piano quartets, works that are standards in the Mozart canon yet infrequently performed on period instruments. Bezuidenhout thinks listeners may be surprised at the difference from performances using the piano, which often dominates in modern-instrument renditions.

“Probably people will find a kind of rich string sound and a piano that kind of darts in and out of the limelight,’’ he says. “Which I love, because it’s a much more unified texture — it’s a lot less piano plus string trio, and a lot more about the melting lines between the two.’’

Kristian Bezuidenhout, fortepiano and harpsichord, in concert with the BEMF Orchestra (June 16); three other appearances (June 17, 18).