As Cults, couple is devoted to ’60s pop

And the indie duo is developing a following 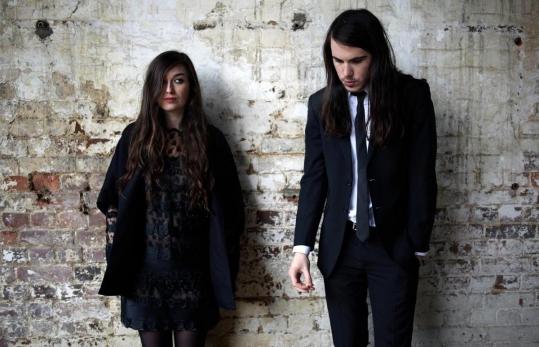 If you can remember how you felt at 21, full of wanderlust and raring to conquer the world, the new album from Cults will sound intimately familiar. More than the latest entry in indie rock’s revival of 1960s girl groups, the New York band’s self-titled debut is the sound of a young couple falling in love not just with each other, but also with the realization that they have nothing to lose.

Cults consists of Madeline Follin and Brian Oblivion, who were both studying film at New York University when they started experimenting with music more than a year ago. Initially, they posted songs that were meant for friends to hear, but then blogs picked up on the duo’s sticky-sweet pop melodies filtered through murky lo-fi production.

They were suddenly in good company with other bands conjuring a similar sound, including Best Coast and Dum Dum Girls. The attention was promising enough to encourage Follin and Oblivion to drop out of film school a few months ago to pursue music full time.

“It happened pretty naturally. Madeline and I would sit around the house and a lot of the music we both liked was ’60s pop,’’ Oblivion says ahead of Cults’ headlining gig at Brighton Music Hall tomorrow night. “Thematically, we had a good idea of what we wanted to get across in the songs. Musically, it was a matter of making music that we both would want to hear.’’

They intentionally took their time to release more music, wanting to make sure they were truly committed to it. In a tell-tale sign of how much indie bands are part of the mainstream more than ever, Cults got signed to an imprint of Columbia Records, which released its debut earlier this week. It was a surprising development for a group with such humble origins, and already Oblivion has been defending Cults’ decision to be on a major label.

“Number one, they’re awesome. They only came to the studio once, listened to one song, and were like, ‘Sounds great.’ Then we handed in the record and they said, ‘Perfect.’ Nobody’s ever given us a hard time,’’ he says. “I don’t know what happened. Nobody used to care what label you were on. Then suddenly it became this cottage industry where you’re not a cool band unless you’re on a cool label.’’

If anything, having a major label behind them has given Oblivion and Follin a wide promotional reach they wouldn’t have had otherwise. The buzz has been loud enough that Oblivion admits he doesn’t even read the band’s press at this point. “My mom forwards me every single thing ever written about our band, and I just delete it before I open it,’’ he says.

If he did read it, he would know that Cults has already been compared with other current boy-girl duos, from Sleigh Bells to Tennis. Cults doesn’t sound especially like either. For starters, no matter how featherweight and dance-minded the music often sounds, listen closely and you hear something more dark-hearted. On the album’s opening track, “Abducted,’’ they equate falling in love with the sensation of being kidnapped. On “Bad Things,’’ over samples of religious cult leaders preaching, Follin warns she’s going to run away and never come back.

“I think we try to distance ourselves from the bands people say we’re like just by being more enthusiastic and danceable and aggressive,’’ Oblivion says. “A lot of music people lump us in with is super dreamy and slow, and I don’t think we have any of that in our music.’’

Oblivion and Follin, who both grew up in San Diego, were already dating when they began recording as Cults. Their chemistry as a couple was strong enough that they figured they were also compatible to start a band.

“Madeline actually received an award in the yearbook in high school for the person most likely to get kicked out of a public restaurant for singing too loud,’’ Oblivion says. “She sings all the time, everywhere. She was always singing around the house and singing the songs I was writing. We developed the style of our band over time, but in the beginning it was just pure enthusiasm.’’

It has been out not even a week, but already Oblivion views the band’s debut as a time capsule.

“We’ll forever look back on this record as probably the happiest time of our lives,’’ Oblivion says. “What we wanted to get across with the record was total hedonism in our outlook on the world, but then also total enthusiasm, which is kind of our generation’s attitude. The world is [expletive] up, and we’re almost on the cusp of it going so bad, that it’s just worth having a good time.’’

With Guards and Writer