THIS STORY HAS BEEN FORMATTED FOR EASY PRINTING
CONCERT REVIEW

Characters of ‘Glee’ show off their talents 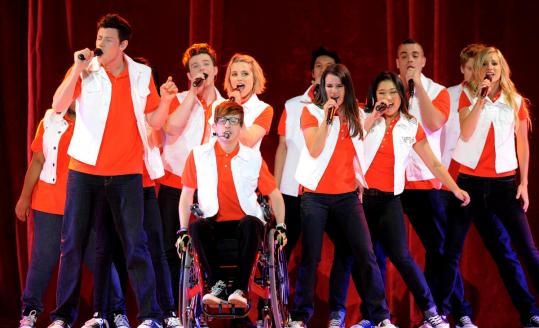 The cast of “Glee,’’ shown during a concert last month, performed Tuesday night at TD Garden, instead of Monday night, due to a Bruins playoff game. (Kevin Winter/Getty Images)
By Marc Hirsh Globe Correspondent / June 8, 2011

All that was missing was the grown-ups. Sure, Mr. Schuester and Sue Sylvester appeared in video greetings, but it was the students of “Glee’’ who were the actual, in-person stars last night at TD Garden.

And make no mistake: It was the students from William McKinley High onstage at the sold-out concert (rescheduled from Monday due to a playoff game), not the performers who play them. Jane Lynch’s despicable Sue cheerfully addressed the crowd with “Hey there, idiots!,’’ while Cory Monteith followed Chris Colfer’s and Lea Michele’s slow, lush mashup of “Get Happy’’ and “Happy Days are Here Again’’ by saying, “Let’s give it up for Rachel and Kurt!’’

That blurring of lines between reality and the show may have turned the concert into a live, 80-minute highlight reel from the show’s two seasons – Artie (Kevin McHale) stepping out of his wheelchair for “Safety Dance’’; Blaine (Darren Criss) and The Warblers cooing a creamy “Teenage Dream’’; everybody wearing T-shirts announcing their flaws on “Born This Way’’ – but it also kept a tight leash on what was supposed to be a celebration of the talents of young performers. Everybody was too busy playing a character to fully let loose, and it didn’t help that a few numbers (including “Single Ladies’’ and “I’m A Slave 4 U’’) were almost certainly lip-synched.

But those talents were real and often substantial (more substantial, in the case of Michele, than Katy Perry covers deserve). Alone on a satellite stage in the audience, Amber Riley nailed the gospel fire of Aretha Franklin’s “Ain’t No Way,’’ delivering the performance of the night. Heather Morris’s dialogue as good-hearted dimwit Brittany was lost in the crowd’s screams, but she danced with both precision and joy. And the mass of voices served Queen’s “Somebody to Love’’ rather well.

And the performers clearly knew their audience. With be-yourself anthems aplenty, they reached out and seemed to give a voice to teenagers learning to use theirs. If there was confetti involved, all the better. The adults would clean it up. 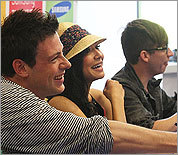 GLEE LIVE with the LXD (The Legion of Extraordinary Dancers)