Death Cab for Cutie gets intimate with diehards 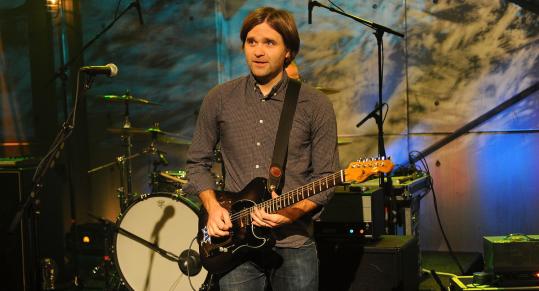 Five days after their new album was released, Ben Gibbard and his Death Cab for Cutie bandmates were rocking out in an unlikely spot: Paradise Rock Club. Routinely selling out arenas and theaters these days, they outgrew the venerable Allston venue’s 900-capacity confines several years ago.

But there they were Sunday night, packing in a sold-out crowd that understood it was witnessing a real treat. It was special not just for the intimacy, but rather Death Cab’s robust performance that easily could have galvanized a stadium. (Fans who got shut out should take heart: The band will be back in Boston at the Pavilion on Aug. 1.)

“It’s because we wanted to play to the hardcores,’’ Gibbard told the audience, explaining the band’s decision to squeeze into a club setting. “I myself never had a hardcore phase.’’

That’s for sure. Gibbard is not a flamboyant frontman (unless you count the numerous hair tosses), but he’s strident and puts across a song with conviction. There’s a reason why his diction is so crisp and his voice so steadfast: He wants you to hear and feel every word he says.

Gibbard’s sincerity struck a nerve early on during the nearly two-hour show, which featured most of the songs from Death Cab’s latest release, “Codes and Keys.’’ The album is more ambient and jagged around the edges than the band’s usual work, and guitarist Chris Walla, in particular, coated the new songs in a gauzy sheen.

The band worked from a far-flung set list, tracing Death Cab’s underdog indie roots to its bona fide star status on a major label. Newer songs (“Under the Sycamore,’’ “You Are a Tourist’’) felt like obvious extensions of older ones (“Photobooth, “We Laugh Indoors,’’ “The Sound of Settling’’).

Playing off the Paradise’s coziness, the band left Gibbard alone with his acoustic guitar for “I Will Follow You Into the Dark,’’ which rang out with the hushed echo of the audience singing it back to him.

As the slow build of “Transatlanticism’’ finally erupted into a full-on assault, the show had come full circle from intimate gathering to communal celebration. Putting down their instruments, the band members quickly dispersed, a few of them making a getaway through the Paradise’s side door. A van was waiting and promptly whisked them away. It was an odd exit for such a low-key show, but then again, rock stars will be rock stars.

With: the Lonely Forest